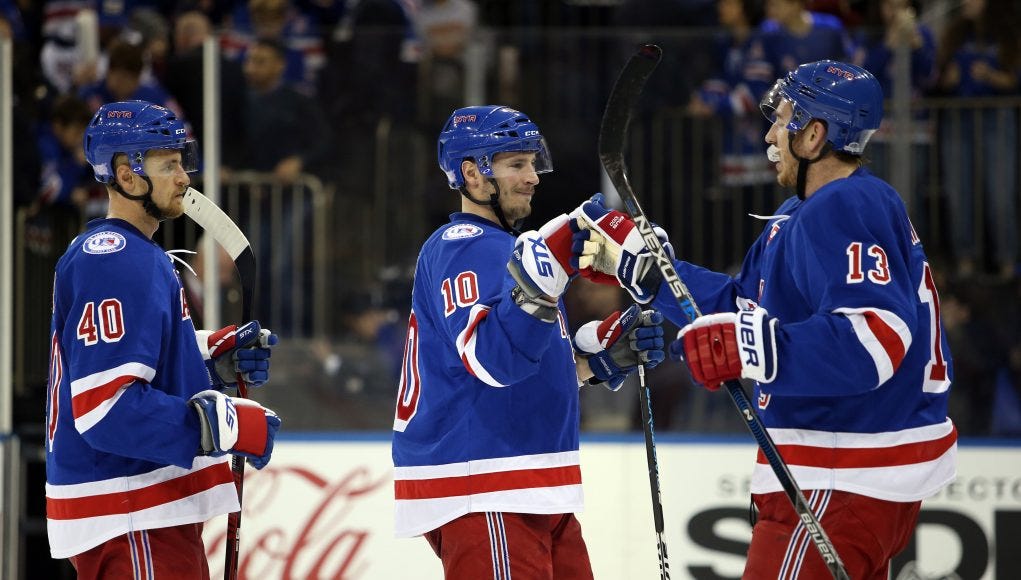 Perhaps the Rangers struggles were over exaggerated after all. The stretch that began after their 5-day bye week & ended with a brutal loss out of the All-Star Break seems like ancient history now that the Blueshirts have run off 4 straight wins to kick off February. It’s no coincidence that their success & Henrik Lundqvist’s return to form have come hand-in-hand. Over this winning streak, Hank has averaged 35 saves per game. Since getting demolished against the Stars, Lundqvist’s hung 7 W’s in 9 starts with 2.01/.938 peripherals. The only goalie better over that short span? Cam Talbot – who’s having himself a “peak Lundqvist” season in Edmonton.

Nothing short of a miracle is going to cure the defensive woes. They’ll continue to struggle with the puck in their own zone. They’ll continue to over-pursue & refuse to front opponents at the top of the crease. As long as the King isn’t watching floaters from the blue line go by anymore & is capable of stealing games like he did against the Ducks though, the Blueshirts can make some serious noise going through the Atlantic (hopefully) come playoffs.

The biggest reason the Rangers are a top-5 team in the league is depth & balance up front. Just about every single regular forward has caught fire at some point. Right now, the Kreider/Zucc duo & the line of Hayes/Miller/Grabner are en fuego. Kreids has gone more than a game without a goal just ONCE in almost 2 months. Zuccarello’s making plays to the tune of 25 points in his last 28 games. Grabner’s got 12 G in his last 14 & is tied with OVECHKIN for 4th most in the league. Hayes has cashed in 16 points in 13 games. Miller is 9th in the league in scoring since December 29th. These guys have carried the NHL’s second most potent offense lately while Step, Nash & Zib look to get into grooves of their own.

So what does the trade deadline have in store for the Blueshirts? I don’t think it’s going to be what we’re used to. Not only do I think Gorton will avoid their annual “dole out picks & prospects for a stud” routine, but looming expansion should have a significant impact on what teams do. Usually there’s distinct buyers & sellers at the deadline – but it makes sense that there will be some lateral moves as teams shuffle parts & prepare for Vegas’ cherry-picking. In that vein, it’s only logical that NY makes Grabner available. I went into it a little last month but will delve a little further.

You couldn’t ask for more out of Michael Grabner. The bargain-bin signing has paid off to the tune of 26 goals while averaging bottom-six minutes per game. His shooting percentage is sky high but that’s largely because his speed generates so many quality chances. In all honesty it should probably be higher. Grabs is also very sound defensively, is constantly breaking up plays with his quick stick & therefore leads Rangers forwards in SH ice time. You could make the argument he’s the team’s MVP.

If we were embarking on a regular offseason, moving on from him wouldn’t even be a thought – but we’re not. Expansion is coming and the Rangers cannot afford to protect any more forwards (Kreider, Miller, Zib, Stepan, Hayes, Zucc & Nash make up the 7). Maybe they’ll decide to float Nash instead – but if they do it’ll be a financial decision & I’m sure it’s one they’re not prepared to make in 3 weeks. With the season Grabner is having & 1 year @ 1.65M left, Vegas will snatch him up in a heartbeat. It would be silly to lose Grabner for nothing.

He’s not all of a sudden Pavel Bure – but he’s always had offensive upside. He tallied 34 & 20 his first two seasons, then 16 in lockout-shortened 2012-13. This isn’t completely out of nowhere. But goals aside, he’s still be a bottom-six asset on any roster with his speed & two-way play. Maybe you’re a contender or on the postseason border looking to make a push. Maybe you’re a younger team looking for cheap veteran depth or a squad that’d rather protect him & expose a bad contract come expansion draft. The Blueshirts aren’t gonna “fleece” anyone for the 29 year-old but there’s no denying his value is at its peak. No better time to sell.

The Rangers are deepest on the wings & need right-side D help in the worst way if they wanna have any semblance of a chance in the East. NY would most likely only take back an expiring contract though as they have no room to protect another blueliner (even if they buy out Girardi, they’d probably shield Holden at $1.65M & leave as much $$ as possible for Shattenkirk this summer). So if a team like the Sabres (6 points out) or Calgary (1 point out) want to make a run at a rare playoff appearance, Grabner is as good of a haul you could ask for in exchange for Cody Franson or Dennis Wideman – both upcoming UFA’s. Both squads could use two-way forward depth & you can’t tell me there’s 7 forwards on either roster that are slam dunks to protect over Grabner this offseason. His contract is dirt cheap so he won’t interfere with any free agent plans & at the very worst serves as an asset to move next deadline.

Franson or Wideman (they’d need to work out some of his $ with Calgary) are just examples & aren’t saviors by any stretch – but they are upgrades to the Rangers biggest problem. Besides whatever they’ll contribute on their own, it’ll help via “addition by subtraction” by shifting Girardi or Klein to the press box. If they decide to go after another left-handed defender that allows them to bump Skjei to top pair, that works too. Either way, the Rangers aren’t a legitimate threat as currently constructed. It makes zero sense to hang onto their biggest surplus only to lose it for nothing instead of taking a shot at strengthening a weakness if the opportunity presents itself. Last year, Kris Russell got back a conditional second-rounder along with a low-level prospect & a nobody at the deadline. That’s not gonna help these fringe teams – but Grabner can. Immediately. Let’s make a deal.