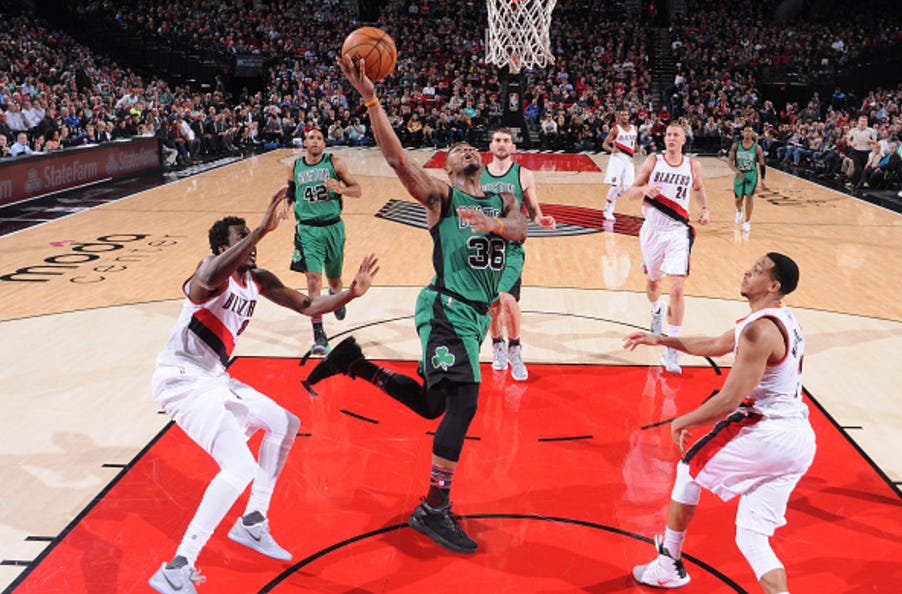 Already missing Avery Bradley, and then learning right before tip that Jae Crowder was going to be out (and probably will tomorrow too) the shorthanded Celtics faced an even bigger challenge when you factor in they were playing this game on a B2B. The way the second unit played in SAC, this probably gave you some concern, I know it did for me. After all the depressing quotes following a flat performance, this was a huge test for this group. Not in a sense that POR is good, and that beating them has any real impact on the playoffs, but from a mentality standpoint. The Celtics needed to win this game for their own well being, and the way that it happened 100% cures all the terrible feelings I felt after Wednesday night.

It is always a little nerve wracking when the Celtics are asked to stop one of the best backcourt duos in the entire NBA, especially without two of their best perimeter defenders. We all remember what both Dame/CJ did in Boston almost a month ago, and you can’t underestimate the weirdness of a West Coast trip. For much of this game it followed the script we just saw. But then the Celtics woke up, and showed us all an effert level, and a closing ability that gave us all this confidence in the first place. They are now 34-19, back to 2.5 behind CLE for the top seed, and back to 2.5 up on WSH for the second seed. A game like last night is a great example of why the NBA is so great. I don’t even remember how terrible they played against the Kings because the Celts proved to me that it was in fact what we all thought. A random one game hiccup.

So while you were sleeping, a lot of shit happened. Fortunately I think sleep is for weenies, so here’s what you missed.

– It is not everyday that a Celtics player can throw up 34 points (15 in the fourth) and we do not start with said player. You know what has to happen for that decision to be made? You need to have a performance so big, so impressive, so fucking awesome that it makes me forget about a player I am on record of being pretty fond of. Well, that is exactly what Marcus Smart did. Now, you know the rules, you have a performance like his, we enjoy it uninterrupted before we begin. Enjoy.

I’m not even sure that video does his night justice, but it’s like 2 in the morning and this was the best I could find. On a night where the Celtics desperately needed someone to step up and help Isaiah, Smart rose to the challenge and then some. When he throws up 18/6/5/5 and shoots 8-13 from the field and single handedly wins the game for you, I find it very, very hard to care about his shooting woes. We should have known this was coming, I mean he had a steal on basically the very first possession of the game. This may be a little outrageous, but was this not only the best performance of Smart’s season in my opinion, but was this his best game as a Celtic? I’m sure he’s had better scoring nights, but in terms of overall impact, his decision making, his execution, his ability to come through in the clutch, I’m leaning towards yes.

This is what I mean. It started at 2:11. Jaylen Brown had just missed another 3ft layup, and POR was on the break, ready to take momentum in the closing moments and tie the game. Instead, Smart doesn’t give up on the play, runs the entire court and snips Aminu from behind for a gigantic steal that immediately led to points. From there, take a look at how many times you see Marcus Smart’s name. 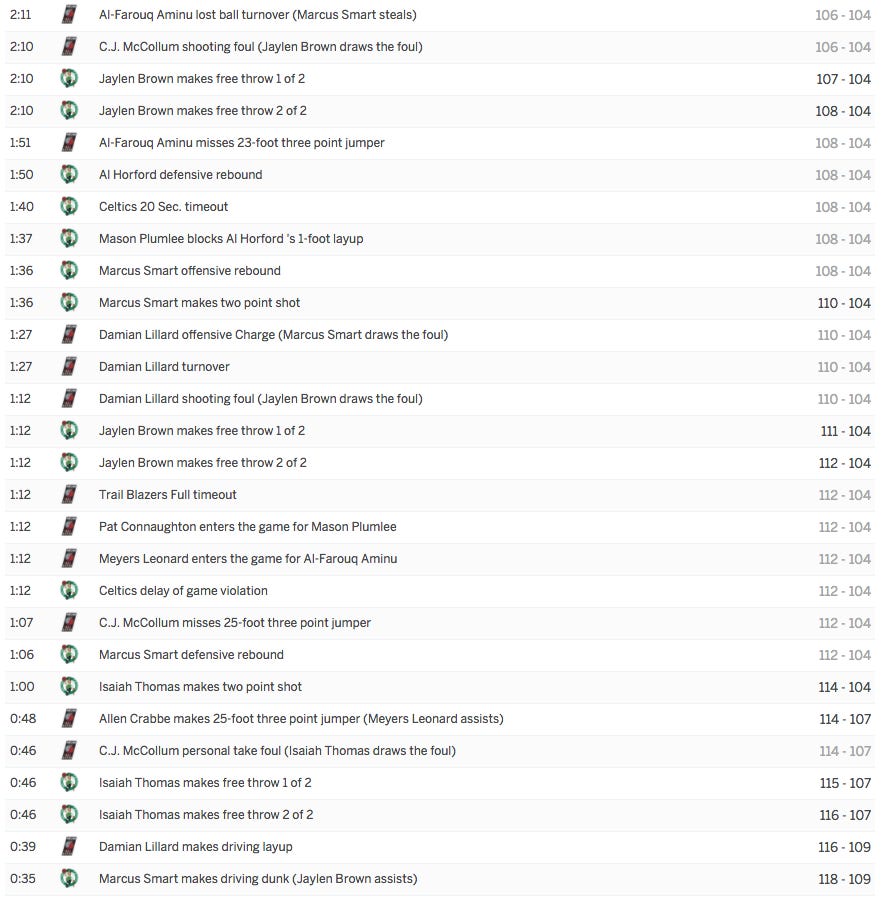 Offensive rebounds, defensive rebounds, layups, and a charge all in the last two minutes of what was a one possession game on the road on a B2B. That is some big time winning stuff right there, and the main reason why Smart is so fucking valuable to this team. The second he steps onto the floor, you feel him, and that is not something that can be said about every 22 year old NBA player. And this isn’t me just riding high off Kool Aid at the moment, it’s fact

I know we are all foaming at the mouth for Danny to make a trade, but after a night like tonight where we see how important Smart can truly be, I’m not so sure I am comfortable moving him. I know he might never become the shooter we all dream of, but again, I’m not sure I care and I’m not sure that will ever matter. Marcus Smart is a winning player who makes winning plays. You cannot put a price on that in my opinion.

– But now back to your regularly scheduled programming, Isaiah Thomas my lord. In the second matchup between him and Dame, I am confident in saying Isaiah outplayed him for the second time. After just two points in the first quarter, he did respond with a nice stretch to end of the second to help cut the 17 point lead down to six by half. That would obviously prove to be gigantic. But then he came out in the third and had just 3 points. The Celtics found themselves in another dogfight as they entered the final quarter, and we all know what happened next. He played the full 12 minutes and threw in 15 points on 4-7 shooting. Basically Isaiah did what Isaiah does, and all of the sudden POR couldn’t keep him out of the paint. It didn’t matter who they threw on him, you were either getting the quick hesitation, or he was taking the high screen and made plays for others (he had 3 assists in the quarter as well).

After a game in which I felt like Isaiah forced things a little too much, in the games most crucial moments, I thought he played within himself and within the offense. There was maybe one or two threes in that final quarter where Isaiah went for the kill, and while he missed them, I didn’t hate the decision one bit. His defense was probably OK at best, but it was good enough and that’s a win for me. As long as his defense is decent and he continues to do what he does offensively in the fourth quarter, I have no complaints.

Oh and for those who jerk off to +/- and use it as a main reason to knock Isaiah in the fourth, he was a team high +15, meanwhile Lillard who I keep being told is a better player, was a -5.

– You know who else needed to step up and came through and as a result is making me think thoughts I probably shouldn’t because he’s just a rookie? That would be Jaylen Brown. I am remaining firm that I don’t care about the missed layups at this point in his career. I care more about the process of how he repeatedly gets to the rim with ease at the NBA level. That spin move early in the first quarter? My lord. Look 12 points isn’t going to put him in the HOF, but again it was how he got them that makes me so excited. His jumper looks so much better, he is showing he belongs by getting where he wants when he wants, and most importantly he is rebounding very well for his position. I shouldn’t have to tell you why that’s important.

But how about Brad going with Jaylen down the stretch? That tells me he’s starting to earn Brad’s trust. We could have seen Gerald or Jonas late, but we didn’t, we got Jaylen and he rewarded Brad. This shot right here? Where did this come from?

Just wait till he realizes he doesn’t need to lay the ball up because he is a freak and can instead just dunk on people’s heads. Someone make sure he knows that by April please.

– I’m grouping them all together, but each had important contributions in their own right. The performance from the second unit in this game was like night and day compared to SAC. Kelly (13/7), Gerald (11 on 5/6 shooting), and Terry (11/4/5) could not have picked a better time to play this well. I’m especially happy for Terry because he was coming off an AWFUL game the other night, but again that’s the beauty of the NBA.

When you’re as shorthanded as the Celts were and playing on a B2B, you need your bench to have the starters back. You need someone to help Isaiah. When that happens, like it did last night, this team is incredibly difficult to beat.

– Want to put me in a good mood? Only turn the ball over 8 times.

– I want to take a second to talk a little more about that fourth quarter. Their 43 points set a new record, and to put how crazy the offense was in perspective, the Celtics had 49 points in the first half. The Celts had 60/50% splits in the final 12 minutes, and really they needed every last point. It’s pretty rare to see a team have that sort of outburst and show no signs of heavy legs. In fact it almost was the exact opposite, they got stronger as the game went on.

– Felt great to see 2007 Gerald make an appearance. Walter shit his pants when this happened and I can’t say he was alone

– I talk about effort, and it was everywhere. Celts won the rebounding, points in the paint, second chance points, and fastbreak points battle.

– As great as a win as this was, there was still plenty I did not like. For starters, what the hell is with the Celtics inability to stop Aminu? I know it happens literally every game the Celtics play, someone kinda shitty is going to have the game of his life, but this was legit ridiculous. Guy can’t shoot to save his life, yet turned into Ray Allen for some reason. So goddamn annoying. Also throw in the fact that the Celtics clearly have a Plumlee problem, and I can’t say this game was played without frustration.

– Nothing makes me more angry than seeing your 7fters refuse to even make an effort to rebound. How many times did the Celtics let the ball hit the floor off a missed shot, only to see POR get the OREB and then score, often with a three? I don’t know, maybe 50 times if I’m being generous. Tyler Zeller and Kelly Olynyk were the worst at this, and I know that shouldn’t upset me because it’s Tyler Zeller and Kelly Olynyk, but it does.

– The way the Celts started this game was very unsettling. They were the November Celtics, and had the same energy level that fucked them over in SAC. Absolutely no defense was being played, POR came out firing with another 30 point quarter to start, and really it didn’t get THAT much better. POR still shot 50% for the game, which is the very definition of playing with fire.

– Poor James Young. That is all I will say about this subject. I will not be answering questions. Thank you for understanding.

– I’m sure there’s something, but I am not even sure I feel myself type anymore. They get a pass.

So it’s on to Utah, who just lost a frustrating game last night as well. I was hopeful the Celtics would take this game and right the ship, and that’s exactly what they did. Finish this road trip strong, and head into the All Star Break with some momentum, that should be the goal. But for now, we celebrate. Say it with me