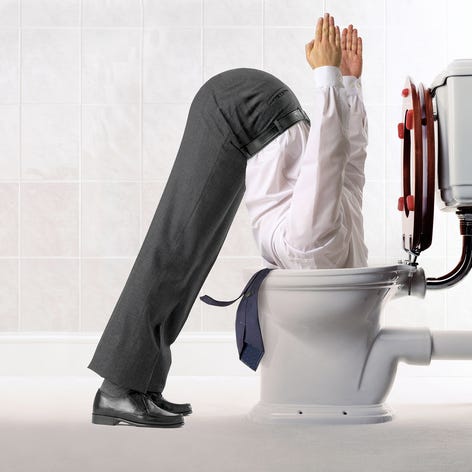 I’ve got food poisoning like a motherfucker right now. I’ve been up since about 2 AM, sweating, and laying in the kind of silence you only feel when you’re watching a movie and the monster is about to come find its hiding victim, because I was scared if I breathe or move then I’ll shit myself. I do that when I’m not firing out of both barrels like Wyatt Earp, and I brought hell with me. To be totally honest, I don’t completely hate it. I’ve heard food poisoning is a great weight loss technique plus, considering I’m the worst morning person going, I’ve had a pretty productive one. Nothing gets you moving like the realization that if you don’t get up right this second then you’re going to need to buy a new mattress and sneak your poop-covered one out of the building. It’s a shock to the system to which I can only imagine mainlining Jolt is comparable.

But this all brings us back to my main question… how many times can you get food poisoning from a restaurant before you say enough is enough? Because this is my apartment’s third time getting it from this particular bodega (I’m on lucky number two, Louis is at one). In my heart of hearts I know the answer is, “Once you get food poisoning you never go back,” but you haven’t heard the whole story: this bodega is really, really close. It’s actually really nice too, doesn’t give off a “this will not be enjoyable for you” vibe in the least. The facts say differently, however.

I know that this time should be the last time and I should swear it off forever, but as I sit here I’m not sure I can commit to that. This place is like a bad girlfriend who lives in your dorm: you know it’s going to ruin your night and potentially your weekend, but she’s one floor away and you’re hungry/horny. It’s the easiest fix and you just can’t quit it. That’s the burden us folk with an unprecedented dedication to laziness have to deal with every single day. Doesn’t matter if there’s a better solution, we take the easier one. If I was Robert Frost and two roads diverged in a yellow wood, I’d take the one that says “this road comes with diarrhea and nausea, but you’ll get where you’re going quicker.” Future John has to deal with the diarrhea and nausea, Current John is hungry and needs some food. Fuck Future John, I only look out for Current John.