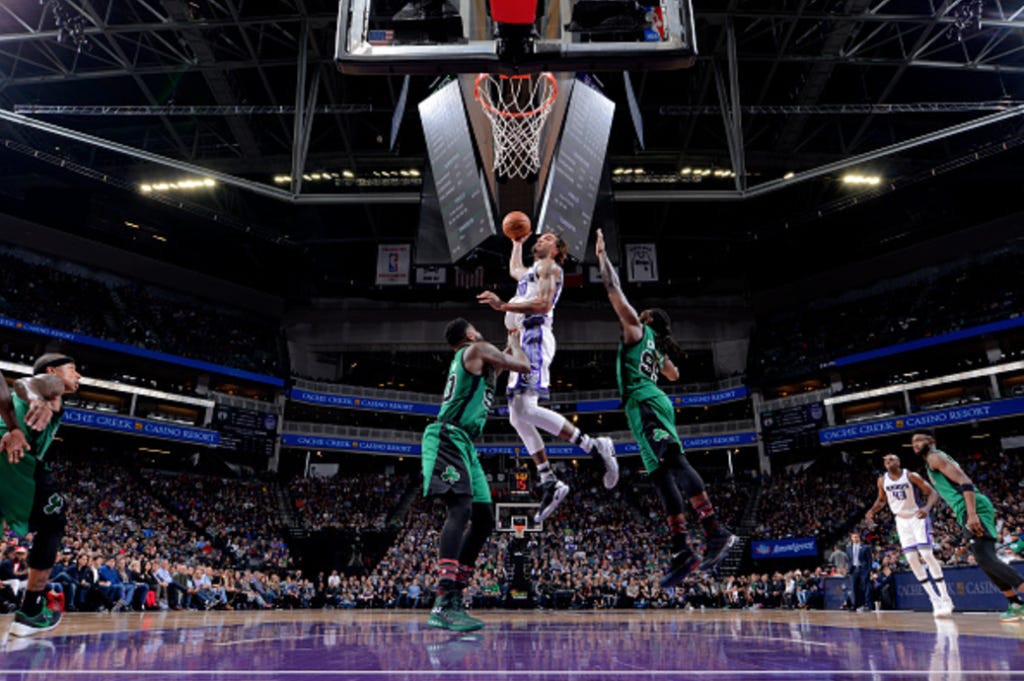 I can’t sit here and tell you that the Celtics played well in this game. This blog is a place for truth and facts, and I will not jeopardize my credibility which means oh so much by trying to spin this game away from what it really was. The Celtics played like absolute dogshit for 75% of this game. They messed with the Basketball Gods and those Gods showed why that is not something you should ever do. The Kings played harder, they played tougher, and they played with a shit ton of more energy. To put it simply, this game looked like the November Celtics. Remember those assholes? The ones who weren’t focused for games against NO, or DEN, or WSH and got absolutely manhandled? It’s no surprise that Grande had this little nugget after the game

So while I don’t think it’s right to completely let the Celts off the hook considering they are currently playing great basketball and were on a 7 game winning streak, I do think it’s important to understand that in the NBA, sometimes you have a bad night. We’ve seen enough since those dark November days to know what this team really is, and last night sure as hell is more the exception than the rule. Basically nights like this happen to every team in the league. CLE lost to NO without Anthony Davis, TOR just lost to MIN last night, so I’m not really overly concerned. The Celtics are still where we expected them to be, still two games up in the 2 seed, so I’m not going to get all hot and bothered.

We celebrate when they play well, and we take our lumps when they lay an egg. That’s how this works. You could argue they were due for a dud, and while that doesn’t make it any less painful, if you’re going to win 52 that means you need to lose 30.

– Since things are going to get pretty ugly in just a little bit, let’s start with some solid play from Isaiah Thomas. On a night he returned to where it all began, there were times I thought he forced things a little bit, but an overall 26/4/7 wasn’t the worst thing in the world.

I don’t know if I’m in the minority, but I cannot get enough of how much better a passer Isaiah is turning into. His ability to find little creases once he gets into the paint is a skill we are seeing more of this year than in years past, and that’s going to be really, really important come playoff time when defenses get tighter, and Isaiah probably won’t have as many open lanes to the rim. Isaiah led all Celtics in minutes in this game, but fortunately it was only around the 33 mark. I don’t think it’s an issue yet, but given his usage rate I’m keeping a close eye on his minutes as we head into the second half.

– This may be the highest we’ve ever had the Big Dog, but credit Amir Johnson. He is in fact not dead. By far his best effort in weeks, I can even get past the multiple 3PA because of how active he was. Seeing him go for 14/5 and 3 steals certainly doesn’t have me complaining, and let’s hope that SAC took notice. Not saying, just saying. Out of all the starters, I think the fact that Amir was the only one with a positive +/- pretty much tells you how things went.

Also if you had to choose which is uglier, the 3PA form, or the running hook form, who ya got?

– Why can’t I quit Kelly Olynyk? Partly because I am stubborn, but also partly because he gives me things like this

Is it sad that the two highlights I pulled to support my argument were a bounce pass and a putback layup? Maybe but this is my blog so I don’t care. What I found weird about Kelly’s night is that he took seven shots, but not one of them was a three. He continues to hit the boards (8), which is the second time in his last three games he’s had that many. He has his faults for sure, but 9 points 8 rebounds and 2 assists in just 14 minutes is nothing to sneeze at.

– I don’t know why they went away from it, but seeing Marcus got to the post early in this game made me so happy. It’s the most no brainer of no brainers for him. If you remember the 41 facts blog, he is almost twice as good a shooter once he goes into the paint/on the block. The way he can use his size to create space against opposing guards for an open 5 footer is extremely valuable, and maybe he best offensive skill.

Besides this. There was a story floating around the internet that talked about how Marcus Smart isn’t really a passer. Obviously a statement made by a person who has not watched one second of Smart play. Does this look like someone who isn’t developing into a legit passing threat?

That is probably a top 5 pass the Celtics have had all season.

– The thing I love about Isaiah Thomas the most, is he keeps it the very definition of real.

After each one of these bad losses the Celtics have had this year, Isaiah is the very first person to take responsibility and tell it how it is. He doesn’t make excuses, he doesn’t cry that his team needs playmakers, none of that. That’s the sign of the type of leader I want. This shit kills him the exact same way it kills all of us. The more you heard him postgame it was hard not to agree with him. Flat out saying it’s unacceptable to lose to a team that probably won’t make the playoffs. We can always rely on Isaiah to tell us the truth, and I respect that.

I do disagree a little bit though. This was NOT the worst loss of the year.

– OK where to begin. First, West Coast trips always feel a little wacky. It always feels that at some point during the trip the Celtics will play a shitty team who shoots lights out. SAC is a weird place to play, because while they suck, they have had some good wins at home. Obviously the worst part about this whole thing is it happened without Boogie, but when you hear the Celts talk about being outplayed, they aren’t lying.

First, I don’t care who you’re playing, it is going to be tough to win on the road when you give up 50/40% splits. And really that 3pt percentage doesn’t tell the whole story. The Kings lived around the 45% mark for the majority of the game. It’s not rocket science, but remember the trend of multiple 30 point quarters leading to losses? Well, guess who had multiple 30 point quarters. At the end of the day the Kings made their jumpers, got momentum, and took it from there. Aside from that first quarter, this was an absolute ass kicking.

– What probably makes this so frustrating to me, is guys like fucking Matt Barnes. Allowing this dude to go for 14/11/4 is just so goddamn annoying. He is averaging 7/5 on the year with 38/33% splits. Throw in a prayer game from Ben McLemore and WCS’s effort, and the Kings second unit was the story. This was an absolute bloodbath compared to what the Celts bench gave them. I’m talking about a 50-32 difference. In a game in which the Celtics starters couldn’t buy a basket, it’s really hard to win on the road when you get a no show from your second unit too, especially on both ends.

– I talked about playing with less energy, and the numbers reflect it. SAC won the points in the paint, rebounding, second chance points, and fast break points battle. A complete washing and it makes me sick.

– Part of the reason the Celts struggled so much in this game has to do a lot with their defense obviously, but I want to focus more on the bigs. We saw their lack of lateral quickness get exposed, whether it was Horford or Amir it didn’t matter. They had a really tough time staying in front of whatever guard they were switched onto. I’m not saying I expect them to lock down PGs or anything, but I would prefer to see a little better effort in containing drives. Too many times we saw Collison or Lawson get right around them with almost no resistance.

– The second quarter continues to haunt me, and we even got a little visit from the Theory. A great first quarter, followed by a shitty third, which followed a shitty second, and was the prequel to a shitty fourth. Gross.

– Speaking of the fourth quarter, it was a 6 point game heading into the final frame. Isaiah came back in around the 10 minute mark, and he took just THREE SHOTS in the quarter. Um, did they forget he is the best fourth quarter player in the league? To put it in perspective, Gerald Green took four. At a time when the Celts are usually at their best, they laid an egg. Closing the game with 33/25% splits is not going to get it done, and when you factor in the lack of defense, it no surprise that lead blew up to 20 at one point.

– It is really hard to win games when Crowder/Horford/Smart shoot 7-21 and Jae doesn’t even hit a shot. We heard the guys talk about how they can’t rely on Isaiah to drop 40 in a quarter, and that’s true to some degree. Do I think Jae Crowder going 0-fer is for real and should give us concern? No. Players have bad shooting nights, and in a make or miss league, that’s basically what happened.

– The inexcusable shit is the 17 TOs. Jerebko losing the ball right by his own basket by throwing a lazy pass after getting possession, guys not catching the ball, it was hard to watch. You lose to bad teams on the road by not making open jump shots, playing no defense, and turning the ball over. Last night we got all three of those things. Four players with at least 3 TOs is something that cannot happen under any circumstances, and really isn’t who the Celtics are, which is again where the frustration comes from. The Celtics lost by 16 points, and gave up 17 points off turnovers.

– Layups guys, layups shouldn’t be this hard but for some reason they continue to be the hardest shot in basketball for our beloved Celtics. This will never make sense to me,

– Terry Rozier is probably going to want to forget this game. A guy that has seen his play improve in Avery’s absence had a brutal night.

– Speaking of Avery, now hearing he’ll be out until the All Star Break makes me feel like we are delaying the inevitable. Just give me the Woj bomb already and leave me to cry alone in my room already.

The good news is they are right back at it again tonight in POR for a little revenge. Remember the last time they played in Boston and the NBA straight up admitted they blew a call on a Smart steal that would have basically won the game? People forget, I do not. POR is in a weird stretch currently, playing better but losing some close games in OT, and they did just beat the Jazz on Tuesday, so they are rested. I don’t think I’m alone in thinking it will be nice to get this game out of our heads with a win tonight. Stop the bleeding before it becomes something serious, and correct the ship for the rest of this trip and finish strong. That should be the goal. Now, say it with me 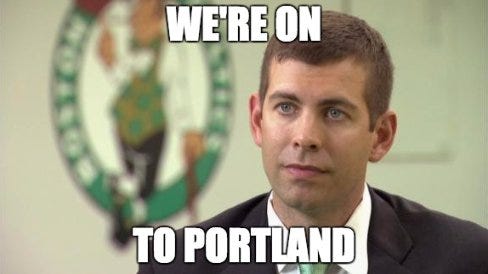