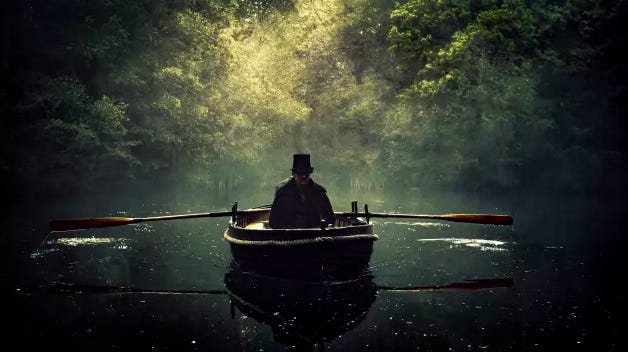 While it might not have had the shock and awe of last episode, the exciting cat and mouse politics of Episode 3, the Tom Hardy acting tour de force of Episode 2 or the “holy shit this is so different and cool” factor of Episode 1, last night’s Taboo episode was the best one of the season so far. The pace of the episode was fine without too many of the dragged out circular dialogue scenes that have been the show’s biggest weakness in the first half. It wasn’t too over-the-top and used the shocking moments sparingly, making them more effective. Every plot advancement was clear and much-needed. It set up further action (the French Experiment), answered questions (who’s the boy Delaney entrusted in that man?) and presented new ones (how do the Americans everything?). By any measure, it was a fine episode of television.

The show opening up with the duel was to be expected, as was neither man being killed by the end of it. Delaney, always two steps ahead, used the duel as a power play rather than an opportunity for petty vengeance. By letting Thorne Geary shoot and correctly guessing the chamber was empty (might want to check the pistol that next time you’re about to enter a life-and-death battle Thorney, pro tip) he just let the worst brother-in-law of all-time that he isn’t even worth killing for Delaney and that he is expendable to die by the people he considers his friends. He now knows his place. Add in the fact his wife says Delaney’s name in her sleep, I’d say it’s borderline impossible to dominate someone’s existence more than our guy James does to this poor sap. Thorne has to be careful though if he expects to take out more of his frustrations on his wife and keep slapping her around the way he does whenever things go poorly, or he’s going to be murdered by a different Delaney than he probably expects.

The next big object of plot in this show that I think will be hugely significant is the trunk full of James’s father’s belongings. Of course it was going to be important given that it was mentioned about 85 times since the departed Delaney’s wife showed up on the scenes, and screenwriters who repeatedly mention something don’t do it for fun, they’re trying to signal something. But that was made even more explicit by Brace the servant’s great fear of what can lay inside that trunk. Right now all we have out of it is a treaty that could have legal signifigance to the claim to Nookta. But I promise we aren’t done with it. There’s more in there. And it’s going to make Delaney very, very angry when he finds it. And when men like Delaney get very, very angry, people tend to die in very, very painful ways.

But of all the things from this episode I’m excited for, the clear leader in the clubhouse is the mystery of the sunken slave ship. What happened on the coast of Africa is the key to a lot of the biggest mysteries in the show. It’ll give us our biggest insight yet into Delaney’s psyche, which would give clarity to his visions. It will tell us about his experience in Africa, which will clue us to the source of his supernatural abilities. It will explain his revenge motive against the East India, which will help us unravel the biggest mystery of the show which is what is it this guy ultimately wants out of all of this. We have only scratched the surface of what happened on that ship. Once we get into it, I expect us to find something pretty damn horrific. But it’ll be equally, if not more so, fascinating as well.

I’m on Twitter @CharlieWisco if you want to shoot the shit about the show.