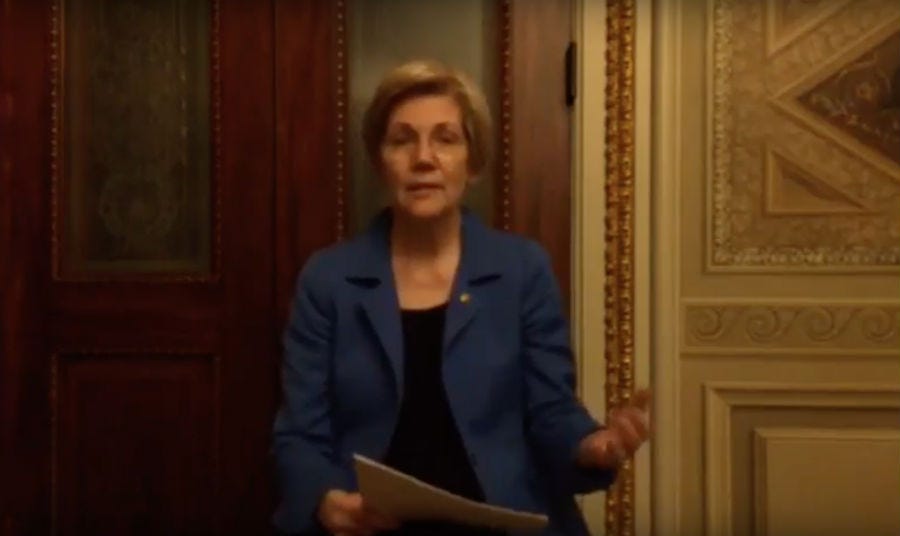 So quick little back story here — Senator Jeff Sessions is up for Attorney General. He is, you guessed it, controversial; so much so in fact that, when he was nominated for a federal judgeship in 1986, he was denied. Opponents of his nomination cited a racisty past.

Fast-forward 31 years and opponents to Sessions’ nomination are citing the same things, and they’re fighting hard to deny his confirmation as Attorney General. Senator Elizabeth Warren has been a leader of that opposition, and last night she spoke out and read a Coretta Scott King (Dr. King’s widow) letter, written in 1986, critical of Sessions’ then-nomination.

Or planned to speak out and read the letter, I should say, before she was blatantly silenced by Republicans.

They invoked some rare rule and forced her to essentially shut up and sit down. She then read the letter outside the Senate in some dark, sketchy corner.

I want to say a couple things and I’ll start with this. If you believe someone is a racist, then you definitely should fight for that person NOT to be the top attorney for the country. You should fight hard. Democrats believe that and are fighting, as they should. I have no problem with that.

On some accounts, Jeff Sessions is qualified to be Attorney General. However, on the racisty account, there’s suspicious evidence he falls short.

Having said that, I can’t support Warren’s decision to read the letter OUTSIDE the Senate. A terrible look. You’re saying, “hey they owned me in the Senate and shut me the hell up so here I am in this dark corner reading a letter.” It’s like not getting invited to the party so you show up and take a 6-pack to the face on the porch. Terrible look. Either read that shit in front of the Senate for all the world (Senators) to see or don’t read it at all, but definitely don’t read it in some dark ass setting outside the Senate.

I hope corrupt Hillary Clinton chooses goofy Elizabeth Warren as her running mate. I will defeat them both.

Let’s properly check goofy Elizabeth Warren’s records to see if she is Native American. I say she’s a fraud!

Goofy Elizabeth Warren, Hillary Clinton’s flunky, has a career that is totally based on a lie. She is not Native American.