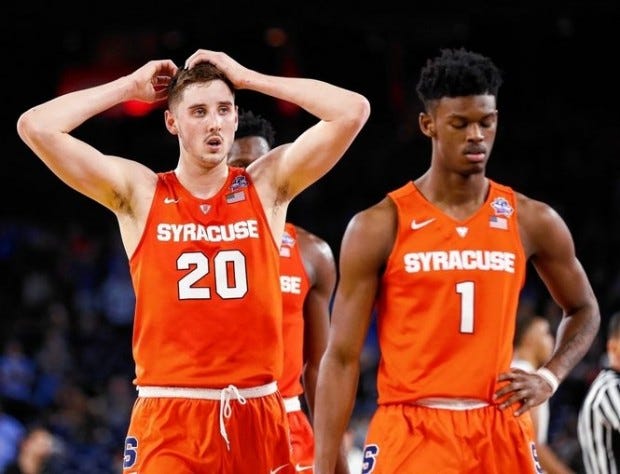 We’re less than four weeks away from Selection Sunday. We get our first peak at some of the teams that will be safely in the NCAA Tournament when CBS does the bracket reveal for the top-4 seeds in each region on Saturday. It’s hard to imagine one of those 16 teams dropping all the way out barring an unforeseen circumstance. What we do have however, is a bunch of teams fighting to get into the NCAA Tournament.

One of those teams is the Syracuse Orange – once thought of as the most disappointing team in college basketball this year. The Orange entered the season with high expectations – especially by someone who writes on this blog *cough, cough, Hubbs, force in the ACC, cough*. They were a consensus top-25 team and most people had them around 17-22 depending where you looked. They were part of a group that made up the second tier of a loaded ACC. The bubble seemed to be laughable as the season got under way.

But then the Orange were left for dead. Losses to St. John’s (by 33 at the Dome), Georgetown, Boston College and UConn all happened. They were 8-5 as they entered ACC play and even after the loss to Virginia Tech to put them at 10-7, 2-2 in ACC, the Orange were projected to miss the NIT.

They now sit on a five-game winning streak and it’s been nothing short of the #CardiacCuse you’ve been seeing on Twitter. It started with a come from behind win at home against Wake Forest, which really saved their season. They were down 55-49 with 10 minutes to go, before outscoring Wake 32-21 for the last quarter of the game. They then turned around and beat the shit out of a top-10 team in Florida State before the miracle against North Carolina State. They followed that up with an even bigger miracle when Virginia collapsed in the second half and ultimately got the win last night on a three at the buzzer. Sometimes you need a little bit of luck in college basketball.

Before we get into what changed the season around, I do want to take a second and look at the game winner from last night. First, it was a shit show from the get go. Clemson’s Brad Brownell tried to call timeout with no timeouts remaining after Clemson took the lead with a little under six seconds to go. After that Boeheim drew up a great play by getting Lydon the ball to drive, causing Clemson’s defense to collapse because of his ability to finish. He found the open Tyus Battle who drilled a wide open three. However, Lydon got away with a ‘charge’ and I put it in quotations because this shouldn’t be a thing.

By rule this should have been called. Clemon’s defender was set, Lydon never stopped and ran into him well after the pass, with space to stop. First, it’s dumb by Lydon not to jump stop here. Take away even the remote possibility of a charge being called. Second, don’t say ‘you can’t call a charge in this situation of the game.’ It doesn’t matter if it’s 10 seconds into the game or 10 seconds left in the game, a charge is a charge, a foul is a foul. If it’s a foul in the first half, it’s a foul there. Lastly, this is all why I want to get rid of the charge (not an offensive foul, just the charge). As an NBA office guy has said, the goal should be to make a play on the ball and not get rewarded for falling over. So while Clemson’s defender did the right thing as the rule is currently laid out, he should have kept his hands up and looked to deflect the pass or tie up Lydon. Again though, all the credit to Lydon for not forcing the shot here and making the extra pass

So what has changed for Syracuse over the last couple of weeks? First, it’s been the rotation. DaJuan Coleman is completely out of the rotation while Frank Howard is playing under 10 minutes a game. Boehiem has rolled out a 6-man rotation and has given his best players – Lydon, White, Gillon and Battle – the ability to play the entire game. Playing that zone in theory helps keep them out of foul trouble as they rank 41st for the least amount of fouls. More importantly it allows that zone to be better (more length and athleticism in the back) while offensively there are more weapons and Syracuse can spread you out to kill you from behind the arc. Sure, it helps when Gillon channels his inner Steph Curry like the NC State game, but it’s still the fact the floor is spread.

The Orange have turned into a spot up shooting team this season, running it 24% of the time on offense, 9% higher than any other offensive set, which is transition. The good news is Syracuse ranks in the 99th percentile in the country, scoring 1.164 points per possession out of the spot up set. That questionable news is they are starting to rely on the three more, shooting it now on 40% of field goal attempts. Again, the 3-point line all depends on how you look at it. It’s a complete game changer when you’re shooting well like we saw them do against NC State or it can shoot you right out of a game.

Take a look at this set against Clemson. First, as the drive happens look at how open the lane is for Gillon. He has the ability to pull up and shoot a 12-footer, kick to Howard or potentially throw the lob. If that’s not there he does have Lydon as the trail. This is what happens when Coleman isn’t in the game.

Finally here’s the play as a whole. It’s an awesome design to keep the lane open, something we’re seeing Cuse use more of. This is allowing Gillon and White to get open looks and truly make up for not having your traditional point guard.

So what does Cuse have to do going forward to get on the right side of the bubble? They currently sit as the eighth team out in Lunardi’s latest Bracketology (released before the Clemson game). It’s tough looking at Syracuse’s resume, because you see 8 ACC wins and think they’d be safe. Well, the problem (for lack of a better word) is they are taking advantage of the schedule in the ACC. Yes, they have those wins over Florida State and Virginia, but they’ve only beaten two other tournament teams and they are currently on the bubble as well in Wake Forest and Miami.

If I’m a Syracuse fan I do want to see guys like Lydon become more consistent down the stretch here too. Taking a look at the top-6 guys and their splits vs ‘Tier-A’ teams compared to everyone else, Lydon has one of the biggest drop offs. With his ORtg down 10 points and his TO% up 6% in those top games. He also shoots six percent worse from behind the arc. He’s too good of a player to not show up in these games.

I think they need to go 3-3 down the stretch, with one of the wins being over Louisville or Duke for Syracuse to be on the right side of the bubble. If they go 2-4 or go 3-3 by sweeping Georgia Tech and Pitt, they’ll still need to win at least one game in the ACC Tournament. So while the conference record looks nice, Syracuse needed to have more than Louisville twice. The schedule broke perfectly for them if they had a strong nonconference. However, the lack of the nonconference wins means not getting Florida State, UNC, Duke, Virginia and Notre Dame twice hurts the strength of the wins.

The fact they are even on the bubble at this point says a lot about Syracuse though and the credit has to go to the coaching staff to switch up the rotation and just play the best players.