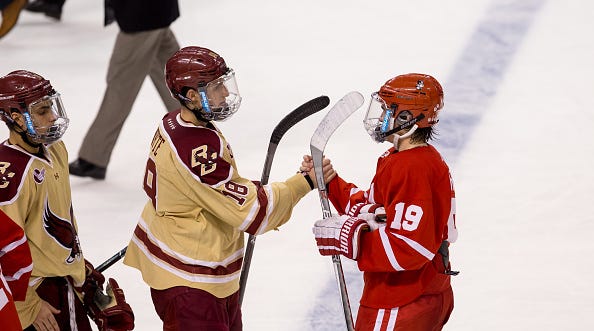 The city of Boston has a ton of things that I should be jealous about. It’s championship after championship after champion in that town. Fuckin’ McGillicudy has seen more championships before he hits puberty than I’ll see in my life time. But the emotion I feel there is resentment toward the city, not jealousy. What I am jealous of, however, is The Beanpot. Year in and year out, this tournament comes around and I’m so jealous that there’s nothing here in Philly like it. Sure, there’s the Philadelphia Big 5 for college basketball but it just doesn’t have the same effect.

So anyway, the Beanpot kicked off last night with Harvard taking on Northeastern and then BU vs BC as the main event. Let’s get into the highlights and have ourselves a time. Starting with

Just a real weird and fluky bounce here for Harvard’s 1st goal of the game. But that’s what happens when you play a bunch of Ivy League nerds. They’re able to track down the trajectory of the puck and know the perfect angle to deflect it at to make sure it takes the best bounce as possible. And if former Harvard hockey phenom Barstool Riggs is any indication, they’re all able to keep one eye on the puck and one eye on the net at the same type. Wonky-eyed freaks. Fucking nerds, man.

Northeastern then tied it up on the powerplay getting a few bounces of their own.

Shoutout to that Lady Gaga ticker across the bottom of the screen. Love you, NESN.

Not entirely sure if that was meant to be a feed to the backside. Looks like Aston-Reese was trying to put that one on net and caught a bounce off a stick. But it worked out perfectly. Catch the goalie jumping from post-to-post, stuff it down his throat on the backdoor. Fuckin beauty.

Then Harvard decided to go for a run real quick. It started with a powerplay goal of their own. Then came the grittiest goal of the night. And this right here is going to look like a wet dream to any coach who has ever screamed at his team to “play until you hear a whistle”.

Just keep chipping away in front of the net. Shoutout to the zebra there for keeping himself in position to where he had eyes on the puck the whole time and held off on blowing the play dead. Because as you’ll see, this eventually happened in the midst of that entire cluster fuck.

Almost the play of the game right there by Garrett Cockerill to keep the puck out of the back of the net. But it just crosses the goalline and we have a good hockey goal. 3-1 Hahvahd.

Then it was Luke Esposito with the dagger for the Crimson.

Still not as bad of a blunder as Matt O’Connor a few years ago. But man, sometimes college goalies in Boston just look like they’re allergic to to puck or something. Northeastern was able to chip away and make it a 4-3 game but that’s as close as it would get and now Harvard has BU in the championship next Monday. How did BU get there, you ask? 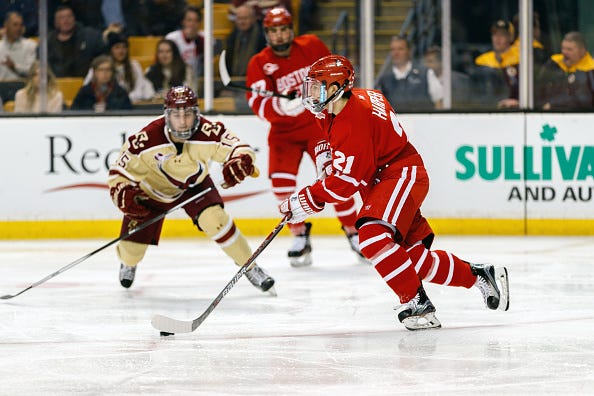 First off, shoutout to this jersey matchup here. Those BC Frozen Fenway jerseys are rockets. And BU looking extra crisp as always. But enough about the fashion show on the ice. Let’s get to the goals. Well actually, let’s start with this hit stick because we could use a little adrenaline rush in the morning.

Hopefully he didn’t have any homework he had to finish up after the game last night. There’s a good chance Bobo Carpenter wouldn’t even be able to get his name right after that one.

Any who, Bruins prospect Jakob Forsbacka Karlsson got the scoring going for BU after crashing the net on this Patrick Harper wraparound.

Harper was one of about 50 BU Terriers on the USA World Juniors team this year and he went to stuff it on Joseph Woll who you’ll also remember from that tournament. Woll gets post-to-post on him, makes a great stop on the wraparound but then it’s JFK from the grassy knoll to put that one away. 1-0 Terrier.

Then Blackhawks prospect Chad Krys gave the Terriers some insurance with this goal on the powerplay.

Remember Bobo Carpenter who we were just talking about? Well this goal is all him. Watch the way he drags the BC penalty kill after getting that pass from Dante Fabbro (Team Canada).

Now obviously you would never show this clip on a “How To Penalty Kill” tutorial video. Not a ton of discipline there by the BC killers. But Carpenter drags them all to one side of the ice, creates all the space in the world for Krys and then he buries it. It’s beautiful.

BC was able to get themselves on the board with this goal from Austin Cangelosi off a ridiculous assist from Matthew Gaudreau.

The Gaudreau boys are preposterous. It makes a grand total of zero sense how Matty Hockey was able to get a stick on this puck. No sense whatsoever. Yet he manages to get off a perfect pass to Cangelosi cutting through the slot and the lead is cut in half. That is, of course, until the Terriers were able to break out a full World Juniors line on the penalty kill and put this one away with a Clayton Keller shorthanded breakaway.

BU out there killing penalties with Clayton Keller, Charlie McAvoy and Jordan Greenway. Are you serious? That’s just not fair. Put them up on a 5-on-3 and they still find a way to win that shift.

Great feed from McAvoy. Keller has proven time and again that he’s too good to not be in the NHL the very minute his season at BU ends. It’s just men against boys right there. BU wins 3-1. Harvard next Monday. Thanks for coming out.