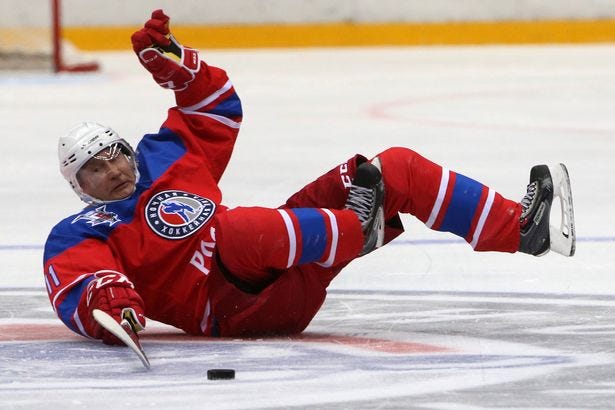 Philly.com – The Flyers alumni will play three games in Russia as part of an upcoming goodwill tour, and one of the opposing teams may feature…..Russia President Vladimir Putin?

Former Flyers defenseman Joe Watson, who will play in the games, confirmed to the Courier-Post that Putin “wants to play against us,” but that his schedule won’t be released until 24 hours prior to the game because of security reasons.

Something about this feels like a trap to me. And by “something”, I mean “everything”. The Philadelphia Flyers alumni team has had a busy schedule so far this year commemorating the team’s 50th anniversary. They had their alumni game against the Pittsburgh Penguins alumni team at the Wells Fargo Center last month. Pretty sure the two teams are playing again closer to the Stadium Series later this month. And then the team is heading off to a 3-game tour in Mother Russia. Typically, this wouldn’t be reason enough for concern on its own. But then you couple in the fact that Vladimir Putin wants to play and now we have a serious issue on our hands.

Everybody remembers when the Broad Street Bullies put the Soviet Red Army in their back pocket. Here’s a quick little reminder for any of you kids at home who may not know what I’m talking about.

The Flyers bullied the SHIT out of the Soviets. They bullied them to the point where they just quit and left the ice. What a bunch of pussies. Many historians point to this game as the moment that the Soviet Union lost the Cold War. It was humiliating. They got bitched around like little children by the Bullies. And obviously now that the Flyers alumni are heading to Russia, many of whom were on that ’76 team, the Russians are looking for retribution. Hence why Vladimir Putin is so insistent on playing.

Now here’s the thing. Any time Vladimir Putin plays in a hockey game, it’s customary in Russian tradition for the other team to treat him as if he were a Make A Wish kid and let him score 8-9 goals a game. If you want to survive without getting assassinated by Putin’s army before the 3rd period, you just let Putin skate all over you and score at will. They’ve got no heart when it comes to standing up to a supreme leader, but the Flyers are a different breed. They’re not just going to sit there and let Putin have his way. They’re not going to go easy on the guy just because he doesn’t really know how to skate. They’re going to go balls to the walls. They’re gonna try to do to Putin what they did to the Red Army in ’76. And that’s what scares me the most. Because they’re entering a lose-lose scenario here.

If you go in there and take it light against Putin, then he hangs that over the Flyers’ heads for centuries to come. All that will be talked about is how Putin avenged the ’76 Red Army team and put up 7 goals against the Broad Street Bullies. But if the Flyers go out and play a legitimate game against him? And maybe take an extra shot or two on him in the corners? Well then they all end up getting shot before they leave the rink by the Gulag. So yeah, pardon me for thinking this is a terrible idea when there is literally no possible outcome here that works out in the Flyers’ advantage.

I can already tell it’s going to be a Danny Briere fist pump that really sends Putin over the edge. Holy fuck he’s going to be pissed when Briere rips out his soul.