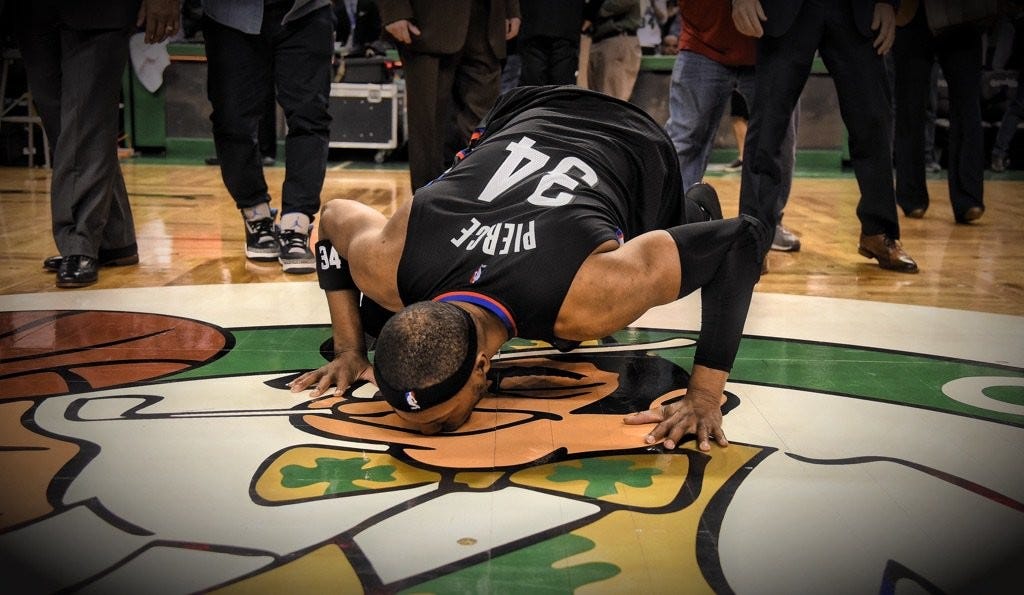 Yesterday was one of, if not the best day of Boston sports in the history of our beloved city. There will be so much Super Bowl coverage today, I want to make sure people don’t forget what set the stage for such an incredible day. Much like the rest of you, I’d been avoiding February 5th on the Celtics schedule all season. Personally I was not ready to say goodbye to Paul Pierce, even though he hasn’t been on the team in years. I just wasn’t. My emotions were a wreck for weeks leading up to it, and they only got worse as tipoff got closer.

Then the intros started, and the tears couldn’t be held in any longer

More on this in a minute. On the basketball side, another big time win against a good team (despite missing CP3 and currently being in a 2-6 skid). Don’t look now but the Celtics are obtaining those quality wins we all desperately called for. Now seven in a row, they are keeping pace with the red hot Wizards, and are starting to slowly but surely increase their lead in the 2 seed, now just 2 games back of CLE. At 33-18 this team still hasn’t even really been together healthy yet which is the main reason for my excitement. After a slow start, and some inconsistent play at times, the Celtics find themselves right where we thought they’d be, and they are showing no signs of slowing down.

– Normally, you know the rules. You know what we would be starting with but there are certain things you make exceptions for, and Paul Pierce saying his final goodbye to the city of Boston is one of those things.

I’m not crying, you’re crying…..again. And really, the crowd at the Garden yesterday was fantastic. Paul Pierce chants so clear you could hear it on TV, and we never ever stopped.

I won’t sit here and say that Boston fans are the only ones that care about their legendary players, but there is no denying given the history of this franchise, that this was a different level of special. I’ve long said Pierce was my generation’s Bird, and I think yesterday reflected that sentiment. We’re all just truly thankful for the incredible journey Paul took us on, and I’m proud to say I got to see a true Celtics legend.

But the story of this game wasn’t the win, it wasn’t Isaiah’s 28, it was Pierce’s last shot. Doc Rivers after hearing it for basically the entire second half, finally put Pierce in the game and gave us all the moment we so desperately wanted.

If you don’t think Red worked his magic on that shot, you are a moron plain and simple. In fact, it reminded me of another Pierce shot that Red clearly had his fingerprints all over.

A moment like that set the stage for what was to come later in the day, but honestly the way things unfolded, with a Celts win combined with a great Pierce moment, it almost felt too good to be true.

– You know how I know Isaiah Thomas is for real? He can shoot like absolute shit, really no even play that well, and still throw up a 28/8 with just 3 turnovers. He only had 10 points in the fourth quarter, so really this was one of his more quiet outings, but when the team needed Isaiah he did what Pierce did so many times before him and came through. He started this game off with a bang in the first quarter (13 points in 10 minutes) and made it very clear from the get go that Austin Rivers had no shot against him.

I know the story with Isaiah is usually about his scoring, but his passing seriously continues to be equally impressive. What helps is Isaiah remains so calm despite the chaos that can happen in the paint, and the more we see him play, the more we see him understand what the right basketball play is, and then execute it. This play to Amir is a great example

The way he drew DeAndre Jordan out goes to show how much respect teams give him, and his good decision making to not force a shot, but instead set up his teammate for an easy basket is what gets my blood pumping.

We should have known after Isaiah did his thing what was to come in the SB, just a couple fourth quarter killas nbd

– “Something something Al Hoford can’t play well against good teams, especially in the fourth quarter”…..hmmm.

I don’t know about you, but I saw a guy throw up a 13/16/6/2/2, and easily outplay DeAndre Jordan, who happens to be one of the best centers in the entire NBA. I could handle seeing him shoot the ball a little better, but he’s averaging over 8 rebounds and over 6 assists so far in February after having a pretty solid January, so I think it’s now a little silly to still be complaining about how much money he makes. Al Horford makes your team better. Period.

– Another opportunity for Jaylen meant another opportunity for my heart to grow even fonder. Poor JJ Redick got bodied left and right from the rookie, and we’re seeing an edge to Jaylen that wasn’t there to start the year. Other than Isaiah, he led all other Celtics starters in FTA, and we really got the full spectrum from Jaylen. We saw him get out in transition off turnovers and attack the rim, we saw him hit a three, and then in the fourth quarter when the game was “tight” we saw him make a big boy move

– This was the most alive (13/6) we’re seen Amir Johnson in weeks. I dunno if the afternoon game gave him some extra energy, but very, very strong showing for a guy who clearly is having foot problems.

– Brad had a semi short rotation in this game, and thankfully both Olynyk and Smart responded. Both had 13 points, both shot over 50% and both hit threes (3 for Marcus). I like seeing the 10 FGA from Olynyk in just 22 minutes, that tells me he wasn’t thinking and didn’t play with any hesitation. Remember that’s the good Olynyk. For Smart, it was more of the same. Guy comes in and makes his impact on winning. The way he moved the ball, the way he defended, his big three at the end, we’re in the middle of a good stretch from Smart and I don’t hate it one bit.

– Second quarters continue to be a pain in my goddamn dick hole.  The second unit for whatever reason can’t stop having problems in this 12 minutes. I think this is really where the Celts miss Avery, because often times Brad will leave him in with this group in the second, and it really helps the offense. Well yesterday, it was the Clippers second unit that couldn’t be stopped and I didn’t love how guys like Jae and Horford had to play over seven minutes. That’s what happens when you NEED to rest Isaiah, but your team has no offense and you’re at risk of losing your lead.

– They only had 11 turnovers which is nice, but they should have had about half as many if they would you know, not throw lazy passes. I understand turnovers happen, but stupid turnovers don’t have to happen.

– How about when the Celtics have all the momentum in the world, the crowd is juiced up and ready to explode, and fucking Amir Johnson decides it was a great time to shoot a three. Obviously he missed it. Then it happened again during an 8-0 run, the Celtics take a timeout. Ok Brad is really good at ATO’s so I was excited to see what they would run. It resulted in another Amir three. Guess what, that missed too.

The worst thing that can happen to this team is Amir hitting his first corner three. This is the downside of the NBA in 2017.

– I’m only a little annoyed by the 52 threes, because like Brad said a lot of them were open looks. The problem with that strategy is if you subtract Isaiah’s 12 FTA, the Celtics as a team only took eight. There were times where even though they were open looks I would have preferred guys like Jae and Kelly to take it to the rim, but I accepted long ago that this is simply how the Celtics prefer to play. Taking that many can often come back to bite you, fortunately that wasn’t the case.

– I was ready to get VERY mad online if Doc didn’t put Pierce back into this game. I’m glad things worked out, but this would have been one of the more dense Doc Rivers decisions of all time had that last subsitutions not happened.

– Looking back, kind of rude of all of us to ignore the fact that Pierce wasn’t the only former Celtic making his return to the Garden. My bad Brandon Bass, that’s on me.

The Celtics now embark on a brutal West Coast trip with dates in POR/SAC/UTAH/DAL before a quick home stop vs PHI and then another road trip. I’m already exhausted just thinking about the late night blogging.

The days of the home heavy schedule are over, and the Celts are going to see how legit they are over the next few weeks. In the meantime we not only celebrate a win, but also one of the best days for Celtics fans in recent memory. Say it with me…