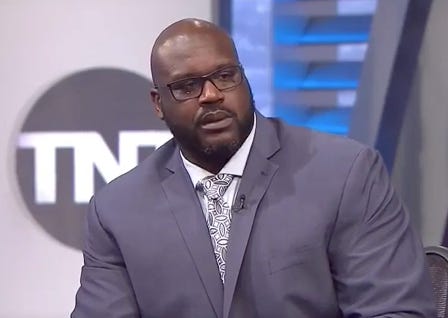 “The fuck you just say to me?”

That right there is why Charles Barkley is Charles Barkley. For better or worse, he will always tell the truth like George Washington while being quicker with the tongue than Manny from Scarface.

Everything Charles has said the whole time is true. LeBron is being a bitch about not having an absolute STACKED team and Shaq is an awful fighter. And thank God he is. Because if Shaq was a good fighter, can you imagine the amount of bodies he would have stacked up by now? Omar, John McClane and Michael Myers wouldn’t have shit on The Diesel. But Charles has known Shaq was a bad fighter even back in their playing days. Look at the level of disrespect by the Chuck Wagon when he throws the ball at Shaq’s noggin.

No way Barkley pulls that stunt with the ball unless he knows Shaq stinks at fighting. Barkley was giving up like 8 inches and in a rare occurrence, actually giving up weight to Shaq in that fight. But if you know that your opponent throws hands like Bad Haircut Seth throws footballs, you should have nothing to worry about.

However I realize Barkley responded to LeBron and Shaq but never said anything about Charles Oakley’s tweet.

Probably for the best though, to be honest. We all know what happens when the two Charleses of the NBA on NBC Era go head to head.

P.S. If Sir Charles actually listens to “Hate Me Now” every morning, he has officially gone loony toons. You can’t be in your 50s and listening to that everyday. Something’s gotta give.

P.P.S. Is there another sport on the planet with the positive trajectory of the NBA right now? Young stars everywhere, teams being sold for billions, labor peace, and run by a commissioner that isn’t a complete lying piece of shit. And if all that isn’t enough, this feud dropped right into the league’s lap. The NBA and Barstool are on a race against one another to see who will #OwnTheMoon first.