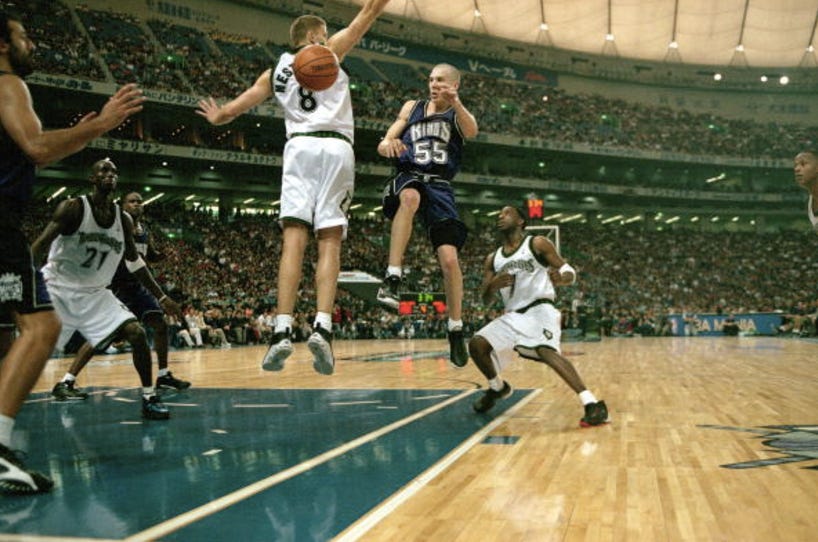 Inside The NBA and Area 21 continue to do the damn thing. Best basketball show on television and it’s not even close. Well, last night was a chance to see a true icon to every late 90’s white basketball player on the planet with Jason Williams making an appearance. Who didn’t try the elbow pass while playing pickup basketball with your friends? The nickname White Chocolate? Absolutely perfect. For me his time in SAC will always be how I remember him even though he was probably better in Memphis. From 1998-2001 though, dude was must watch stuff. He came into the league with some sort of blend between Pistol Pete, And1, and a flare as a PG that would go on to influence the position forever.

Also not to mention, he was part of what I would say will go down as one of the most iconic basketball commercials of all time. I’m talking right up there with the Bird and MJ McDonald’s commercial. Remember this?

White hot fire. I remember getting the VHS of this when I bought my new pair of Nikes. It 100% is still in my old bedroom at my parents house I guarantee it. Man the early 2000s were something.

As for the show last night, it was filled with tons of great stuff

11-14 year old me is freaking out. You know how they say players play with eyes in the back of their head, well Jason Williams was the very definition of that. What a talent, it’s a shame what the NBA did to that 2001 Sacramento team. Just awful.

Thankfully, there’s the internet where we can spend hours falling down a YouTube hole looking back at what a beast he truly was.