Kmarko had a great breakdown of the anarchy going on at UC-Berkley’s outrageous riots and protests over a Milo Yiannopoulos event and it’s all horrifying stuff. This Milo guy has been received similarly at campuses around the country, as Kmarko said the guy is unquestionably a troll and an asshole. But college is supposed to be about enlightenment, learning new viewpoints, understanding things besides your own world views. They should see this as a chance to learn and get out of their comfort zone and instead they’re lashing out violently. Berkeley is a top 25 school and even kids there don’t grasp that they’re there to learn things, even if they’re uncomfortable, and that other people have a right to hear them and maybe even agree with them if they so choose. That’s how the whole country fucking works.

But nothing sums up the tone deafness of the protests going on across the country right now than this video. You have someone who comes off as an atypical Trump supporter, a white girl who just wanted to show face and even gives props to the protesters who have reeked havoc on the campus, not there to argue but maybe do something to help put a human face to the people they’re angrily rallying against. And on the other side you have this dude dressed like Scorpion from Mortal Kombat menacingly eyeing her down the whole time: 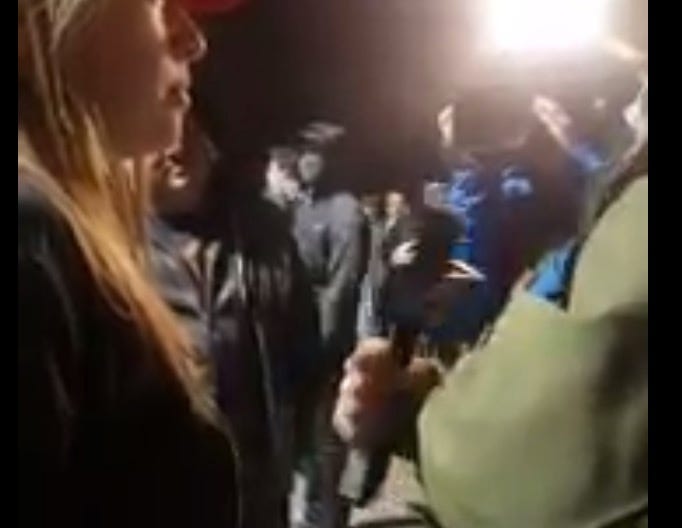 And of course the shithead BLASTING her with a firehose worth of pepper spray just for being there. I mean how does this help ANYTHING? This girl was practically on their side even if she didn’t agree with their message. But now do you think she or others who see this are going to be as receptive to hearing another side out when they know that even if they put everything aside and try to actually hear a protester out they might get attacked regardless? And this shit just keeps on happening all over, Trump supporters getting fucked with because they’re somehow less than human for believing different things.

It’s all so shameful, protesters around the country need to figure out that even if you disagree with someone they’re not necessarily an enemy combatant. Next time look to your Pac 12 neighbors at USC for some guidance on handling things with class, Cal-Berkeley.