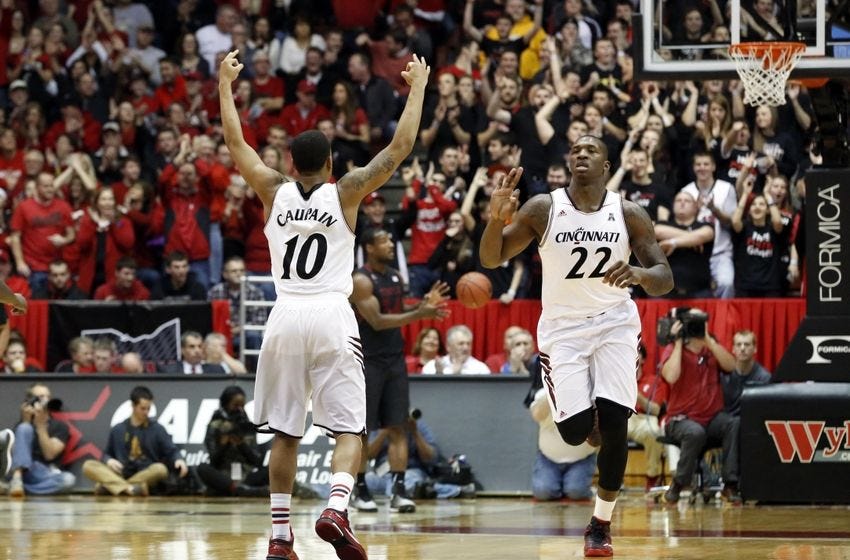 Today we’re looking at Cincinnati – who is almost an identical twin of Maryland, a team we looked at earlier this week. Both teams are made up a combo of freshmen contributing now and have a core for the future and an elder statesman. On top of that, they are winning close games, both teams will have a ton of wins, yet their seed won’t look reflective of that to the casual fan.

When you look at Cincinnati the first thing you see is that 20-2 record, 9-0 in the AAC and on a current 3-game winning streak, including a come from behind win last night at Tulsa. Again, similar to Maryland, that’s something to applaud. You are beating the teams on your schedule. You’re finding ways to win, as Cincinnati keeps finding itself on the right side of close games. However, they only have 5 top-100 wins and currently just 2 (Xavier and SMU, both at home) wins against teams that look locked for NCAA Tournament berths to go with a win at Iowa State (a bubble team).

So if the season holds serve as it looks like it will – with Cincinnati losing 1 AAC regular season game at most, what exactly happens to them come NCAA Tournament time? First, there will be expectations. It’s the first time in a long time that Bearcats feel like they should advance to the second weekend of the NCAA Tournament. They haven’t been ranked better than a No. 6 seed since the 2004 NCAA Tournament, when the Bearcats were a No. 4 seed and lost in the second round to Illinois. Second, Cincinnati fans shouldn’t be upset when they aren’t a No. 2 seed, even with an undefeated conference regular season. This is where strength of schedule will come into play and with the American being extremely weak this season and a below average nonconference, it feels like Cincinnati is maxing out as  No. 4 seed.

That’s perfectly fine. This is a team that had moderate expectations heading into the season. One who many thought would make the NCAA Tournament, but be another No. 8/9 seed and not run away with the American. So how is this happening?

First, this isn’t your normal Mick Cronin coached team. Cronin (who I thought may have been better off getting out of Cincinnati this offseason when he flirted with UNLV) has always been a coach respected for his defense and toughness. Cronin’s teams swarm you defensively, win games in the 50s. This year the Bearcats rank 46th in AdjO, which is the highest any Mick Cronin coached team has ranked – including his years at Murray State. Per Synergy they grade out as excellent on offense scoring .973 points per possession, but they are really killing you in transition, where they rank in the 93rd percentile in the country with 1.175 ppp.

This is where the a guy like Jarron Cumberland is starting to come into play. Cumberland is a freshman, who is 6’5” 218 lbs and the absolute future of this program. He’s a guy that can finish, but what’s unique about him is how much he prefers the left wing to the right wing in these transition situations. Cincinnati wants to run this year as Cumberland has 47 possessions in transition himself. However, he needs to get to the left wing, which is a wrinkle teams need to start paying attention to. He’s scoring almost a full point per possession on a similar amount of possessions when he gets to the left wing vs the right wing.

What makes Cumberland dangerous in transition, is he can shoot the ball well from deep. Defenders have to be careful when the ball is in Troy Caupain’s hands and Cincinnati is in transition. Cumberland is big enough to drive on most guards and likes to finish with contact. But, he’ll also get to that left wing and spot up to shoot. Here are examples of both:

Along with Cumberland, the other member of the core of the future is Jacob Evans, a sophomore who just found himself as one of the 10 finalists for the Jerry West Award as best SG in the country. He’s been Cincinnati’s best offensive player this season, scoring 1.088 points per possession, which is the highest on the team.

Evans wants to beat you with spot up shooting. If you’ve seen Cincinnati play this season, you know he wants to shoot (and thinks he can make) any 3, especially late in games. That’s not a bad thing, especially when you’re a sophomore. Every good team needs that player with the mindset that he can take over a game. What makes Evans special though is he can shoot – and shoots even better – when he’s guarded. He’s had 70 catch and shoot situations this year and 47 of them have been guarded. He’s scoring 1.277 ppp during those situations.

What does make Evans dangerous shooting is the fact he has a quick release. He knows when he’s spotting up, he’s already set. There’s no wasted motion with him, which again, as a sophomore is a huge thing to have in your arsenal. With good size (he’s 6’6”) he doesn’t have a problem elevating to shoot over people.

I’d like to see Evans get better with the ball in his hands as he should be able to create his own shot a little better, especially next year when he won’t have Caupain there to drive and kick. He grades out as either poor or average in ISO and pick-and-roll sets. That has to change for Evans to make an even bigger jump next season. The one thing he will benefit from, even without Caupain, is Kyle Washington and Gary Clark in the post. Both are offensively talented enough that defenses have to decide whether they will double (you should, just not off Evans) or let their bigs play 1v1 in the post. If the double/rotation happens, Evans will benefit from spotting up there.

This team does pass the ball well. Whether it’s feeding the post, kicking out or the drive and kick, they rank 57th in the country in assists per field goals. A lot of that has to do with Caupain – who is the senior leader and guy that is starting to become the go-to guy when they need a big shot late (as evident in the Xavier and Tulsa games). They aren’t going to turn the ball over on offense and luckily they don’t fall in love the 3-point line, which depending how much into analytics you are could be a negative.

Defensively they are going to get after you still. Cronin does a good job of switching up man and zone defenses to keep you guessing and has the length this year to protect the rim – ranking sixth in block percentage. They are the best team in the country at defending inside the arc, giving up just 39% from 2-pointers.

So to answer my question in the headline. How good is this team? They are firmly in that tier 2/3 category. I don’t love their schedule this year and they have lost to the two best teams they played – Butler and a healthy URI team. But, with the offense being something relevant this season, there’s absolutely 0 reason not to think of this team as a Sweet 16 team. Again, there’s nothing wrong with that – as I’ll always stress making the Final Four is incredibly tough. The NCAA Tournament is based all on matchups and even if you’re a No. 1 seed you can get screwed with a bad early matchup. Cincinnati does have a little bit smaller of a window than Maryland – but UC fans should be excited for the next two seasons.