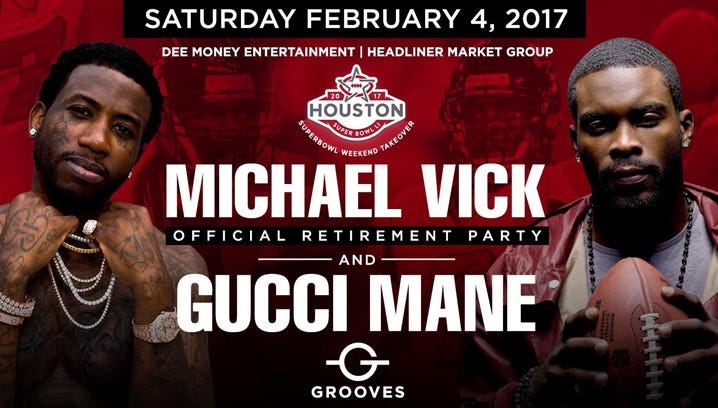 TMZ – It’s officially over for Mike Vick … and the NFL star is going out with a massive party.
The 36-year-old quarterback is set to host his “official retirement party” at Grooves of Houston nightclub during Super Bowl weekend, a rep for Headliner Market Group tells TMZ Sports.
Vick will cohost the party with Gucci Mane.

And that’s all she wrote. The best video game QB this side of Randall Cunningham in Techmo Bowl is heading into the sunset on his own terms and not court ordered by a judge. Wait, he wasn’t retired already? Oh, well. I guess throwing your own banger with Gucci Mane is an excuse to make anything official. There’s even rumblings of the great Ron Mexico coming out of retirement to unleash his patent strain of HPV at the party. Some birds aren’t meant to be caged, their feathers are just too bright.

Seriously though, I obviously can’t defend his cruel and heinous actions, but Vick’s time in Philly showed he is at the very least genuinely remorseful for what he did. The man would constantly go out of his way to speak to troubled youths and others venturing down the dog fighting rabbit hole to hell. It seems like Vick was caught up in the system and how he grew up rather than being a complete dickbag filled of scum. Regardless of his past, one thing’s for damn sure: On the field he was the definition of electric. Easily one of the most athletic physical specimens to ever play the game. His 6 TD performance vs. Washington in 2010 is how legends are made. Sure, a freaking playoff win or 4 would’ve been cute that year, but I digress. RIP to one of the most fun players in NFL history .