This is the time of year where people get a little stir crazy with hockey. It’s the dog days. The Blackhawks almost always look flat this time of year, people start to panic, and trade rumors start swirling. I, like basically every other fan, LOVE rumors. They’re entertaining and something to talk about. I’m NOT in the business of starting rumors. Not because I don’t want to be. I’d love to start rumors, but nobody in NHL Hockey Ops will talk to me so I don’t have sources. Having no sources makes it difficult since I don’t want to just make shit up like some people. With that said, I can give you my ananlysis of the names being floated out there right now because they are preposterous. 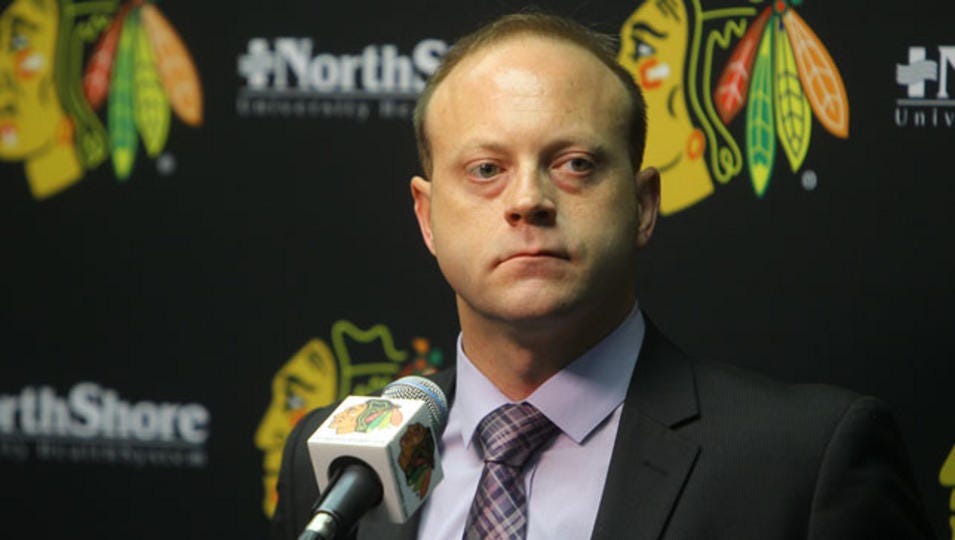 Now, before we get started on these rumors it should be said that Stan Bowman has downplayed the notion of a splashy trade at the deadline. The Blackhawks have limited Cap Space, a cap next year that is projected to remain flat, and also lack the organizational depth after making deadline deals in previous years to chase a Cup. Stan has also said that with the NHL Draft being in Chicago next summer, the Blackhawks want to retain their first round pick in order to make it a more fan friendly experience. Hey Stan…

If this whole thing about not wanting to trade a first round pick so the fans can stand and cheer for some pimple face teenager is actually true, please walk down the hall, gently knock on John McDonough’s door, and then tell him politely to FUCK. OFF. Nobody cares about that draft pick. NOBODY. If you want to restock the shelves after not have a 1st round pick for the last two years, I can accept that. I don’t agree with it, but at least that’s logical. Don’t hold on to a 27-30th overall pick in a week draft for us, the fans, when we’d much rather you make a trade that helps this team win a Cup.

One final caveat for this blog…many Blackhawks related rumors come from one particular person with a source. I have a pretty good source that says that guy’s source is complete bullshit. That being said, rumor talk gets clicks. I’m in the business of clicks. Lets start dancing with some of these big top 6 forward names.

This idea is the most preposterous one out there so it’s a good place to start. No doubt, Duchene is a BIG time talent. He would fit perfectly flying up the left side of Toews and Q would be able to roll out an extremely balanced lineup because everyone would be slotted nice. But…uhhh…how can the Hawks afford to add a guy making $6M per season? They can’t. No chance Colorado agrees to eat cap dollars so the Blackhawks would have to send back a key roster roster player. The name that gets thrown out is always Seabrook. I understand the argument for moving Seabrook, and maybe that’s something they should explore in the summer, but you don’t make your team better in the short term by trading Seabrook now. The Blackhawks have had their struggles on the back end this year, and Seabrook is apart of that, but he’s still one of the best 4 dmen on the team and a huge presence in the locker room. What’s the point in plugging one hole and creating another? I can’t see this happening before the deadline. This was a pipe dream at best in my opinion

Iginla has always played on the right side. RW is the one spot where the Hawks are pretty set with Kane, Hossa, Panik, and Hartman. Hartman and Panik could shift over to the left side, but is it even worth giving up an asset for Iginla at this point? I say no. He’s not particularly quick or productive anymore. Great leader and an expiring deal, but I don’t think he solves any of the Hawks issues. He’d be just another body.

JVR’s name always pops up in trade rumors and I don’t really understand why. He’s been a productive top 6 LW pretty much his entire career and his contract is definitely pallatable for most teams. For whatever reason the vibe is that JVR isn’t apart of Toronto’s long term plans. The problem is that now Toronto is very much in the playoff hunt and JVR is one of their leading scorers. I think it’ll be hard to justify trading one of their most productive players for a rebuild when they’re on the cusp of the playoffs. I do think Toronto could be talked into eating some cap because they don’t have any issues with the Cap for the duration of JVR’s deal and they’re focused on the long term. IF Toronto falls apart in Feb, JVR would be a great fit for the Hawks. Probably my top choice, all things considered, for a deadline deal.

Thomas Vanek is a DOG. He’s a bum. I hate Thomas Vanek. I don’t care how talented he is and how great his contract is, you can’t trust him. There’s a reason why Vanek is on his 5th team in 6 seasons and will likely be traded to someone at the deadline. I don’t want him. I’d rather retain assets and role with who they have currently on the roster.

Detroit is dead. There was a time when it looked like Tatar was going to be a key piece that kept the Wings in the playoffs beyond the Zetterberg-Datsyuk era. Now…not. The Wings need a rebuild. Tomas Tatar isn’t a pure rental thanks to his RFA status. The Blackhawks would have to give the Wings more than they would get in RFA compensation. If the Wings are ready to move on from a guy in his prime, with control of his rights, and only 2 years away from being a 29 goal scorer, then I would welcome Tatar with open arms. He probably gets traded before the draft similar to Andrew Shaw if the Hawks can up his value with a deep playoff run.

Similar story to Tatar. Looked like a budding star in Detroit with back to back years with over 25 goals. Last year he dropped to 17 goals. And this year he’s down to 7. His term and cap hit make him more difficult for the Blackhawks to acquire. I would say Gustav gets traded somewhere, but not Chicago.

Our old friend, Patrick Sharp. It’s been an awful year for Dallas and for Sharp personally. He’s dealt with concussion issues all year and has only played in 26 games. Dallas is only 3 points out of a wild card spot, but realistically they aren’t going anywhere. The Stars are dead last on the PK and 28th in goals against. Even if they decided they were buyers, traded for Ben Bishop, and snuck into the playoffs they still wouldn’t be a real contender. So the sooner the Stars realize they stink, the sooner Patrick Sharp becomes available. Over the past few weeks several people in hockey media have speculated about a Blackhawks reuion with Patrick Sharp. I don’t think Sharp has played his last game in Chicago. Whether it happens before the deadline or over the summer on a Brian Campbell-esque deal I don’t know. Sharp can still skate and I think he can still produce. He’s a natural LW who would transition smoothly into the Blackhawks system…obviously. He’d be a great fit if Dallas tanks and they’re willing to eat some of his salary.

Similar to the Richard Panik for Jeremy Morin deal last year. I started trying to think of names that maybe fit the Hawks speed, skill needs who might just need a change of scenery.

That’s the list for now. I might do a blog about Dmen help because the Hawks need that as well. Keith played almost 30 mins against a terrible Coyotes team last night. That’s playoff minutes, not early Feb against a piss poor team. Clearly Campbell and Kempny haven’t worked out. They need another body back there, but it’s slim pickings.

I don’t know if the Hawks will make a trade. Sometimes it’s better to just stand pat and the rentals last year certainly didn’t work out. I am sure Stan would love to have the Danault-Weise trade back if he could. The team would be a lot stronger and legitimately might not have needed a rental if they were able to slot Danault in somewhere. The window for the Hawks is closing for the Hawks to win a 4th Cup and the West is wide open. To me, strike when the iron is hot and figure out the future…in the future.