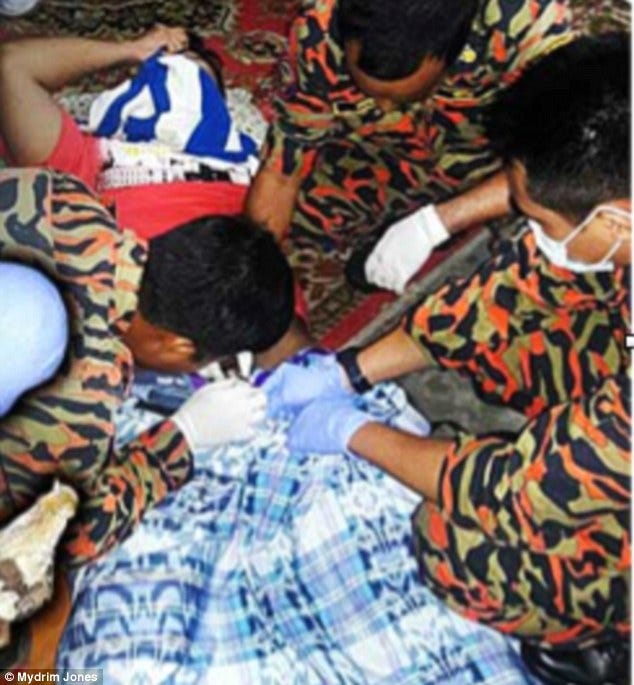 Daily Mail- A 21-year-old man in Malaysia had to be rescued by firemen after he accidentally got his penis trapped in a water bottle. According to reports, he decided to use the water bottle to relieve himself because he couldn’t make it to the bathroom in time. However when he tried to remove his penis, it became lodged in the bottle. Taking matters into his own hands, the man then tried to use a metal saw to cut himself free but ended up injuring his penis and causing it to bleed.

We’ve all been there. You’re on a long bus or car ride, the driver won’t stop, so you piss in a bottle. But this is what separates the pissers from the pissants: every guy in America knows that you only piss in a Gatorade bottle. The mouth is cavernous. You could stuff the rim with silly putty and make love to it. The fact that this guy managed to stuff his unit into a regular water bottle doesn’t do much to erode the stereotype that Asian men have small dicks. Silver lining is at least he got stuck? Like that has to be a badge of honor over there. Oh look, there goes big swinging bottle dick over here, just sticking his dick in places he knows he can’t get out of. Hide your wife.

At the same time, I’m not sure I agree with his exit strategy…

“Oh no. My dick is stuck in this water bottle. What should I use? Ah, perfect, a rusty saw. I would have preferred a blender, but this will do.”