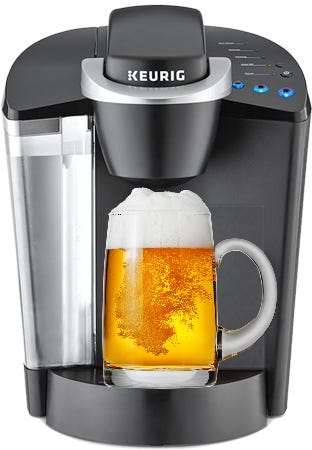 CNN- Keurig and Anheuser-Busch InBev (BUD) are teaming up to build an in-home booze brewer. The companies said Friday that they’re launching a joint venture. The plan is to create an appliance that can churn out “beer, spirits, cocktails and mixers” at home, according to a press release.

The companies are still researching the product, so there isn’t even a prototype yet, much less any other details. But an Anheuser-Busch partnership may mean that it can create home-brewed versions of beers such as Budweiser and Corona. Keurig is best known for its single-cup coffee maker. But the new appliance will use the technology from its now-defunct cold beverage maker, the Keurig Kold, which was supposed to compete with SodaStream.

Now this is what scientists should be putting modern technology towards. People are already living long enough lives and the iPhone is good for at least a few more years. Lets focus on making it easy to get fucked up in the comfort of your own home.

The reason I love Keurig is I feel like it can’t fuck up a cup of coffee. I have an old school coffee maker and a Keurig and anytime I use the old coffee maker, it’s just a litttttle bit off. Maybe it’s because I’m not like Jimmy from Pulp Fiction and I buy the cheap shit. Maybe it’s because I just don’t know how to make a good cup of coffee. Or the most likely reason is nothing tastes as good when you make it yourself, whether it’s coffee, pancakes, burgers, or anything in between. Nothing you make yourself tastes as good as something made by someone else or a robot. That’s just simple science. And I imagine that goes double for mixed drinks. My drinks are always strong as an ox or as weak as Glass Joe, which is why a good bartender is worth my weight in gold. Plus who wants to buy the ingredients that are actually required to make good drinks? They don’t go unless you are hosting parties or a raging alcoholic. But if you have just enough in a tiny cup to make whatever awesome mixed drink you like, then it’s a home run. Plus think of all the new drinks you can try. I just go with vodka club whenever I go out because it’s simple and not full of sugar. But that drink can get old fast. Now there is no limit to what you can drink or try thanks to this wonderful machine. You can probably even get one of those variety packs from Amazon and try a couple of tutti fruitti drinks and just pass it off as “it came with the rest of the variety pack” even though everyone loves those drinks. Did Keurig do it again or did Keurig do it again?

And of course I’d love to brew my own beer, mostly so I can tell people I brew my own beer and so I can come up with witty names for the beer. The only thing stopping me from doing that is patience and skill. But now with the Keurig, I can just stick a cup in a machine, press a button, and feel like the greatest brewmaster on Earth. The dude with the beard in the Sam Adams commercial won’t have shit on me. The future is upon us people. It is time to embrace it with open arms.