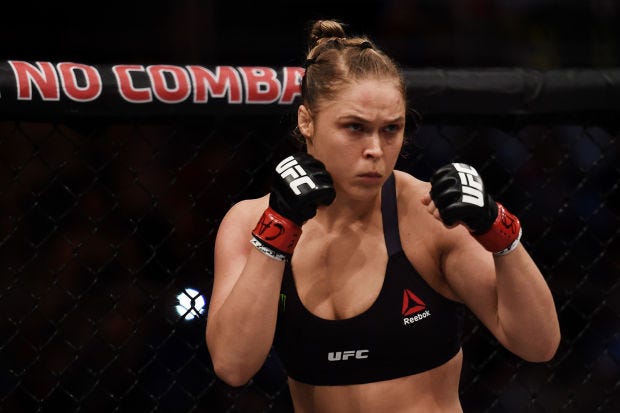 [Editor’s Note: This is from our Stoolie, Bennett, who is a UFC aficionado and reported before on Philly’s Alverez. He would like it to be known he’s not an affliction/tapout/cargo shorts with strings UFC hardo. “Just so we’re clear. I got to work for them through an internship and started to watch the sport differently. I don’t know as much as the die hards who’ve watched since it was blood sport-esque tournament style. But I stay up on current shit and do my research.” Cool story, brah. But for real, we got ourselves a decent write up about tonight’s matches here. Take it to the bank.]

Why am I even writing this? What is a horseshoe? Are there any horse socks? Is anybody listening to me?

That’s how I feel about tonight’s PPV. Friday night before NYE and you have to spend $60 to wait until midnight for Ronda Rousey? Yes, it’s the return of the biggest (recent) hardo in the UFC, but other than that, casual fans don’t want to see the lead up. We got guys missing weight, fighters not doing press, and a Mike Pyle mullet running circles around Mike Gundy. Shit is a mess. With Cain Velasquez off the card- for seemingly his own doing- what’s the draw? Well I’m not too sure, because I don’t think Ronda sells the whole thing. However, on the off chance that you happen to be at a bar that paid the thousand+ dollars it takes to show a fight, here’s some things you may want to- but probably still won’t- watch for.

This is the definition of a Fox Sports matchup. One old name, against one… other guy. Love this fight for one reason. Mike Pyle. Sure he’s old as balls, but he’s seasoned. Been around the block, company guy- Mike Pyle. He’ll eat some shots, and look to go to the ground. If Pyle’s chin can hold out, maybe he gets Garcia to follow him to the mat. He’s got slick jiu jitsu and in the later half of the fight, after Garcia gets fatigued, maybe he slips a triangle in. Garcia is 3-2 in the UFC and one of his losses is to the under card-main event fighter Neil Magny. Enough said.

Has anyone been better at not doing their job than Johny Hendricks? A true fat guy through and through. He lives in Texas, drives a monster truck, owns a string of failed steak houses… Whatever, he gets paid to make weight, and he hasn’t done it 3 times now in just over a year. A former champion should never go out like this—losing 3 of his last four, and coming in a full 2.5 pounds over the limit. When he was good, he was… good. A close St. Pierre split decision, a win over Robbie Lawler (subsequently a loss to Robbie Lawler), and there you go- you’ve had a good run. It looks like this failed weight cut just beat him.

Neil Magny on the other hand comes out earlier this week with the Rudy-esque – sleep while Hendricks parties- story and looks like a saint. He’ll get 20% of Hendricks purse because of the missed weight. You really have to pull for a guy like this who seems to be doing all the right things. Vicious standup? Not really. Awesome ground game? Ehhh still no. Just a good fighter. He’ll probably point-out this win in a decision unless Hendricks totally crumbles and gets KO’d.
Magny -125

Dong Hyun Kim v. Tarec Saffiedine
This fight is one of two that takes the place of Cain being on the card. Not getting into the other fill-in because Ray Borg missed weight, and it’s a flyweight (125 lbs. are boring). Stun Gun Kim is a bigger welterweight, and could benefit from using his dirty boxing. His only recent loss, out of his past seven outings, is to the now WW champ, Tyron Woodley. You have to hope for a Stun Gun win, and a post fight interview resembling Blue Jays pitcher Kawasaki (not racist, he really got on the mic and said “MY NAME AH STUN GUN”).
Tarec Saffiedine is kind of boring. He was the man in Strikeforce, but I’d say probably not worth the price of a ppv. With a 2-2 record in the UFC, maybe he tries to capitalize on Kim’s recklessness and finish the fight as opposed to waiting on a decision. Great kicks, tremendous kicks, just not exciting.
Stun Gun ftw and ft-post fight interview -140

Dillashaw v. Lineker
You could probably put this fight and the co-main next to each other and get similar results. Two technical strikers vs. two bomb droppers. In this fight I think the technical striking of Dillashaw outmatches Lineker. Not to take anything away from Lineker, his fists are like cement blocks (hence the nickname Hands of Stone), but TJ is a cut above. Him and “Bang” Ludwig (his trainer) are scientific with their combos and footwork and ring movement, whereas Lineker is a head down and swing for the fences type fighter. To his credit, Lineker’s style has paid off. A win here and he’s got the next title fight.
These lower weight fights (bantam is 135 lbs) typically don’t draw a crowd, that being said, TJ’s title fight against Barao and Lineker’s fight against McDonald saw awesome knockdowns/outs. I don’t think Lineker gets knocked out, but I doubt he’s able to catch TJ.
Dillashaw -250.

The shit talking has been a lesser version of Mcgregor and Diaz. It kind of gives you second hand embarrassment to watch. But as cringe-worthy as the shit talking is, these two fighters are exciting. Dom is the seasoned veteran who legitimately bought his house through beating all of Cody’s teammates at “Team Alphamale” (hardoooooos). He’s even more technical than TJ, if that’s possible, and puts guys in fits trying to figure him out. He’s in and out quick when picking his spots. I don’t think his knees are an issue anymore, and he’s truly at the peak of his career.

Cody is bomb dropping young pup who I THINK is just a fight or two ahead of schedule. He got this shot because of the streak of knockouts he’s had, and the brass wants him to be the next Conor. But hasn’t faced anyone of this caliber. This is will be his 6th UFC fight, with his last 3 fights ending in first round KO’s. Cody’s backed up his talking in the past, but will he be able to catch Cruz? I hope, otherwise those neck tats and chest piece are a bad look on a loser. Not to mention his girlfriend has a twin. Advantage Cody. As good as he is, I think Cruz will get caught with a one timer and make for a nice highlight and possible rematch.
Garbrandt +185

OHHHHH SHE’S BACK! I’ll admit, I was on Ronda when she first announced her comeback. Why not? Holly Holm was her kryptonite, not this new champ. Lets hype up a rematch, and right the ship, am I right? Wrong. Ronda went totally dark after her loss, like suicidal dark, hasn’t done any press, and puts on a tough guy/hardo persona whenever she’s in front of the camera. Give me a break. McGregor lost, admitted he needed work, and fought the same guy at the same weight his next fight and won. That’s a champion.

Even still, everyone loves a comeback story. That being said, the UFC and new WME/IMG ownership looks to be handling her with kid gloves. You were the biggest star in the sport, you took an L, and now you want to die? Lame. The question is, who’s in Ronda’s head more? Ronda, or Amanda Nunes. I’m betting Ronda. Who knows if anything has changed since her last fight stylistically, I’m guessing not much. Maybe don’t get kicked in the face so much? She’s still out in Glendale training and is probably just as dangerous. Her biggest issue will be her state of mind.

On the flip side, Amanda Nunes is someone we can get behind. A great “come from nothing” story, who pleases the PC crowd by being the first openly gay fighter, and wore a goddamn LION MASK AT HER WEIGH IN! I love it. Unfortunately, I think the brass dropped the ball in not promoting her as much as Rousey. This was the perfect opportunity to appeal to a larger demo. Openly gay with her a girlfriend who trains her/corners her. CHECK! Nahhhh let’s promote a Ronda comeback… but she’s not going to give an interview. Smart.
Whatever, they don’t call Nunes the lion for nothing. Hopefully she doesn’t run into Ronda’s judo and ground game, because that power is undeniable. But on the feet, her hands are insane, although she’s ended a few fights by submission. The beating she put on Miesha Tate to take the belt was disturbing, granted Tate was contemplating retirement (still sour about it). I’m all in Nunes her mainly because Ronda’s a headcase/hardo/sore loser, and if you don’t think that plays a factor in this fight, you’re…. probably a casual fan. As one era ends, another begins. LFG Nunes.