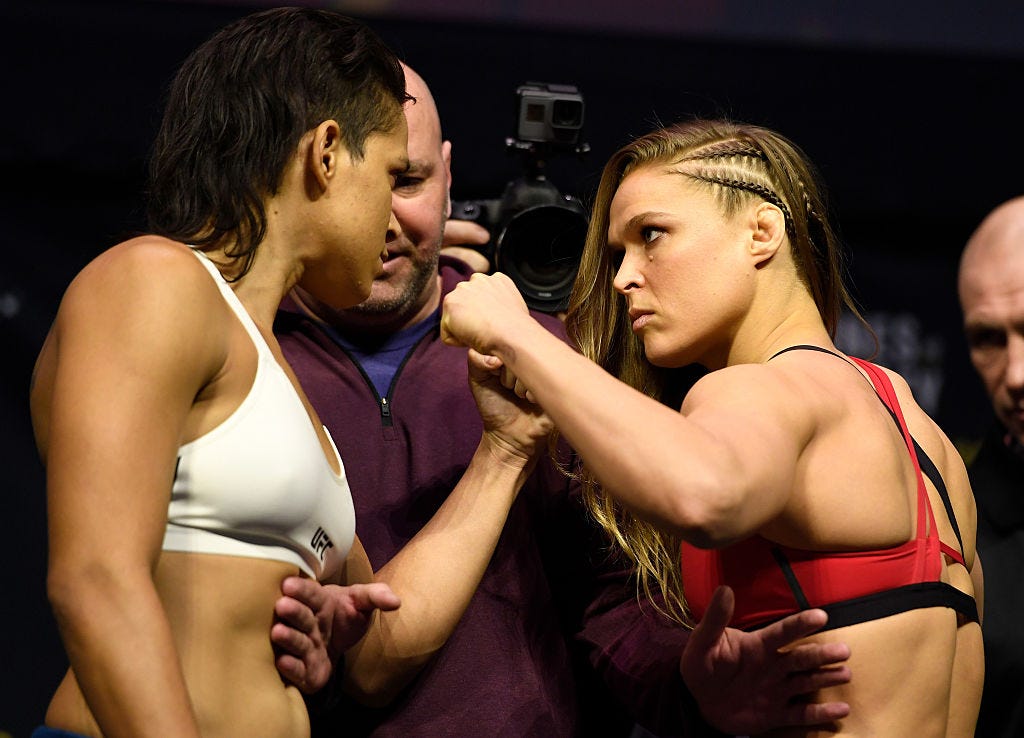 **Riggsy Note: Here writes Robbie Fox. Robbie loves wrestling and fighting and shit and apparently strings words together about it. Great news I think. We’ve seen how well he handles Twitter so going to be real interesting to see how he handles the comment section. God save us all.

UFC 207 is tonight, and it’s a hell of a card. Barstool’s never really had an MMA guy to cover these events, so who better than known MMA fighter Robbie Fox? 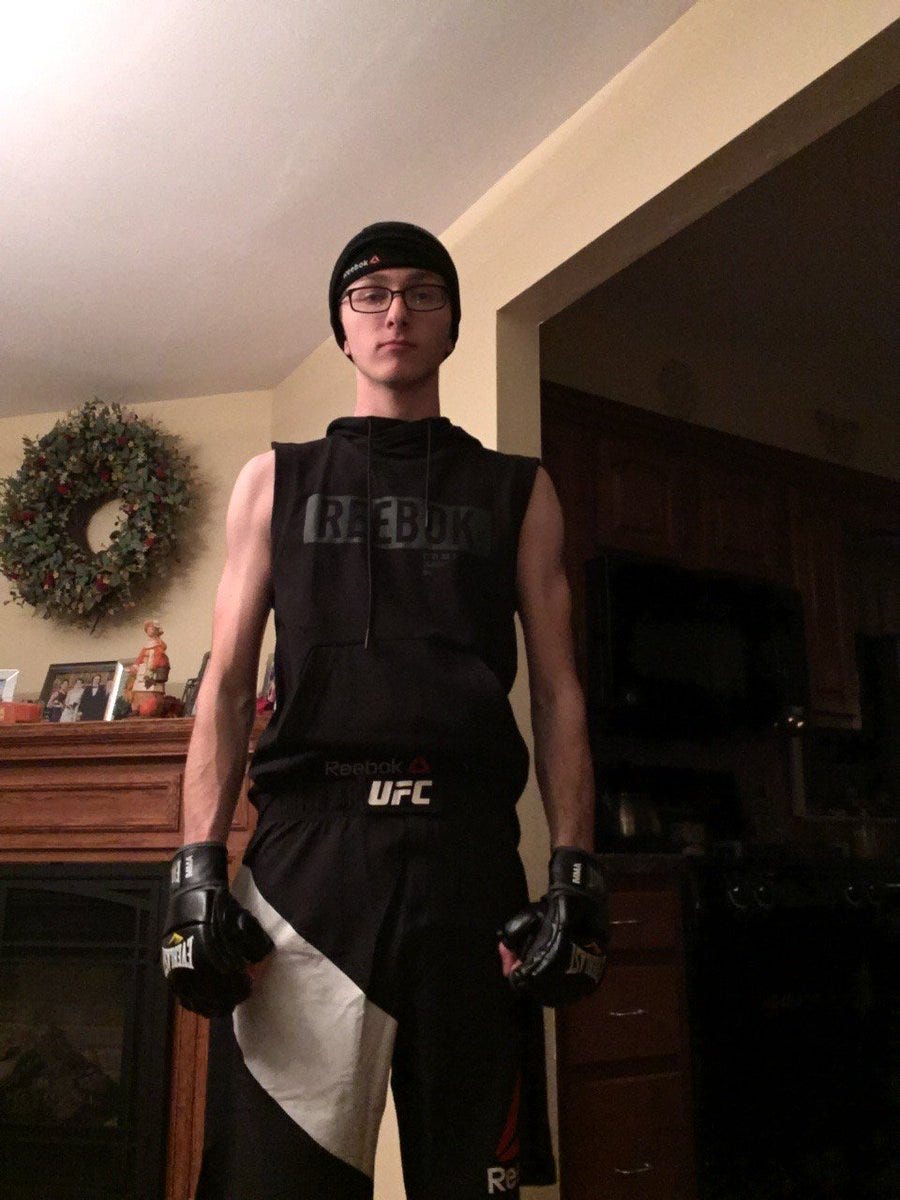 If you’re not going to that hard motherfucker for your barbaric human cockfighting coverage, you’re doing it wrong. I’m gonna go a little in depth for the main event, co-main event, and co-co-main event of the card, and just give some quick picks for the rest of the card. It’s my first blog on here, so I’ll save you a novel.

This is the big one. 411 days after getting her head knocked into the 10th row by Holly Holm, Ronda Rousey is going to step back into the octagon. The title has switched hands multiple times since Rousey went dark and left the sport, with no woman able to successfully make a defense, and I believe that stat will continue tonight. Ronda Rousey is back, fighting with something to prove, which is frightening.

She’s in the best shape of her life physically. Mentally, eh, well I don’t know where she’s at. Mostly because in an unprecedented move, Rousey’s excluded herself entirely from media week. All we’ve seen from her was a 30 second appearance at the weigh ins, and her quick stare down at the ceremonial weigh ins, where she stared a fucking hole through Nunes and her dumb lion mask.

HERE WE GO. @RondaRousey and @Amanda_Leoa have an intense staredown at #UFC207 weigh-ins. https://t.co/YggrGHvqjg

It’s a really tough fight to call. Ronda Rousey, as long as she’s not a shell of her former self, is still an armbar machine. Holly Holm finding the holes in her game doesn’t change that. Enough time hasn’t passed since the Holm fight for Rousey to suddenly become a world class boxer, but as long as her approach is calm here, she won’t need to be. After all, she never really needed to be in her first 12 fights. I believe she needs to make Amanda come to her, engage in the clinch, and obviously finish with a judo throw and an armbar. If she’s impatient and decides to rush in, that’s where trouble can hit her, and hit her hard. That trouble’s name is Amanda Nunes, and she’s the hardest hitting 135lb-er in the UFC. As far as Nunes’ keys to victory-well, do exactly what Holly Holm did. Stay the fuck away from the clinch using jabs to your advantage, crack Ronda early to stun her, and kill shot her.

Dominick Cruz vs Team Alpha Male has to go down as one of MMA’s best rivalries this year. After a two year layoff due to injury, Cruz returned to the octagon in January and defeated TJ Dillashaw (former member of TAM) to win back the title he never lost. Following that, in June, “The Dominator” absolutely embarrassed Urijah Faber (leader of TAM) in his first defense back. Now, just before the new year, Cody “No Love” Garbrandt, protégé of the now retired Urijah Faber, will challenge for the championship as Team Alpha Male’s last hope.

In the lead up to this fight, Dominick Cruz bought twelve billion dollars of real estate in Garbrandt’s head. Check out these videos if you have a few minutes. It’s the smartest man in the sport talking to another typical MMA hardo who’s best comebacks are “Say it to my face” (which he has) or “I’m gonna knock you the fuck out” (which we’ll see about).

I’m not going to deny the knockout power of Cody Garbrandt, because that’d be silly to do. If Cody connects with Cruz, he does have the ability to do what no man has ever done, and knock Dom out. I’m just not sure he can actually connect. Cruz’s ability to duck and weave combos is like no other in the UFC. You could watch highlights of fighters swinging and missing against him for hours. One second he’s there, the next he’s not. TJ Dillashaw’s style is very reminiscent of Dom’s, and the closest anyone has ever come to replicating it, but we saw earlier this year nobody does it like the champ. Expect an emotional Garbrandt coming into this fight, rushing in, looking for a knockout early, and expect Cruz to know exactly how to deal with that. As I said earlier, Dominick Cruz is the smartest fighter in the company. His fight IQ is off the charts. I’m predicting he’ll fight calm and fight fast, dragging Cody into the deep waters of the championship rounds and tiring him out before picking up the win.

This fight should serve as a number one contender’s match for the Bantamweight title, and boy do I love this matchup. TJ Dillashaw is looking to earn the rematch he has been bitching and moaning about for a year straight, and John “Fucking” Lineker is looking to light up some fireworks. I used to be a huge Dillashaw guy. His performance against Renan Barao at UFC 173 remains one of the best performances I’ve ever seen in the octagon, and he was a pretty good defending champion for a while. After he left Team Alpha Male to train with that assmunch Duane Ludwig though, he’s spiraling down into another whiney, entitled, brat. He lost the title to Dominick Cruz in a SUPER close fight. It wound up being a split decision not in his favor, and he hasn’t shut the fuck up about how the system was rigged and he won the fight and needs a rematch. Hey Teej, you lost the fight before it even started.

John Lineker’s pulling off the upset here. That’s that. Dillashaw didn’t impress me at UFC 200, and Lineker has done nothing but impress me in his last 6 fights. He finds Dillashaw’s chin and says, “Night night!”, setting up a massive fight between himself and Dominick Cruz, where I’ll have to pick between two of my favorite bantamweights.

Quick picks for the rest of the card: