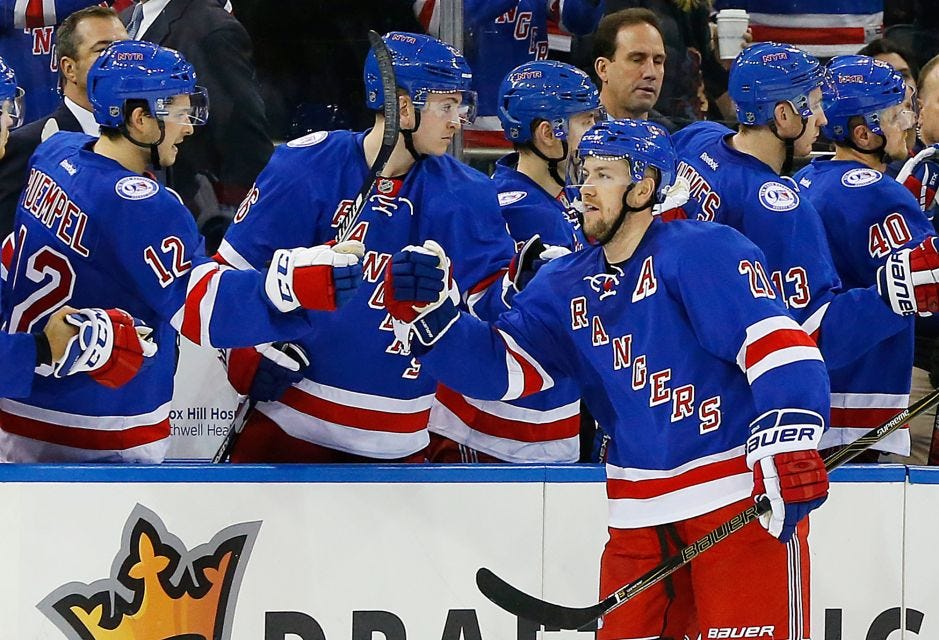 Over the first month or so of the season, the Rangers offense was arguably the deepest most versatile group in the league. Helped lead them to their 13-4 start. We all knew regression was coming though and it’s hit this team hard. Take a look at all the slumps this squad is carrying:

That’s a lot of dead weight (4 even-strength goals combined!!) for a team to carry at once – especially with Zibanejad & Buchnevich out for well over a month each. Combine their absences with Rick Nash being sidelined for most of December & the Blueshirts have been skating without half of their top 6 lately. Still, despite injuries, depth struggles, defensive ineptitude & Lundqvist scaring the shit out of an entire fanbase the Rangers have kept pace in the hottest division there is.

Last night started out as a nightmare. AV’s squad looked lethargic, Raanta was beaten on Ottawa’s first two shots & NY went into the first intermission down 3-1. One thing has stood out as an immense positive though during their December struggles. Most of the guys expected to be leaders on this team have been doing exactly that – and no one’s been better than Derek Stepan. He simply wasn’t going to let his team lose & you could see it in his effort. After chewing out his bench he buried a pair that evened the score before Nick Holden took the lead for good.

Stepan’s line has been responsible for a lion’s share of the Rangers scoring this month when they’ve absolutely needed it. He (5G/9A), Kreider (7G/5A) & Zucc (1G/10A) have stepped up with the help of McDonagh (1/8 in last 9) & Holden (3/3 – gonna miss him in Vegas) on the back end to keep their team afloat throughout one of the busier schedules in the league. Step often gets knocked as not being a true “1A” center – but you’d be hard pressed to name a Blueshirt who rises to the occasion more than he does.

Henrik Lundqvist could certainly be in that conversation over his stellar NYR career. This season wouldn’t be included though. Since Zibanejad went down against Florida, the Rangers have lost 7 games. In 4 of those, it was Hank’s poor play that was the storyline. Pulled vs Pittsburgh, beaten from outside the zone in 1-goal loss to Buffalo, benched for a stretch after losing to the Isles & pulled again vs the Wild. Meanwhile, if Raanta’s not winning he’s losing 2-0, 2-1 or still making 40 saves during another Penguins onslaught. After an ugly first period last night, Raanta made 30 of 31 saves to keep NY in striking distance – none better than this one:

Another outstanding effort from the Rangers backup that’ll have AV thinking hard about whether or not Lundqvist’s flu will carry into tomorrow night @ Arizona. No, we’re not at the “goalie controversy” stage – not yet. December is Hank’s regularly scheduled shitty month. But if he continues to struggle finding consistency once the calendar turns, it’ll become harder & harder to ignore the fact that there’s another netminder who ranks in the top-10 in both GAA & save percentage ready to take on a bigger load.

Closing in on the halfway mark, it’s hard to complain about the Blueshirts overall. Only the defending champs & a squad that’s reeled off 13 straight wins sit ahead of them in the entire league. There’s still obvious issues on the blue line – Klein has been bad & while Girardi has been better than last year, his years of being a top-pair guy are still over. AV doesn’t have much choice though. Can’t move Skjei up with McD & put those two together. No reason to break up the Holden/Staal duo either. So until a trade is made, this is what they’ve got.

Help is coming though up front. Nash should be back any game now. Buch skated in a non-contact jersey & Zib has shed his boot. With a couple of 5-day breaks in January (scheduled “bye” & the all-star break), the Rangers have fought through a hectic schedule & will welcome a light month to get their squad back to full strength. Then we’ll see what Jeff Gorton does at the end of February to hopefully get McDonagh a worthy partner. There’s plenty of promise with this year’s group & wins like the one last night shouldn’t be overlooked. Good teams pull out wins at their worst. The NYR are just a little health & the return of second-half Hank from being back at their best.