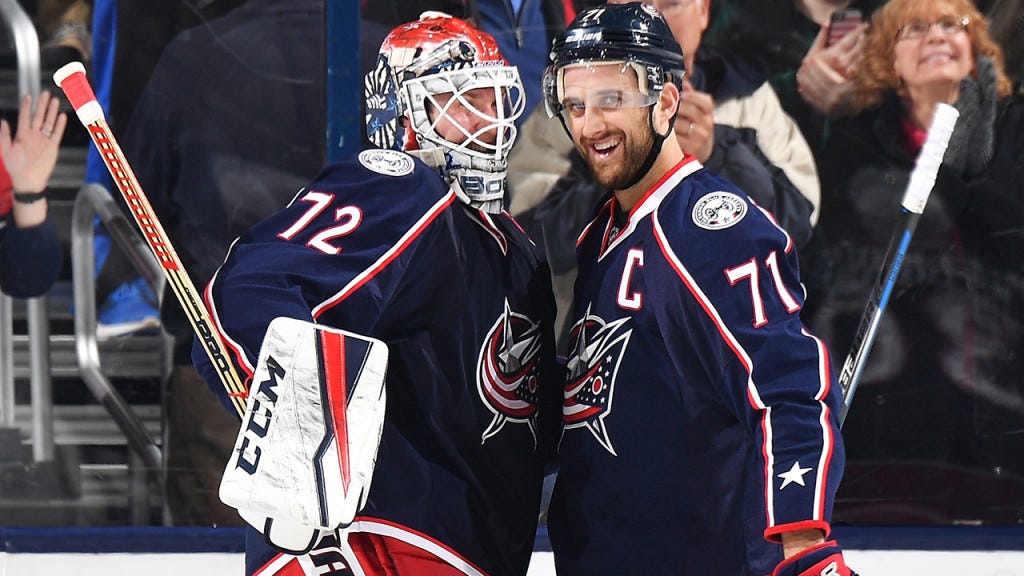 Not 1, not 2, not 3, not 4…. but 13 games in a row after taking down the Bruins last night 4-3 in their first game off the Christmas break. They haven’t lost a single game in the month of December. 12-0 in the 12th month. There are literally 1-month old babies who have never lived in a world where the Blue Jackets have lost a game. Think about how crazy that is. Think about how many 1-month old babies there are in this world. And NONE of them have seen this team lose. It’s ludicrous is what it is. And now it’s gotten to the point where talking heads all over the Sports Media World have to start asking the most important question of them all–could the Columbus Blue Jackets beat Alabama? Are the Columbus Blue Jackets so good that they are ruining women’s college basketball? Could they beat the Browns? Are they better than the ’96 Bulls? I think the answer to all of the above is a resounding “yes”.

Everyone thought the win streak was going to stop at 11 with the Pittsburgh Penguins coming into town but nope. They waxed that ass 7-1. Then everybody thought the streak would end at 12 when they had to play Carey Price and the Montreal Canadiens the next day. But nope. They beat that ass 2-1. Then they have a few days off for Christmas. Maybe the boys would eat too much cooked goose and Christmas cookies to come out with the same jump they’ve been playing with. But nope. You can call them the Columbus C’s because they 1-upped the B’s 4-3.

Oh, and in case you’re a maniac and you’re actually trying to keep track of the rookie race this year…. Here’s a little fun fact  to bring to the table.

22 points in 33 games for a rookie defenseman. I still think Patrik Laine ends up with the Calder at the end of the season but Werenski is #2 right now. Most impactful defenseman on a team currently riding a 13-game bender as a rookie? Not a bad way to introduce yourself to the league.

Sidenote #1: The Minnesota Wild won their 11th game in a row last night after beating Nashville 3-2 in overtime. That’s their 2nd win against Nashville during this win streak. So again… you can just go back to what I wrote about each of these teams last week when they were on a 10-game and 8-game winning streak respectively. All of it still holds true today. This is the longest I’ve been right about something in a while.

Sidenote #2: This goal from Jack Eichel last night was a beaut. Not going to dedicate an entire blog to it so consider this a little prize for anybody who made it to the end of this one.

The fact that he took Vanek out for a walk with a move that Vanek uses all the time makes it even sweeter. So sneaky, looks off the pass, shoulder down, turns the corner and then goes roof daddy. Check please.