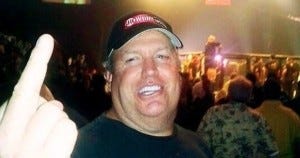 If you consider yourself a fan of pro football in general or the Patriots in particular, or even of just life itself, then news of Rex Ryan’s firing has to make this a very dark day for you. It certainly is for me.

Not to make this all about me, but allow me to make it all about me. No one outside the Ryan family is taking this grim news as hard as I am. Shrex was the inspiration for a thousand posts that virtually wrote themselves. He’s a one man blog machine. A bloviating, ego-maniacal, self-absorbed, endlessly quotable narcissist who is as satisfied with his own accomplishments as he is delusional about how much he’s actually accomplished. Over time, he became the Batman to my Joker. He completed me.

In Rex’ years with the Jets and Bills, everything he ever did or said was potentially blog worthy. Slow news day? Nothing really happening in the world? You could always check what this gasbag was doing and there’d be material. And having him in the AFC East, so you got two games a year, was a godsend. He’s the best Wednesday head coach in NFL history, meaning his press conferences always delivered verbal gold.  And his annual training camp announcements about winning the offseason or how he considered himself to be the best coach, with the best team and the best defense and a bully that no one wants to face were more precious than Unobtanium. And that doesn’t even begin to address the foot fetish video, which is in the running for my single favorite story of my Barstool career:

I’ve written a million Rex Ryan blogs and I rocked them all.

Now, tragically, Buffalo might have been his last bite of the head coaching apple. Few if any coaches ever get the coveted third job. And it seems unlikely that any owner is going to embrace his clown show another time. Which, if you like the Patriots, is terrible news.

I confess there were times when he’d dial up an incredible defensive game plan and I wanted nothing more than for him to be out of the division so I wouldn’t have to worry about Brady having to face those complex schemes that Buddy Ryan passed down to his kids like a family recipe. But when he went to Buffalo and started shooting his mouth off without backing it up, I realized how much he means to us. How, as long he was around selling false hope without delivering, that was one less AFC East team we’d ever have to concern ourselves with. And now that he’s gone, there’s always that one percent chance the Bills will find a real coach. But if there’s a loving and all-powerful God, maybe He’ll make up for an awful 2016 and send Rex to the Dolphins.