Happy Boxing Day to all of our buddies up North and happy World Juniors Day to all. December 26th. Best day of the year, every year. For the next 2 weeks, the best U20 hockey players from around the world will come together and sauce the tits out of each other for world domination. If you need a quick rundown on the Team USA you’ll be seeing this tournament, it’s all right here for ya.

I’ve already mentioned that it looks like the incompetence of USA Hockey has made its way to the junior level. The roster put together for the World Cup was one of the most embarrassing pieces of trash in the history of hockey. The team went to an all star tournament and just forget to load the roster up with all star scoring talent. Which looks like the route the U20 team is heading in after cutting Alex DeBrincat, Logan Brown and Chad Krys from the lineup. But the team is still stacked up front and luckily they get to open their tournament against Latvia. A nice easy way to get a lot of different guys involved right off the bat.

The game is being broadcasted on NHL Network for everyone in the United States. TSN for all you hosers up in Canada. And then I’ll post some streaming options once we get closer to puck drop. Also–make sure to follow along on Twitter @BarstoolJordie for live updates/keep checking in for highlights and updates in between periods. I know. An actual live blog on Barstool Sports [dot] com? Who would have thought.

USA dominated play and the puck may have been past the USA blueline for a total of 60 seconds the entire period. After some boner inducing puck movement on the powerplay, the Americans were able to get a 1-0 lead off this sneaky release from Patrick Harper.

But just as everyone expected, USA is missing some pure scorers from the lineup. So after 15 minutes of dominating play, they still only had a 1-goal lead. Allowing Latvia to tie it up.

Not the best visual there for Team USA and not a great sign for anybody who took USA -6.5.

A few defensive breakdowns here and there for Team USA that period and Latvia got plenty of odd man rushes. Plenty of 2 and 3-on-1’s for Latvia early in that period. Then USA figured out their shit and BC’s Colin White gave them the lead off this beauty of an assist from Tage Thompson.

You’ll probably see Colin White in Ottawa the same day his season at BC ends this year. Bar south. But yeah, that touch pass from UConn’s Tage Thompson was extra smooth. He had a chance to score himself earlier in the period but he ended up breaking some poor Latvian kid’s foot instead.

Then right before the end of the 3rd, BU’s Clayton Keller came through as the insurance man to pad the lead before intermission.

Expect to see a ton of from White, Thompson and Keller this tournament. And so far the goals for team USA have come from BU, BC and BU again. Not too shabby.

And oh yeah. Brian Burke is looking sexy as fuck tonight in the stands. 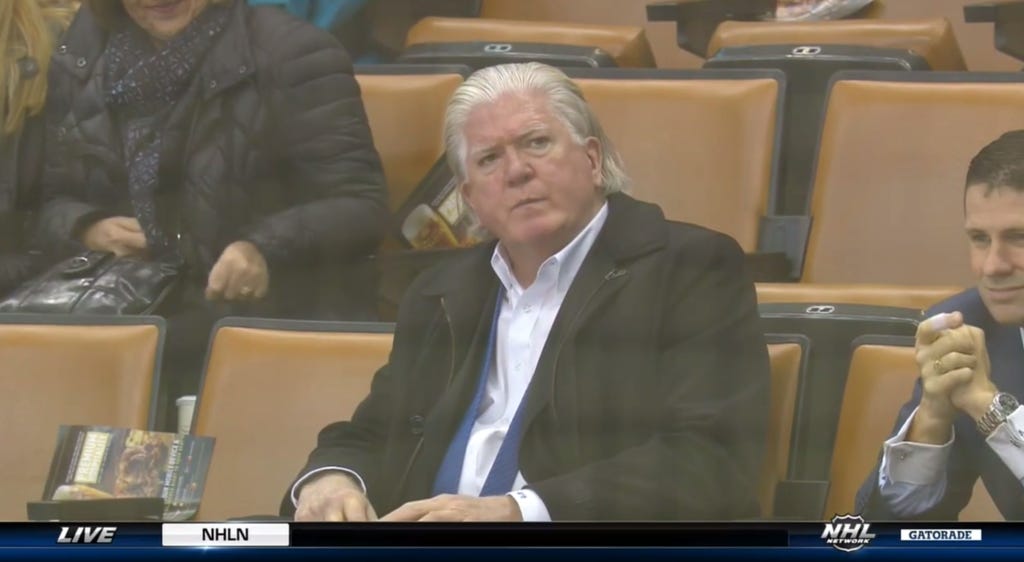 20 more minutes to score 3 more goals for those of you with the over.

Clayton Keller got it going again and gets his 2nd of the night to put the boys up 4-1.

Such a sneaky little bastard that Arizona gets to add to the mix eventually with Domi and Dylan Strome. Then Maple Leafs prospect Jeremy Bracco must havve gotten sick of the Boston kids having all the fun out there and decided to join in himself.

Bracco played 5 games for Boston College before heading to Kitchener in the OHL. So 5-1 USA late in the 3rd. For most American fans, they’re happy enough with the win. For others who had a little action on the game, they still needed another goal to make the victory taste even sweeter. That’s where BU’s Jordan Greenway came in.

Over City. Bang bang. Now we’re on to Slovakia on Wednesday.