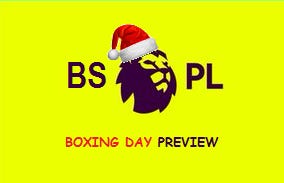 Mom got you a book. Dad got you floor mats for your car. Nana got you some long underwear. Not really a Christmas to write home about, but wait what’s this… aww yeah, the EPL is here to make it all better by getting you the best televised soccer money can buy for NINE out of the next TEN days starting with what Americans would call “tomorrow” – or what much of the rest of the world calls “Boxing Day” (so named because of the ancient tradition whereby the oldest male children in towns throughout the United Kingdom used to get together and engage in pugilistic tournaments for family honor and to determine who got first choice of brides from the local supply of womenfolk).

2016’s days are numbered and we’ve got some annual awards to hand out butttttttttttt I’m gonna hold off and include them in the last post of the year (slated for New Year’s Eve).

Before we get to the good stuff though a couple of things to touch on from the world of soccer, including…

but credit to Palace, they made sure the dance floor at their Christmas party is still gonna be lit af

– Funniest part about Alan Pardew getting sacked (again) is that – just like with Sam Allardyce – it is only a matter of time until he turns up as the coach of Sunderland or Middlesbrough or Leeds. That’s just how things work with British managers and clubs outside the top six or seven. They start out bright-eyed and bushy-tailed (usually a couple of years removed from their playing career) with fresh ideas and an ability to connect with players, and based on this “potential” (and because they are British) they bounce around from club to club, hanging around for a few years until fans force management to jump across the fence to where the grass is ostensibly greener. And these clubs make the jump over and over and over from Pardew to Allardyce to Mark Hughes to Roy Hodgson to Harry Redknapp until, as recently happened with Redknapp, one of the guys gets a little too old and crotchety, and gets put out to pasture for good, thus making room for the next wave of Eddie Howe’s, Sean Dyche’s and Gareth Southgate’s to weasel their way into the cycle of (well-paid) mediocrity. And yet against this backdrop there has nevertheless been a low-lying but always perceptible resentment about Swansea’s decision to hire Big Bad Bald Bob [Bradley for the n00bs in the audience], because god forbid a club without the means to splurge on a Jurgen Klopp or Pep Guardiola do anything other than pick blindly from the familiar list of microwaveable candidates and hire Neil Warnock. The unspoken discontent crystallized this week in a backlash towards BBBB’s absent-minded use of “PK” – an “Americanism” for what the Brits call a “penalty” (short for Penalty Kick) – which makes me angry enough to punch baby seals. Only people with tiny brains and smaller penises give a shit about whether someone calls them “cleats” rather and “boots” or “field” rather than “pitch”. Point being: give Bradley a transfer window or two then let’s talk. /end rant

– Shouts to Geoff Cameron. Takes guts to tell the world that you’re a furry. 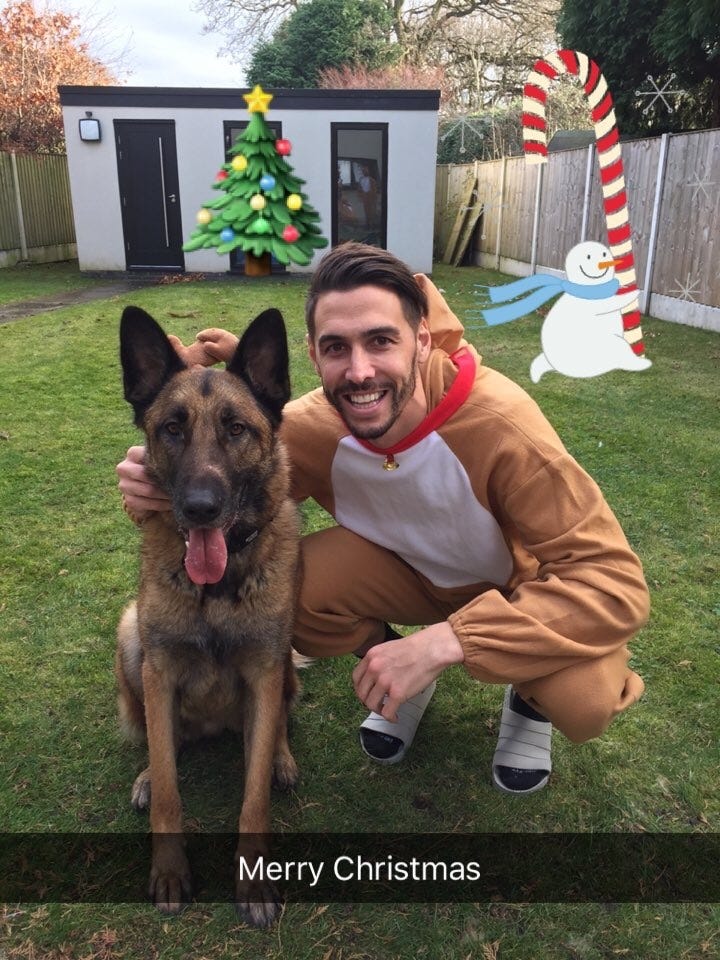 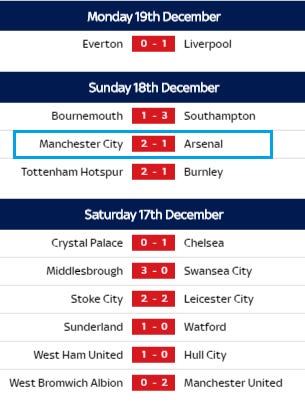 Suppose it was only a matter of time but someone – likely representing either La Liga or Bundesliga – snitched on my Vine account, which has been officially “suspended” (ie, unofficially terminated) for posting “proprietary material” so this week’s highlights are going to be a bit more abbreviated than usual…

– The line between gods and goats has never been thinner:

Sidenote: Ozil’s old googly-eyed ass is incredibly talented but in case you were asking yourself why, given all his obvious skills, he never seems to on the verge of making the jump to being among the world’s best… welp, it really comes down to one thing: laziness.

– Injury time game-winner by Sadio Mane in the Merseyside Dærby had to be one of the most soul-crushing losses for any club this season. Stay hot, Everton!

– Speaking of staying hot, all the golf claps for Sunderland. Black Cats gonna make it an absolute dogfight with somebody (Burnley? Palace? Swansea?) for 19th place.

After 17 games this is what we got: 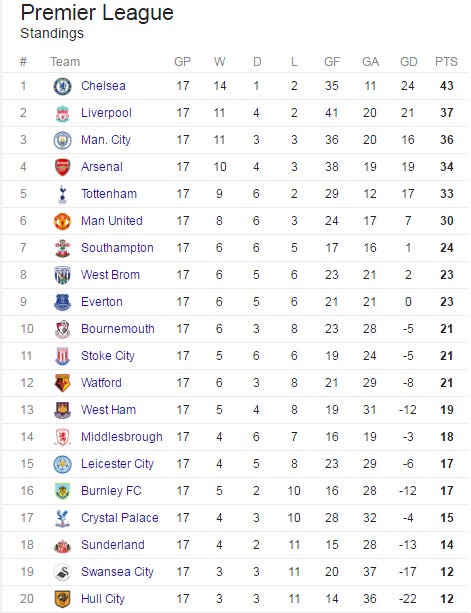 And here are the games on deck: 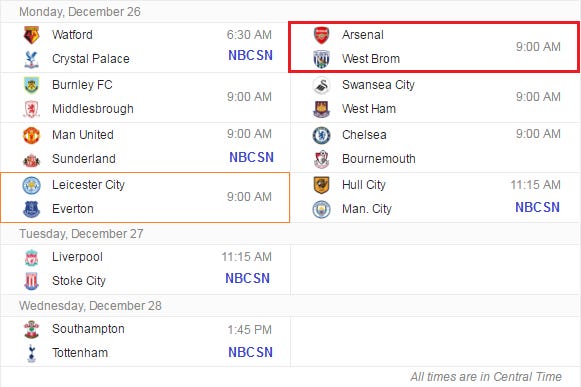 Arsenal’s mental midgetry is legendary at this point, but at the same time they have the type of skill that always makes them an awful matchup for the Brommies. Want-to only gets you so far against the Ozil and Lexi Sanchez’s of the world. Plus, you just know Tony Pulis’ New Years’ resolution is to make a beeline for lower mid-table. Arsenal winning 3-1 will be a good start. 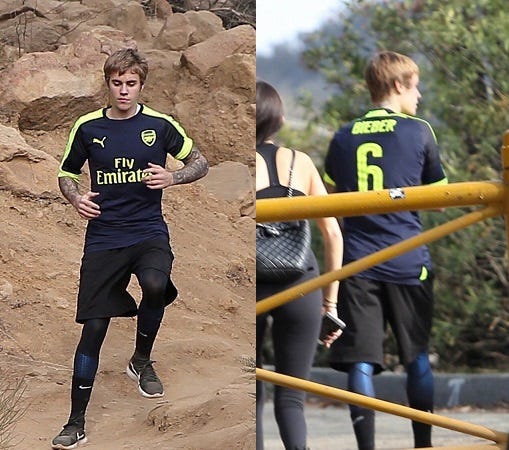 Unfortunately the two most “interesting” games of the weekend aren’t going to be televised (unless you have Live Extra available on DirecTV like me cause I’m rich [except I’m visiting the parents this weekend who don’t have it so fml]), but this game features two teams that have made it exceedingly difficult to know what to think about them this season. Everton came out of nowhere to beat an in-form Arsenal then looked like absolute dogshit against Liverpool on Monday. The struggles of EPLeicester (versus UCLeicester) are well known at this point. So what to expect from this one?

You hate to see injuries and suspensions turn the tide in a game but that looks likely to be the case in this one. The Foxes will be without key players in the front (Jamie Vardy), middle (Christian Fuchs) and back (Robert Huth) due to suspensions while MF Danny Drinkwater may also miss out because of a knee problem. The Toffees have accumulated a grand total of ZERO points from its last four road games but EPLeicester has slumpbuster written all over it. Everton to win 2-1. 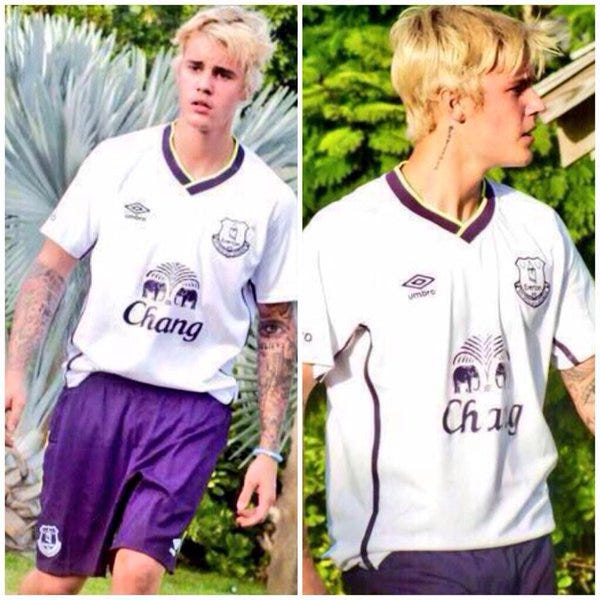 • SAM’S LOCK OF THE WEEKEND: Bookies must know something important because there is no obvious explanation for why Watford [+125] at home would not be a bigger favorite against a visiting Palace [+200] side that not only has been poo-poo lately but also just brought on a new coach. If you think the “Big Sam Effect” is more than smoke and mirrors then you got another thing coming. Watford to win 3-1.

• United [-475] are on a 10-game unbeaten streak in all competitions and get Sunderland [+1200] fresh off an unexpected win (note: all wins by Sunderland home or road against anyone in 14th place or better is by definition unexpected), which – using my rule of never betting on a relegation contender after a surprise win – means that Jozay’s boys should be in for a walkover. I just don’t buy it though. Not so much because Jeramine Defoe and Fabio Borini are going to strike fear into the Red Devils’ defense, but more because Marcos Rojo has been THIRSTY for a red card and the combination of Valencia/Darmian is not what top four dreams are made of. I want to go draw on this one sooooo bad, but can’t do it. Betting on Sunderland on the road, even if Mhkitaryan is still sidelined, is a recipe for getting poor. United to win 1-0.

• Last season Burnley [+200] and Middlesbrough were facing off in relative obscurity in the Championship. What a difference a year makes. The Clarets have been garbage away from home this season (though the performance against Spurs last week was more impressive than the result might suggest), but things have been a bit different at Turf Moor. Boro, despite the impressive win against Swansea last weekend, is useless on the road. Burnley to win 3-2.

• Chelsea [-300] racking up yet another unimpressive 1-0 win over Bournemouth [+750] would make all the sense in the world, particularly given the absence of Diego Costa and N’Golo Kante due to suspensions. Chelsea to win 1-0. 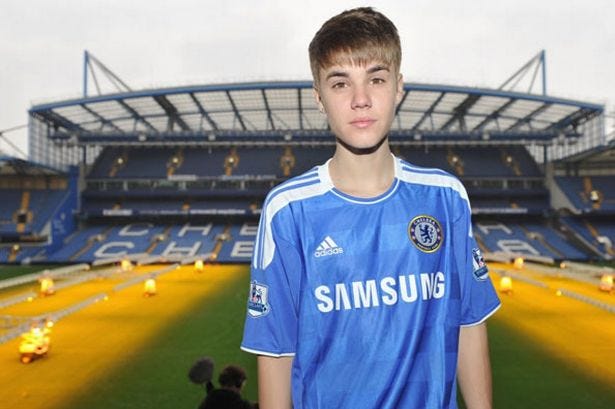 • Liverpool [-375] looked listless but got the job done against Everton, which put absolutely zero pressure on the Reds’ delicate center back pairing of Dejan Lovren and Ragnar Klavan. Stoke [+900] is likely to put up more of a fight, though the absence of Marko Arnautovic is a huge loss for the Potters. Like the Sunderland game I’m itching to go with a draw in this one but just can’t pull the trigger. Liverpool to win 2-1.

• And finally some quick hitters to increase the chances I end up getting one right: West Ham/Swansea draw because Hammers are too damn banged up, City over Hull just because, and finally Tottenham over Southampton because Spurs are FINALLY getting healthy.

Spain: too lazy to play

Germany: too lazy to play

Italy: too lazy to play

So there you have it. “Boxing Day” games stretch out for a few days then we got an off day on Thursday then no days off until January 5th. Check ya in a couple sleeps. Happy holidays and thanks for reading, peoples.