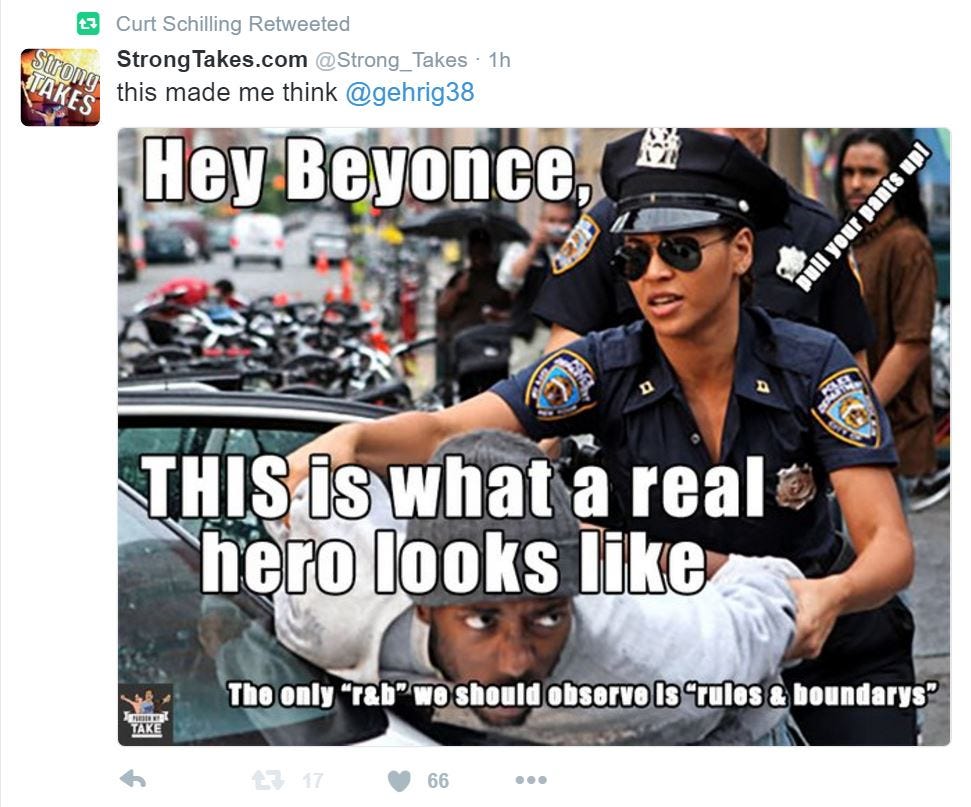 If there’s one thing we’ve learned about Curt Schilling over these past couple weeks its that he is literally addicted to memes. He won’t stop sharing them even though they’ve gotten him suspended multiple times and then fired from his job. Last week on Pardon My Take , Big Cat and I decided that come hell or highwater we would make a meme that Curt Schilling retweeted or shared on facebook. Today that dream came true after I spent like barelyy 15 minutes making this incredible Beyonce meme that he retweeted pretty much instantly after I sent it to him from my strong takes twitter handle. I knew there were a couple of Curt’s buttons I had to push to get him to repsond. Like I knew I had to use “impact” font which is basically like catnip for internet dads. I knew I could appeal to his probable hatred of people who wear there pants too low. Just a hunch I guess. And I also knew it had to appeal to his love underapprecated people in today’s society like police officers, folks who aren’t celebrities, and Curt Schilling.

1. Turns out this police officer is actually Beyonce dressed up as a police officer from her “if I were a boy” music video. Innocent mistake on my part

2. Pulling your pants up would be impossble for this guy because a) he is handcuffed and b) just like any other red-blooded American male, he is doing a waistband boner tuck because literally Beyonce is patting him down to see if he’s keystering any drugs

3. Open invite to come on Pardon My Take to discuss this Curt. Just say the word and we’ll get you on. And if your out there and aren’t subscribing to Pardon My Take please fix that immedately here.