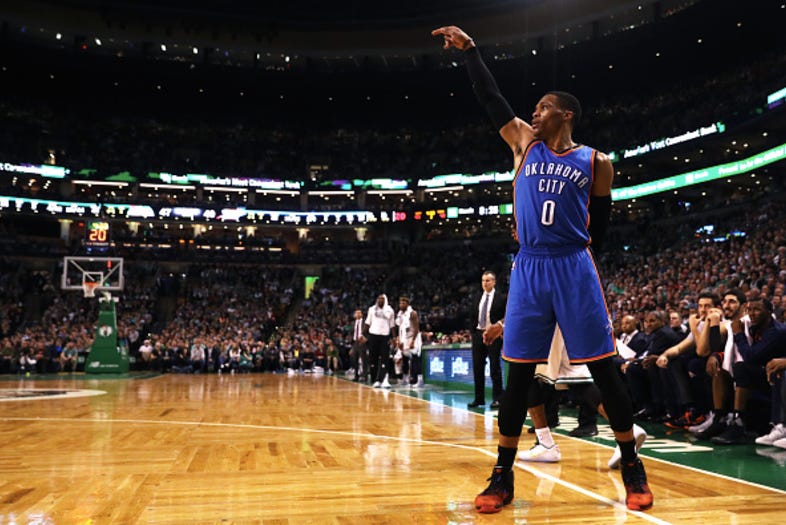 First off, Happy Hanukkah to all my fellow tribesmen/woman. I hope your house smells as good with latkes aroma as mine does.

What else can you say, Russell Westbrook is fucking amazing. Nobody loves moral victories more than your Boston Celtics, and while it’s comforting to know that in order to beat them you have to get a historic and career performance from someone, the bad news is that seems to happen all the goddamn time against this team. After the nice little stretch the Celts had and the trolls had to remain under their bridge, last night was their chance to flex their hating muscles right before the holiday. Now it’s back to, this team can’t beat good teams, it doesn’t have a closer, etc etc. That’s how it’s going to be every time the Celtics lose, and by now I’m used to it. Russell Westbrook is going to win the MVP, and we saw why. A loss like this almost makes you forget all the shit Isaiah did to even make this a competitive game, and when I thought about this loss there were a handful of OTHER reasons the Celts came up short other than Westbrook nearly dropping 50.

The freaky thing was how similar this game was to their first meeting of the year in OKC. At the end of the day Westbrook took over the game and was simply too much down the stretch. The threes he made to end this game were both really well defended and something I think you live with given his career history shooting from deep. He just made them, plain and simple.

So while we add this to the list of tough pills to swallow, there were also some positives to take away so let’s not act as if the fucking sky is falling and the season is ruined, which is something I saw immediately following the loss.

– It really sucks to waste such a crazy Isaiah performance. Matched up against really the only other fourth quarter player on his level, this was s true heavyweight fight. If after the week Isaiah’s had you still choose to bad mouth him or anything like that, you’re doing it simply to troll. His 34 points and 10 assists on 12-22 shooting is the reason the Celtics didn’t get blown out let alone had any sliver of hope to win this game. When the Celtics needed him he rose to the challenge with 18 huge fourth quarter points to save the team from a horrific third quarter. What made Isaiah so effective in that fourth quarter was how aggressive he was. Right away he didn’t dick around and try and get the Celtics back into the game from behind the line, he did it by taking it to the basket

Obviously with no Westbrook on the floor there wasn’t any guard with a glimpse of hope of staying in front of Isaiah, and what I love about these two drives is how well they set Isaiah up for his next basket on the next possession.

But even after nailing a three Isaiah doesn’t settle. On his next basket he very well could have taken the three from the wing, but instead look at how wide open the paint is, this is about as easy a play as Isaiah can have.

And then, when it came time for him to make a play in transition, he did and just like that he brought the Celtics back basically by himself.

Now down the stretch, this was a tough pill to swallow because of the following sequence. First you have Isaiah making 3/4 of a basket that would have tied the game

Well what do you think the next possession was? Westbrook’s first dagger

But then wait! There goes Isaiah matching with a three point play of his own!

I dunno but these are plays that big time players make in big time moments, which leads me to the next possession. Westbrook’s dagger number two

So you can see why I’m not overly upset. The Celtics were an in and out bucket away from perhaps completely changing how the end of that quarter went. I can live with that.

– Hey on the plus side this was another great effort from Amir. His energy and effort come in spurts, and right now we are in the middle of one of those runs. When Amir is engaged he is a useful player, it’s just the consistency that drives you mad. Do I think 17/6/5 is sustainable? No way, but the effort sure can be and if that’s the case then he’ll actually be worth the minutes he gets.

– We always say we want aggressive Al Horford, and we’ve gotten it the last few games. Nothing made that more clear than his coast to coast dunk. That shit was crazy. Overall he shot the ball pretty well (8-17) and it was nice to see him go 3-6 from deep since he’d been on a pretty awful three point shooting run. An overall line of 23/6/4/2/1 is pretty good considering how much he struggled against Adams the last time they played, and he did an OK job keeping his man off the offensive glass. Horford’s night is most likely going to go under a lot of people’s radars considering what Isaiah and Westbrook did, but that doesn’t mean it wasn’t pretty good.

– I love when Jaylen Brown gets minutes. I love even more when he uses those minutes correctly. His drive for a bucket and a foul early in the second quarter was a great example. The Celtics needed buckets and he realized that he is an athletic freak you can overpower opposing players despite being a 19 year old rookie. Then around two minutes later we had a Jaylen Brown on the block turnaround jumper for a score. These are the types of plays that are going to win Jaylen minutes, not terrible 26 foot jump shots.

– I woke up a lot of people when Marcus Smart made that block. I apologize for nothing.

– Few things bother me more than wasting a game in which you have more points in the paint and second chance points, and especially more fast break points. Usually when that happens the Celts win, but it was still nice to see because these are effort areas.

– I don’t care how much potential he has. I don’t care who his Dad is. Domantis Sabonis doing what he did to you in this game is flat out inexcusable. Add him to the list of Shitty Players Who Are Shitty But Play The Celtics So They Aren’t Shitty Award winners. He is averaging 6 points a game. He had 20. Literally had a career night. I am so sick of these role players having huge breakout games. Granted he was hitting WIDE open shots, but jesus christ. You want to know why the Celtics lost this game? There’s a huge part.

– Let me ask you, do you think 5 missed FTs, three of which came from Avery Bradley, would have helped in a game you lost 112-107?

– It was disappointing to see how frequently the Celts were beaten by backdoor cuts in this game. It happened throughout the entire game, and to me that’s just lazy defense. Seeing it happen to guys like Avery were especially puzzling.

– Speaking of Avery, it is some shit luck that as good as a defender as he is, Westbrook shot 7-11 while Bradley was his primary defender. I can’t remember the last time someone had that sort of success against Avery.

– The bench is still an issue. Marcus shooting (3-10) is still a major issue, and really for another game they had to deal with getting almost nothing from their second unit. Once Isaiah and Horford came out to start this game, the offense stalled. In the third quarter it didn’t get much better either. The second unit bigs were abused by Kanter (20 points) just like they were in the first meeting, and anytime you have to go to Tyler Zeller you are clearly desperate.

Olynyk took one shot and he’s supposed to be the shooter of that group. If we want to talk about areas of concern for this Celtics team, we need to shift gears from them “not having a star” to, “how the fuck are we going to fix the second unit”.

– Hard to get calls at home. I’ve often said that.

– We got more jump passes in this game and guess what, it lead to more turnovers! The biggest culprit was Isaiah, which brings me to the only blemish on his night. His 5 turnovers are way too many, and unfortunately they came at the worst time. In fact, when you rewatch it, he should have had three brutal turnovers in the last 3 minutes or so. Here they are

You could argue these turnovers lost them the game, and you’d be right to some degree. Any other player makes these mistakes and I crush them, so by no means am I letting Isaiah off the hook. These are inexcusable mistakes, but I also look at the bigger picture. There is no close game without him, he’s averaging 2.0 TOs on the year with an 8% turnover rate. Brutal mistakes at a brutal time, but that shit happens sometimes.

– The Celtics cannot keep dropping home games. Now they haven’t been fully healthy forall 12 of their games (6-6) but chances are they start to level out with how well they play on the road, and with a home heavy January they need to take care of business at home. I don’t care if it’s a good team or shitty team, if you can’t win at home you can’t win shit.

So while this was not the result I hoped for on the eve of Hanukkah, at least we get to turn around and play at MSG on Christmas against the Knicks. Now personally I hate playing on Christmas because it has been a thorn in the Celtics side, but give me a win against a team that’s 11-4 at home and actually in your own conference and I’ll feel much better about dropping this game. Gladly we won’t ever have to face Westbrook again this season, and it’s not as if the East is loaded with that type of talent so in the long run everyone just enjoy the holidays and relax. Things will be OK. 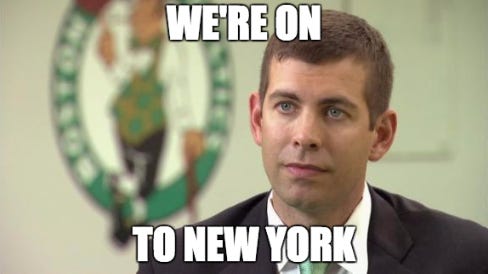