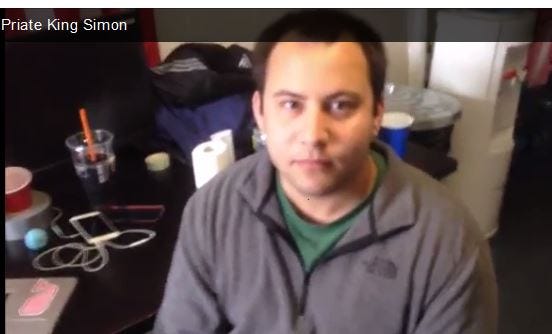 So the last time we heard from Pirate Simon he was thanking all his supporters and demanding an apology from me before he would even consider an internship. Below is the blog I wrote at the time.

So Pirate Simon quit/retired from Barstool Sports last night. (Yes I realize that he didn’t really have the job yet but that’s semantics) I actually sent him an email telling him I wanted him to come in today. My plan was to offer him the intern job provided he’d wear an eye patch for the entire summer. But before I had the chance he sent me a fairly long email demanding an apology first. I countered with my eye patch proposal which he flat refused. And so ends the saga of Pirate Simon at Barstool Sports. Gone but never forgotten. Yet another shooting star in the Barstool constellation.

PS – I will say I got a kick out of him announcing his retirement via twitter before I could say anything. Old Michael Scott trick. Alert the media, and then you control the story. Wait for them to find out, and the story controls you. Also Pirate Simon thanking his supporters on the way out the door is sneaky the funniest thing in a long time here at Barstool.

Congrats on everything that’s happened with the company. Does that offer still stand? I’ll dress like a pirate for a whole year.

Ohhhhh Maaaaannnnnn! Can you hear that!  Oh NO! That’s Pirate Simon’s music!

But imagine Simon dressed as a pirate for an entire year? I’ve already discussed it with the guys and the possibilities are endless. My first move would be to make Simon walk the plank. Not even joking. Find a plank somewhere and push him into a body of water to prove his loyalty all while dressed as a pirate. My giant brain is paralyzed. I know Pirate Simon will yield unbelievable content. I also know I’ll push him so hard he’ll break and go insane and put the entire office in danger. Sometimes being the #2 in command ain’t easy.