CBS- Gov. Andrew Cuomo has unveiled designs for New York City subway cars equipped with wider doors, Wi-Fi and phone charging stations, but questions remain about how the state intends to help pay for them. The governor said Monday that the upgrades at the Metropolitan Transit Authority represent the greatest mass transit investment in city history.

The $27 billion plan calls for new and upgraded subway cars and buses, better control technology and redesigned subway stations. Thirty-one stations will be overhauled and MTA President Ronnie Hakim says the larger doors will allow passengers to move in and out at the same time.

Great to see that the MTA is finally upgrading that nightmarish labyrinth of stink that we call a subway. Granted most of these changes will be obsolete by the time they are finished. The iPhone wasn’t even a thing 10 years ago. 10 years from now, WiFi and USB will probably be replaced by something that would make my brain explode if someone tried to explain it to me today. But at least its a move in the right direction and will only cost $27 billion. And since I don’t think you should complain about the problem unless you want to be part of the solution, here are the changes the MTA plans to implement, with some changes of my own.

First we have the outside of the train:

And here is my mock up: 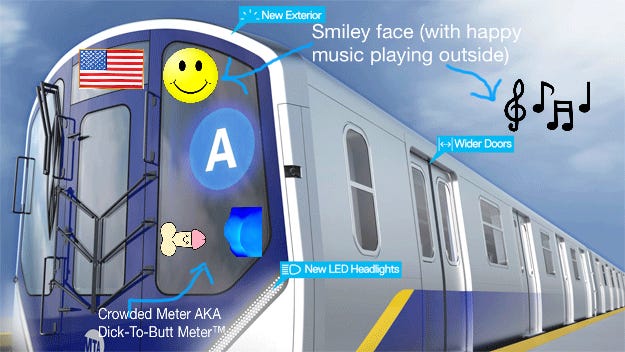 – The first addition is pretty basic. The American flag should always give Americans a sense of pride and happiness, even during their soul crushing commutes. So I figured put that image right on the front of the train to let people know that while your quality of life is about to plummet during this train ride, it could be worse. You could be living in a country that isn’t America.

– And in case that didn’t work, we are adding a smiley face to the beginning of the train. The OG emoji. Between the flag and the happy face, you should be walking onto the train with a smile on your face. And just to make sure you are happy, the outside speakers of these new trains will cycle through some of the happiest songs known to man as they arrive in the station.

– The other addition is a very important one. Usually you have to figure out just how crowded a train is by eyeing it as it rumbles past you in the morning. Not any more. Our patented Dick-To-Butt Meter™ will let you know just how crowded a train is the second it enters the station. The closer that dick is to those cheeks, the closer your dick will be to someone else’s cheeks due to the crowd. If you are only seeing balls in the meter, our advice is to wait for the next train.

Next we move to the subway platform: 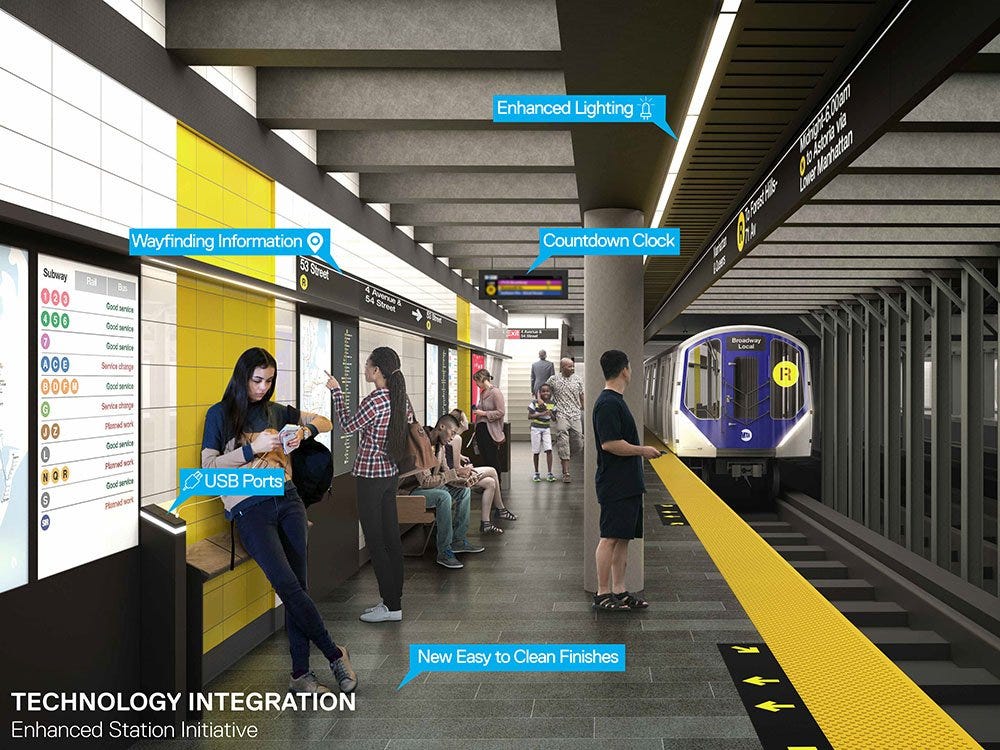 And again, my mock up: 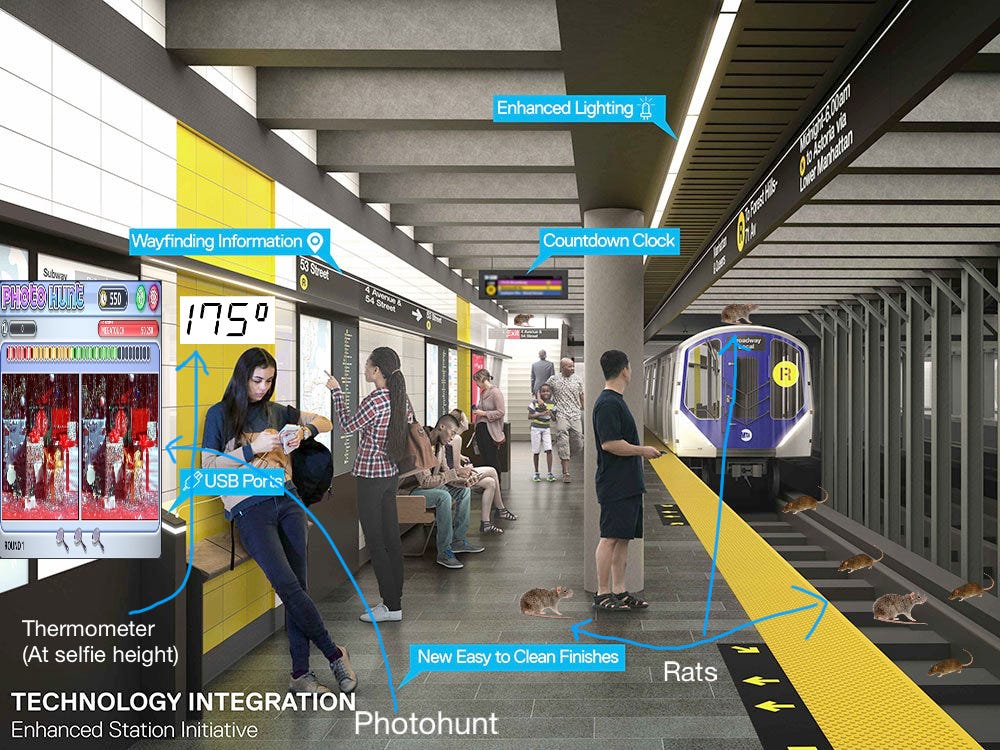 – Obviously the rats weren’t a feature that I added, but instead a part of the subway the MTA forgot to include. And if the MTA does any sort of construction on the existing platforms, that construction could wake up The Rat King from Ninja Turtles and shit could really pop off. 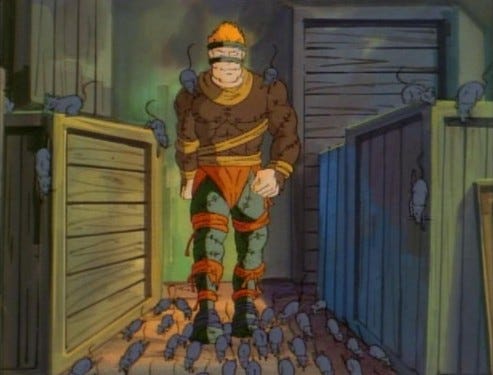 – Next up we have the digital thermometer. Not really sure why we need it down there, but I feel like seeing triple digit temperatures during the sweltering summer would be entertaining in a “haha I can’t believe I pay through the nose to live in this god forsaken city” kind of way. And of course the thermometer will be low enough for people to take selfies with it so they can complain on Instagram about how hot it is underground.

– I replaced the map of the subway with a Photo Hunt. If you can’t use your phone to figure out how to get where you are going, you are already beyond fucked. Photo Hunt was the best bar game and could unite people of all sorts of backgrounds. Except for the one drunk asshole that would just start touching the screen and knock a bunch of time off the clock. But fuck that guy. He gets pushed onto the tracks in a subway.
And yes, we will have the naked Photo Hunt. Any other type of Photo Hunt is utter trash compared to it.

And lastly the inside of the train: 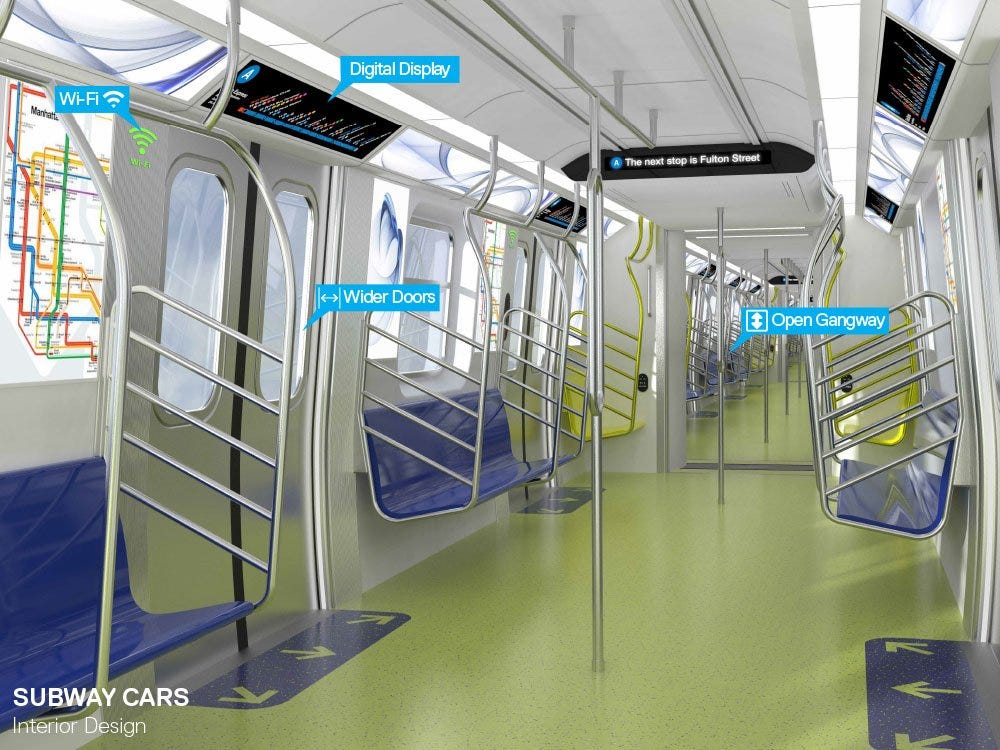 And my mock up: 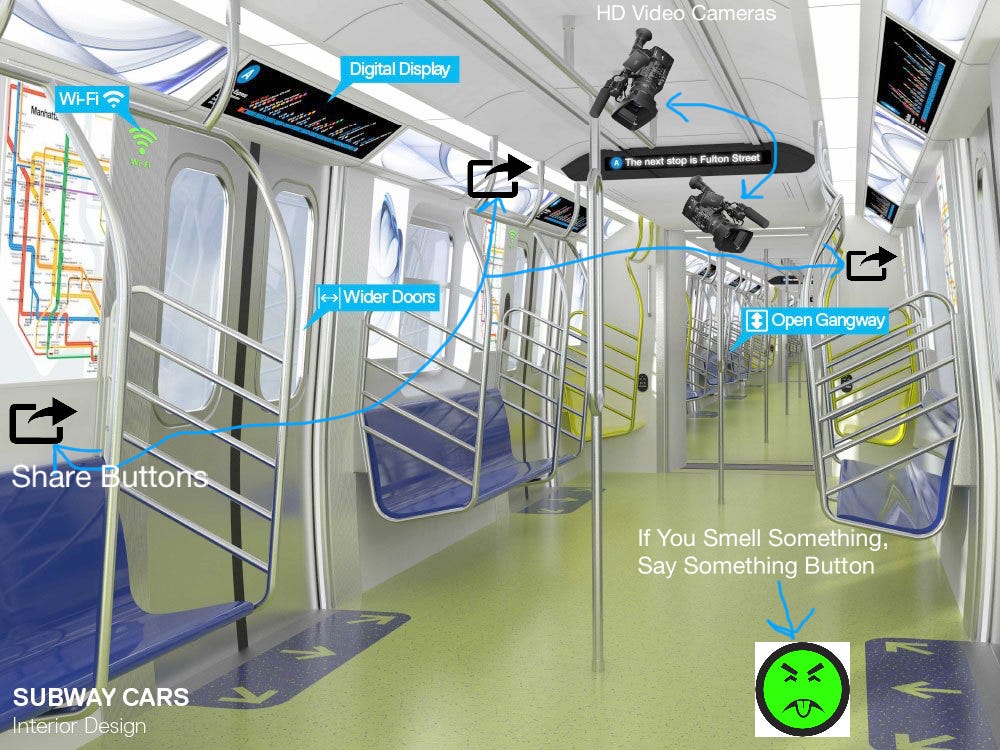 – The first and most important thing is the “If You Smell Something, Say Something” button on the floor (h/t Mr. Yuck). There is nothing worse than thinking you hit the jackpot with an empty train only to find out its empty because a homeless person either died or smelled like they died in that train. Pressing the button alerts the MTA to remove said homeless person and spray that train with New Sneaker Smell.

– I know some people will be a little put off by the addition of visible cameras everywhere. But trust me, this is a win in the end. First of all, this world is going to hell in a hand basket. Every day is some other story about how shitty we are as a society. So having cameras capture your commute is partially about safety.

– But the real bonus of those cameras is that if you see something ridiculous (such as a weirdo eating a stick of butter like a candy bar), you can simply push the Share button, conveniently located around the train so you don’t have to awkwardly try to tape this lunatic on your phone, and it will be sent to a content curator at the MTA or here at Barstool Sports. We thank you ahead of time for your service.

– One thing I didn’t touch were the yellow seats at the end of each train. But I firmly believe they should be painted red. That’s the homeless person’s favorite seat. Red means stop. If you don’t want to sit where a homeless person was likely sitting/shitting for the last 8 hours, stop walking towards that seat immediately.