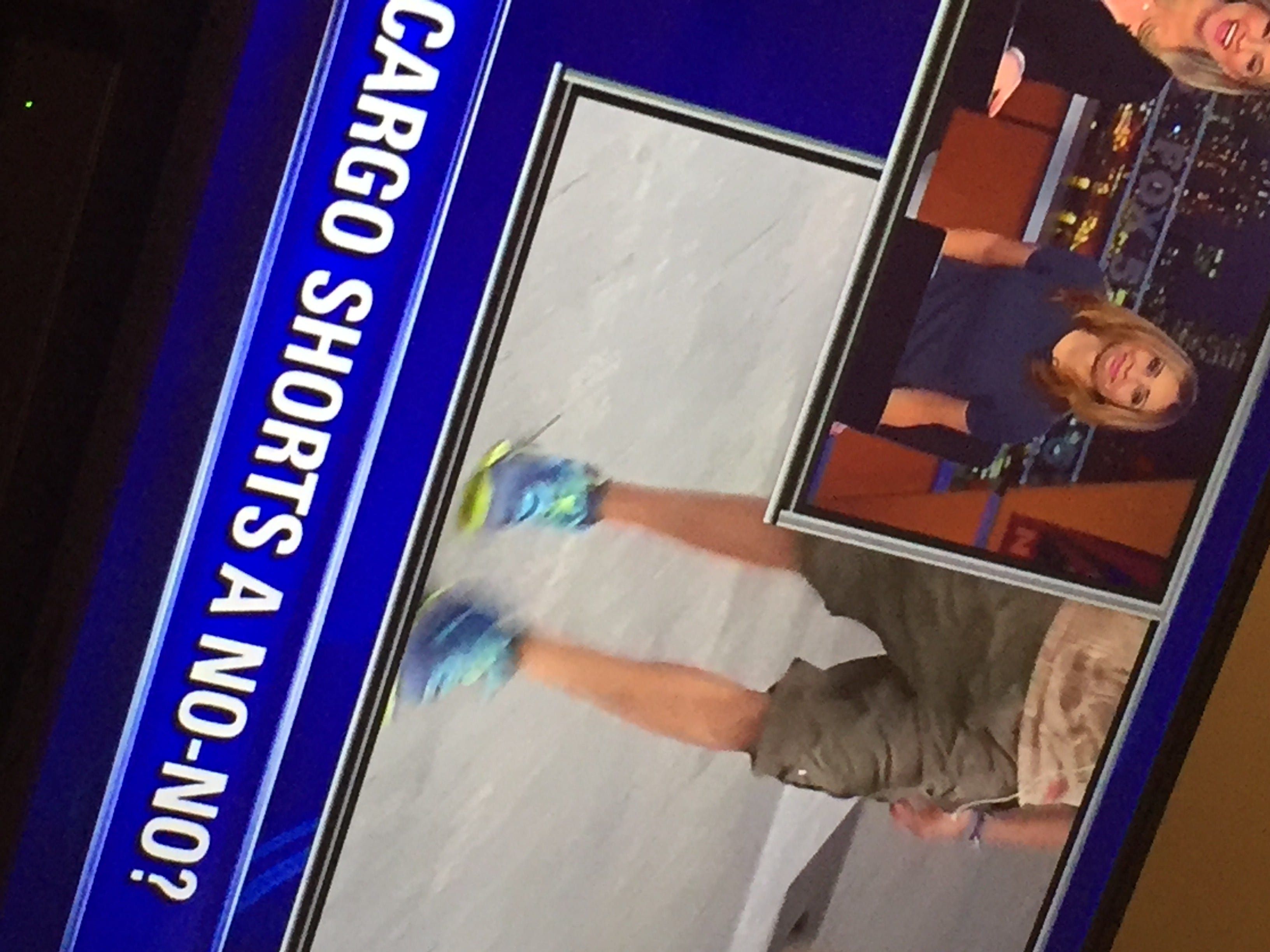 So I was watching the local news last night obviously because it comes on after Bachelor in Paradise and the remote was much too far away. And this was one of the top stories, right there in the A Block – somebody got murdered, somebody got hit by a car, somebody robbed a convenience store, Cargo Shorts A No-No? Two things came to mind right away – one, this poor woman went to an expensive college then however many years of Journalism school and now she’s walking around the Upper West Side asking people about their cargo shorts. Classic Robin Scherbatsky. And two, I swear to god this has been a local news topic every August for at least the past 7 years. I’ve definitely blogged it before. Big Cat blogged it in 2012. Are Cargo Shorts cool. I mean, no. If you have to ask the same question 7 years in a row that kind of tips you off to your answer right there.

But just to get a balanced set of opinions I asked a random assortment of Barstool bloggers. Their responses…

Feits: “The cargo shorts debate perplexes me more than any other argument of our time. It’s like a modern day version of the Emperor’s New Clothes with people marching the streets convinced everything’s fine, while the rest of us mock and jeer. They’re comparable to the atomic bomb, where those of us with a brain know they’re a complete disaster and something we wish we could just uninvent. I truly don’t even understand the argument for them. You can carry more shit? What do you have to carry besides a phone, wallet, and keys? Fanny packs and man purses also hold extra things, but I don’t think you’ll see cargo shorts wearers take up arms for those.

Because cargo shorts wearers are 100% fake tough guys who’ll say caring about what you wear is gay. That’s the only leg they think they have to stand on. “You put effort into your appearance and look in mirrors? What are you a homo.” That’s the only argument they have because while most of us had brains mature past an elementary school playground, cargo shorts wearers did not. Not on a dress level, and not on an insult level.”

Big Cat: “Unless you’re a military member, fisherman, or dad with more than 2 children, don’t ever wear cargo shorts.”

Uncle Chaps: “I think cargo shorts are valuable, and I understand why people wear em but at this point in my life, Im a hard pass. The only exception is if I’m barbecuing. I’ll throw on some cut off cargos so I have more pockets for the seasonings and shit.

There’s a lot of cargo pants shame out there, and I dont fully get why people hate them so much but I wear terrible shoes too. Maybe I just dont get fashion. One thing I do know is the cargo shorts wearers dont thumb their nose at non-cargo shorts wearers unlike the reverse so I err on the side of caution.”

Clem: “I admit it. I’m a cargo short guy. Not by choice but by necessity. I have no need for all the ridiculous pockets. Like most people in the world, my checklist consists of “phone, wallet and keys”.

“But cargo shorts seem to be wider cut and more big guy friendly. To be honest, I wouldn’t have admitted all this if we weren’t going into an office full of cameras in a month (or a decade, not sure when construction will be done). I’ve had the same pairs of shorts probably going back to when cargo shorts were actually in style. But I’m too old, too married, and too poor to buy an entire new wardrobe because I’m worried of what my coworkers, commenters, and internet friends may say about me.”

Weirdo Nate: “If people want to wear cargo shorts, more power to them. I’m not here to tell people what they can or cannot wear. If guys want to wear cargos out to bars, even better. I need more people to start rocking the cargos, maybe throw a chain wallet on those bad boys too, it helps even the playing field for me.”

KFC: “I wish cargo shorts were socially acceptable. They’re like the fanny pack. Completely practical and useful. But, they’re not.”

Smart Guy Riggs: “Anyone who needs to carry more shit than can be carried by normal shorts is not to be trusted. But also not to be fucked with. Would I wear them? No, I’m not a crazy person. I like to be trusted. But when confronted with someone who does I just stay positive and try not to make eye contact.”

Iowa Trent: “I wore cargo shorts every single day of my life until I was 23 years old. I stopped for one reason and one reason only: societal pressure. There’s a stigma attached to wearing cargo shorts that I still don’t understand to this day. They’re comfortable. They’re stylish. They match with every shirt I own. And they’re practical. Never once did I find myself saying, “I need more pockets” because cargo shorts have a thousand of them. If anybody needed a safe haven for their belongings, I was their guy. Yes I’ll hold your cell phone. Yes I’ll hold your keys. Yes I’ll hold your wallet. Yes yes yes. Now? Now I’m just another bum who wears regular khaki shorts cause I was too afraid to fight the status quo. If I could do it all over again, I’d fight harder for equal right for cargo shorts.”

Seems like kind of a general consensus. Can’t dismiss the utility – but that social pressure is a motherfucker.

Being the company man that I am though I tossed up the final say to my new boss.

Got your note re: Cargo Shorts. Thanks for including me, weighing in on core strategic questions for Barstool is important so this feels like a great use of time.

Here’s my take on Cargos. I think Cargo shorts are the male equivalent of flared jeans. If worn right – ideally with a tshirt (A barstool tee is optimal, check out the great selection here) and if you have the legs for them, it’s a solid casual look.

There you have it. Maybe you can pull it off. But probably not. Strong no-go on cargo shorts. Unless of course our merch guy comes up with a sweet pair with the Stools and Stripes logo on it in which case cargo shorts are definitely in and worth probably 35.99 + shipping, maybe even more.

If I had to play devil’s advocate?