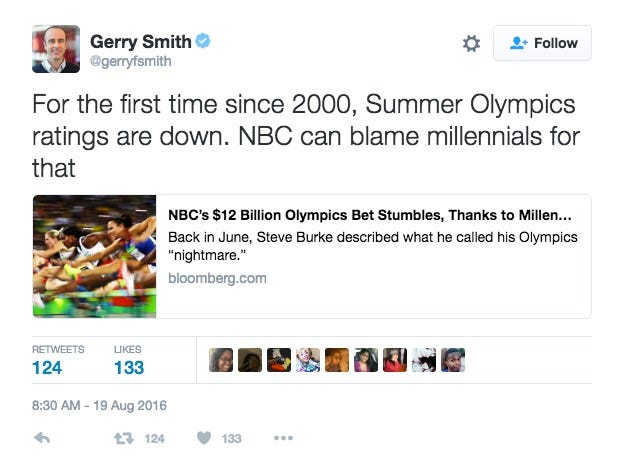 Bloomberg - Back in June, Steve Burke described what he called his Olympics “nightmare.”

“We wake up someday and the ratings are down 20 percent,” the chief executive officer of NBCUniversal said at a conference. “If that happens, my prediction would be that millennials had been in a Facebook bubble or a Snapchat bubble and the Olympics have come, and they didn’t know it.”

He has escaped that with the Rio games this year — but not by much. Prime-time broadcast viewership has been down about 17 percent compared to the London games four years ago. And in the 18-to-49-year-old age group coveted by advertisers, it’s been even worse. That audience has been 25 percent smaller, according to Bloomberg Intelligence.

The Summer Olympics ratings slip, the first since 2000, raises fresh doubts about what used to be a sure thing: live sports would be a huge and growing draw no matter what. That’s why NBC parent Comcast Corp. paid $12 billion for exclusive U.S. broadcast rights to the Olympics through 2032. Others, including Walt Disney Co.’s ESPN, 21st Century Fox Inc., Time Warner Inc. and CBS Corp., have made long-term bets on football, baseball and basketball.

Listen are millennials the Greatest Generation? No we’re not. We’re not the best, we do plenty of annoying shit, I admit that. I’ve been vocal about it on blogs especially when it comes to college social justice warriors and PC culture, and I’ve never hesitated to write an angry blog about it when it’s deserved. But this trend of blaming millennials for everything wrong with the world is stretching pretty thin, to the point where even the word “millennial” is annoying me.

And when you try to place the blame on us for Olympics ratings being low? Oh no no no. That’s something I won’t stand for. Not when you have a massive tape delay on everything and basically eliminated any enjoyment for West Coast watchers. Not when NBC banned anyone from talking about the Olympics on millennials’ main form of communication. Not when you banned our @BarstoolSports account with almost half a million followers for tweeting ONE vine from the OPENING CEREMONIES…and they’re blaming millennials for low ratings? Are you kidding me?

And seriously, we need to reiterate – that tape delay. Worst tape delay of all time. Like, ever. We all know the results of everything HOURS before you air it. From, guess where – social media.

One issue is that many fans are getting older. The average age over the past decade of National Football League and Major League Baseball viewers has increased by four and seven years, respectively, to 47 and 53, according to Ben Thompson, founder of the blog Stratechery.

“Sports is less ingrained in the younger demographic,” said Brandon Ross, an analyst at BTIG Research. “It has been replaced by other things like video games and e-sports and Snapchat feeds.”

What a stupid, offensive fucking statement. The younger demographic isn’t less interested in sports you morons. We don’t play video games and e-sports and stare dumbly at our Snapchats INSTEAD of watching sports on TV. We do all of that to supplement the sports we watch on TV (except the e-sports thing, can’t vouch for that, you’ll have to talk to the nerds about it). You had an army of Barstool bloggers with no lives and no social plans, sitting around their TVs with their phones out, just waiting to live tweet and post blogs about everything that happened in the Olympics, from sports that nobody has ever heard of it outside of the people who compete in there. And you blocked that. Not only blocked it, but you actively legally went after people who did it. I was afraid to even tweet the word “Olympics” because I thought I’d get my account suspended. The Barstool bloggers have over a million followers among all of us combined and we legally couldn’t put any highlights out there. But it’s the 21-35 year olds’ faults that NBC ratings were down. Yeahhh, ok.

Or wait, let me put that in GIF form like a true millennial –

Hey Olympics. Your tape delay sucked. Your Twitter rules sucked. You have no idea how to relate to any audience under 45 years old. Blame yourselves. Adapt or die you fucking idiots.