Last Thursday, a week ago, I went under the proverbial knife and got PRK laser eye surgery. You might know the procedure as “LASIK”, which is the same idea as PRK, just different procedures. While both correct your vision to 20/20 or better, Lasik has a recovery time of basically 1 day, while PRK’s recovery time can linger on for a month or two. It’s still very safe, but the thickness of your cornea decides which procedure you need to get done. Since my corneas are thin, I had to get PRK.

The reason I wanted to get this done was well…I was pretty blind. 20/200 vision is for the birds. I made that money playing poker and decided to go for it because wearing glasses is for the birds. And most of all, I’m not a contacts guy. I’m not an eyes guy. Touching of the eyes gives me the heebie jeebies. And I just got tired of wearing glasses at all times. I was basically blind without them. Sucks when you’re outside and want to wear sunglasses, when you’re at the beach and can’t see shit, playing sports, and so many other times when they’re a big pain in the ass. Like, I play hockey every Thursday and I’ve had to wear glasses under my helmet. It’s terrible. But now, I’m free as a bird.

The biggest problem I had leading up to the surgery was my inability to do anything having to do with eyes. Which is a bit of a problem when you’re getting surgery done on your fucking eyes. I legit couldn’t even put in eyedrops. But the good news is when it’s either “figure out how to put in eyedrops or your eyes will fall out”, you tend to buckle up and figure it out pretty quickly. Well…kinda. 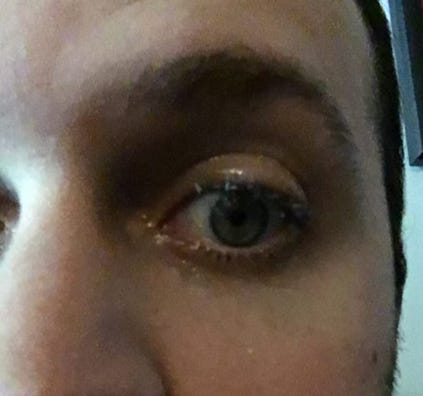 So let’s get into the procedure itself. It’s BIZARRE. Nothing like it. First the doctor, Dr. Perrault, goes over the procedure with you. He basically just reiterates how it’ll go, what he’ll do, and lets you ask any last second questions. Then he gives you a Valium and has you lay down for a few minutes and wait for that to kick in. And by the way, FUCK Valium. Weak ass medicine. It’s tough to get my brain to stop churning a million miles a minute. I’m sure a lot of people have brains like that, they just don’t slow down. It did nothing to ease my anxiety. They gave me another half of a valium which made me kind of dizzy, but did nothing to turn off my brain. But then it was surgery time. 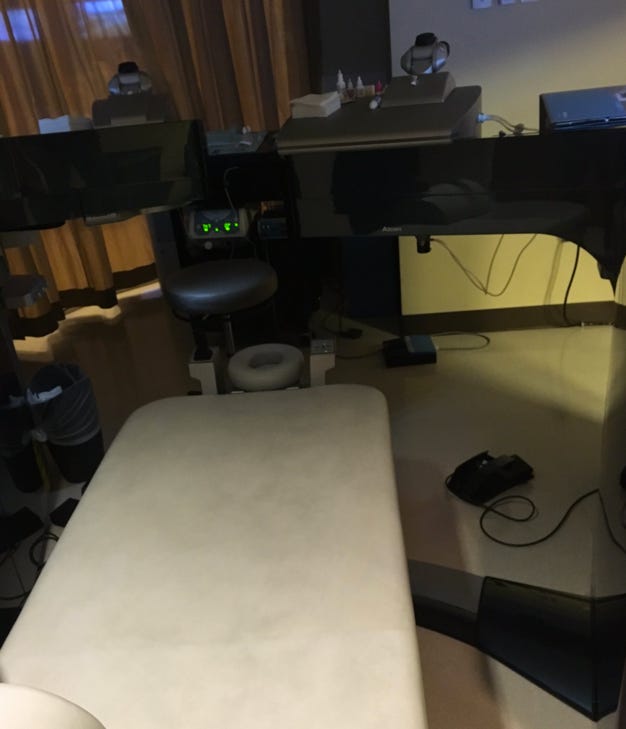 And this is where the magic happens. You lay down, they put a nice warm blanket on you, and Dr. P gets to work. The thing about the PRK surgery is the laser itself takes about 5 seconds per eye, but there is a lot of groundwork that the doctor has to do before it’s time to laser. First, he clamped my eyes open. It’s not quite Clockwork Orange, but it’s clamps holding your eyes open. Then he puts in numbing drops, he cleans the surface of the eye with this white brush thing, at some point he held a q-tip looking thing on my eye as the assistant counted to 30, poured more drops in there, and probably something else I’ve blacked out. I wouldn’t say any of this hurts, it’s just uncomfortable. You’re just not used to your eyeballs being treated that way. And the whole time you’re laying there, trying not to move, while staring at a green dot above you. I highly recommend going to where I went because Debbie, who also works there, will let you squeeze her hand the entire time. They have stuffed animals and stress balls and the like, but I highly recommend a hand. Highly. So after all the cleaning and the prep work, which is what is in the first picture above, it was laser time. 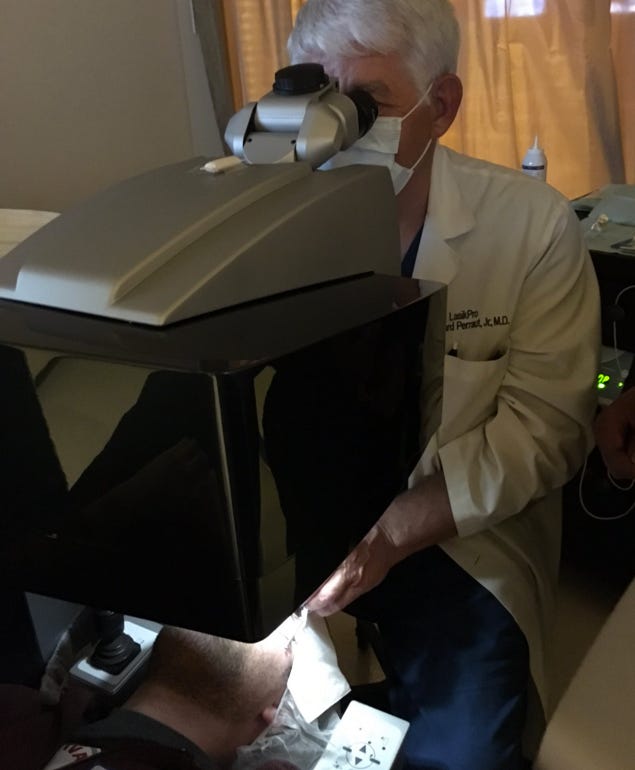 Again, the laser itself took about 5 seconds, and it was on to the next eye.

After each eye was completed, he put in a non-prescription, protective contact lens to protect the eyes while healing.

Now for the aftermath of the procedure. After LASIK, people pop up singing show tunes, perfect vision, and very little pain. If you can get LASIK, I can’t imagine not getting it. PRK, again, a bit longer of a recovery period. Here’s the breakdown:

Thursday after surgery: I felt fine. My vision was fuzzy, but nothing really hurt. I wasn’t in too much discomfort, just kinda wanted to go home and go to sleep. Which is what you’re supposed to do anyway, as the eyes need rest and are sensitive to light.

Woke up on Friday and couldn’t open my right eye. It was tearing nonstop, and just didn’t want to open. Completely normal, which was good to know. That’s where the drops and pain pills come in. Lifesavers. By the time I got to the 8am follow up appointment (you can’t drive, so if you’re looking to get this done, make sure you have someone who can drive you for a few days), my right eye was open and I was feeling much better. Doc said everything looked perfect and I was seeing about 20/25 or so. Everything was still blurry but the vision itself was corrected. Friday was up and down in comfort and pain, just tried to stay ahead of it with my drops and pills, but if you just had your eyes zapped, it’s going to be painful no matter what.

Saturday, Day 3: Doctor Ron told me day 3 would be the worst. Everything I read online told me day 3 would be the worst. Day 3 was the WORST. By noon I hadn’t opened my eyes for more than 5 seconds and it constantly felt like someone was chopping the world’s strongest onion on my forehead. Nonstop tears and the sort of pain you would feel if you went bobbing for apples in jalapeno juice. Zero. Fun. Sir. Ice packs on the eyes helped, but the thing that helped the most was knowing that once you made it through day 3, you were in the clear.

Sunday, Day 4: In the clear. There’s still fuzziness, which will be a theme for the next couple of weeks, but the pain was basically completely gone. Very little discomfort. Even flashes of perfect vision here and there, which is only comparable to when Tobey Maguire starts seeing colors randomly in Pleasantville.

Monday, Day 5: Similar to Sunday, but the eyes felt a bit more tired. Probably because I stared at my phone a bit too mucho n Sunday. I still blogged mostly a full day on Monday like a true champ, but staring at the computer definitely wasn’t the best move. Needed to shut it at times and close my eyes for a while. Watching the NBA Finals at night wasn’t going great, as looking at the bright TV wasn’t the easiest, so I basically just laid on the couch facing the other way and listened to it and turned around to see replays of big plays.

Tuesday, Day 6: Back to the eye doctor to remove the contacts and check in on how the eyes are doing. Getting the contacts out was a bit of a struggle (I still haven’t mastered letting other people touch my eyeballs), but besides that, all was good. During the afternoon it was a struggle to look at the computer for too long, so I had to close up shop for a bit in the afternoon, which from everything I’ve read, is normal.

Wednesday, Day 7: My last day at my parents house. Oh yeah, this whole time I’ve been at my parent’s house because driving isn’t a thing you can do. Shouts to them for nurturing my back to health. Nothing too crazy to report- I drove back to Arlington, and was just super careful about it. Some road signs would be fuzzy, then others would be crisp. Just comes and goes. Strange.

Thursday, Day 8: It’s now been a week since the surgery. My eyes actually kinda stink today, pretty annoying. Keep getting really dry, not sure what that’s about. Might be because my room here is hot and I had my fan on all night. Vision while typing this blog has been iffy, but decent. Really just can’t wait til it’s 100%.

I highly, highlyyyy recommend you go to LASIK Pro in Chevy Chase. They were AMAZING. I suck at everything having to do with eyes and they held my hand (both figuratively and literally) the entire process. They will text and email and talk to you on the phone at any time with any questions you might have.

Here’s me, Dr. P, and LASIK Bear after the surgery 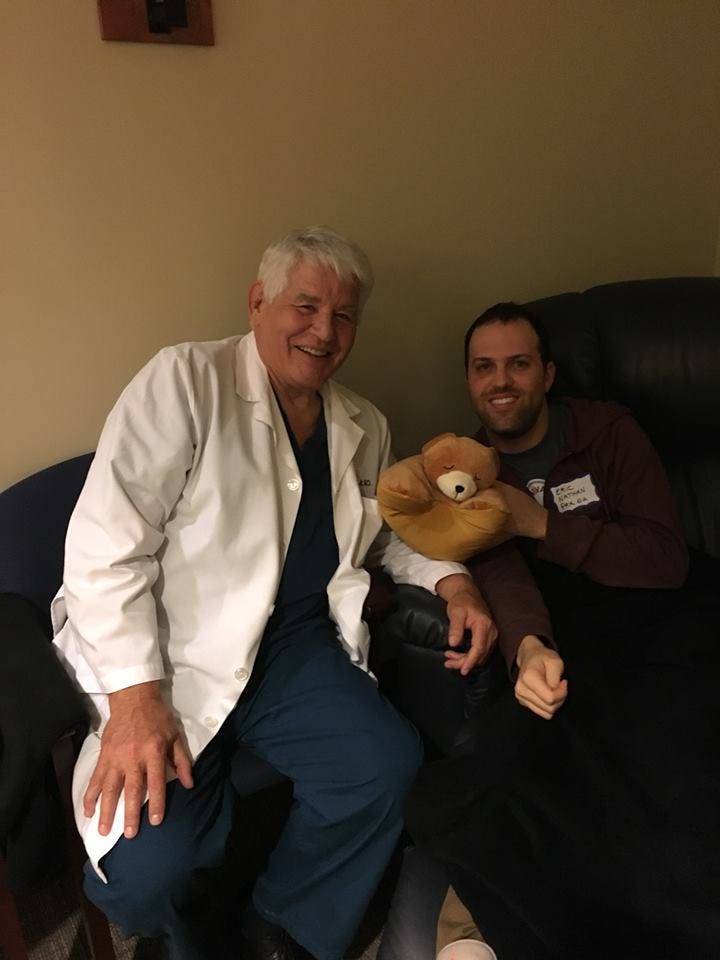 I wonder if he can fix my hairline too?

LASIK/PRK is not only affordable (and insurance will usually cover a piece of it), it’s a miracle too. Like, all of a sudden I can just see. Last week I couldn’t even see the score of a game on the TV from my couch. And I have a big TV. Samsung. It’s great. And now a few zaps later, I can.

If you go to Lasik Pro, they’ll even give you a Barstool discount because that’s just how great they are. If you’ve even considered getting it done, at least go in for a consultation. They have finance plans and all of that if you’re 50/50 on getting it. But I really cannot recommend it enough. Just go see them. Really.

PS: I’m really excited to be the douchey guy at the poker table who wears sunglasses for no reason. I’ve never been able to wear sunglasses at the table, and though you’re a mega-douche if you do, I’ve never gotten to be that mega-douche. Stoked.