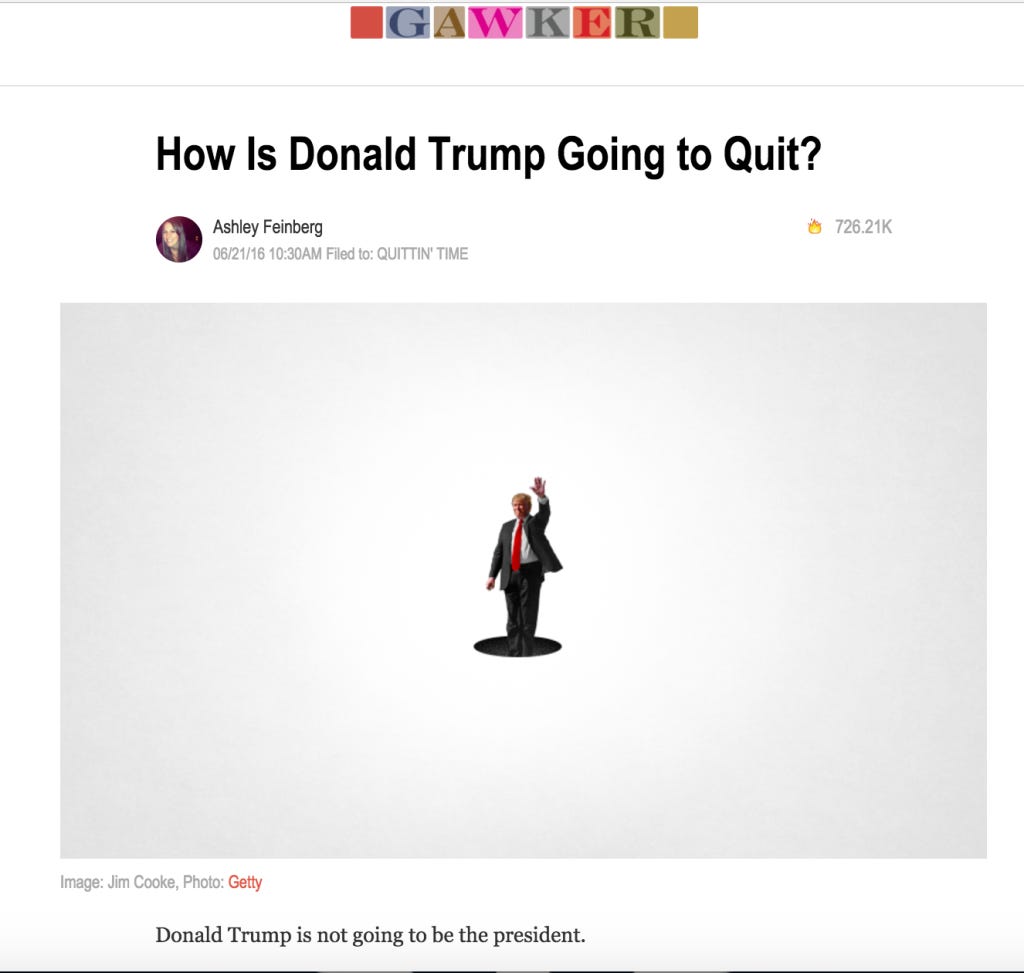 Call me crazy but I’m pretty sure Feitelberg and I wrote the two best post-election blogs on the internet. Which I like to think speaks mostly to our talent, but in reality, speaks a lot towards how AWFUL and one-sided the actual real life media and political pundits had been.

I wrote mine in the aftermath of the election coverage we were doing at the office. Everyone was so wrapped up in the Barstool News Network and our live stream that it never actually hit me that, wow, Trump is actually going to win, in real life. As everyone was packing up I went over to my desk and just started pounding out a blog – kind of therapeutic in a way, just getting out all the shit that had been pissing me off about the way the media had been covering the election. Got in one of those moods where I felt like writing real words instead of quick 1-hitter paragraphs about some viral story and ended up in the office writing until around 3:30 AM. Woke up, proofread everything now that I was sober, and hit publish. Never gotten more compliments on a story. PS fuck Gawker. 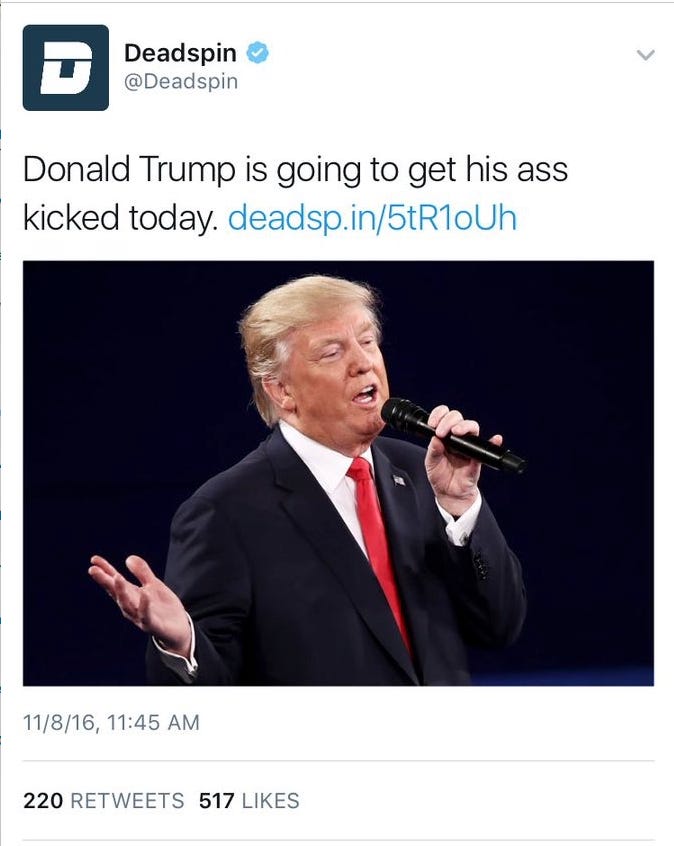 Listen I fucking hate politics. I hate Donald Trump. I hate Hillary Clinton. I hate hardcore Republicans and I hate hardcore Liberals who stick to the system of beliefs they think they’re supposed to have because they fit into their party category on paper and refuse to compromise or find a middle ground on anything. Because almost every issue has a middle ground. Almost every issue has a gray area. Almost every issue has an opposing point of view that somebody holds, somebody who comes from a different background than you and has a different perspective than you and can offer thoughts and viewpoints that maybe you’ve never even considered. Not every issue. But most. And for the most part, at least as long as I’ve been alive, people were at least able to function within those parameters. People fucking hated W., people fucking hated when Obama got elected, and there were lunatic fringes that remained in both of those extremes – but there was always some sort of sane middle area for the rest of us to exist in.

But this entire campaign and election was different. There wasn’t anything in the middle. You were either a scumbag lowlife piece of shit dirtbag Trump supporter, or you were a cocky elitist who was branded the enemy. The past year has basically been a war between the two. The overwhelmingly left wing social media presence that served as a virtual echo chamber, making it seem like everyone on the planet was in agreement that Trump and his supporters were the Devil; and the other side, who dug in deeper and became even more defensive.

And in the end it was the latter that won out. What Twitter convinced you was a scumbag minority actually turned out to be a lot bigger. The cocky, dismissive, arrogant and flat out condescending tone and attitude taken by almost every single major mainstream blog and website turned out to, shockingly, not represent the majority of Americans.

Yes Gawker is the one that comes to mind. But that’s just because I read them the most. Every site – from the NBC News feed to the billions of no-name blogs that threw a party every time they had a chance to score some pageviews by shitting on Trump supporters. It became practically a bloodsport for sites to find some stereotypical dumbass idiot, post them, and use them as a straw man for every single Trump supporter in the country. If you were a Donald Trump supporter – or even if you weren’t, even if you were just a NOT-Hillary supporter – you weren’t just frowned at, or debated. You were publicly shamed and cast as a villain. You were the Worst Person On The Internet. You were flooded by the social media pitchfork mobs until they got sick of you and moved on to the next.

And there were a LOT more pissed off people out there than most of us fully appreciated. Pissed off people who turned on the news and logged on to the internet and 95% of what they saw was snarky dickheads telling them they didn’t matter. Maybe things would have turned out differently if there had been some semblance of balance or even just some acknowledgment of their existence. If people actually took Trump and threat he posed to their system seriously. If people took America’s anger and extreme distrust of the political system seriously. Even for one second.

Or maybe not. Maybe this was coming no matter what. But I do know the effect it had, and that all of the “Fuck You” people out there are feeling pretty good about themselves and the next four years right now.

Feitelberg: All Of The Anti-Trump Protests Across The Country Almost Make Me Happy Trump Won

This was probably a surprising blog coming from someone who spent the entire election cycle, and will most likely spend the next four years, hating and bashing Trump. But the fact of the matter is it was a pretty easy one to write. These people were being fucking idiots. Just like Trump is often being a fucking idiot. I don’t really have “politics.” Folks love to freak out and call me a liberal and say I should write for Buzzfeed but the fact of the matter is I’ve voted republican in any election I’ve ever voted in, this one was a bit different because there was a fucking idiot on the ballot so I just didn’t vote. But it’s pretty easy to simply call em as I see em. These protesters were idiot assholes and Trump is an idiot asshole. I’m sure that blows the mind of people, that someone can just sit here and use their brain independently of those labels everyone likes to slap on their chest. But it’s pretty easy to see that if you take a single step back and asses the situation.

No one’s ever going to mistake me for a Trump supporter or a Trump fan or even a Trump “I don’t think the guy is a piece of shit, maybe he’s alright.” I hate him. I think he’s a fucking racist scumbag with a few sexual assaults under his belt and I think it sucks that he’s the president elect of our country.

Having said that, FUCK these people. Fuck them right to hell. Are you idiots too stupid to see that this is basically the reason Trump got elected? Too dumb to realize that a significant portion of America, enough to get him the electroal votes he needed, are sick of the bellyaching that goes on when you weren’t wronged, things just aren’t happening exactly as you wanted them in your perfect world. I’d ask what you’re even protesting but it’s an insult to protests to call these one. These demonstrations are a bunch of whiny fucking brats who didn’t get their way so now they’re stomping in the aisles at the supermarket and holding their breath until mommy buys them the cereal they want. This isn’t a protest it’s a goddamn temper tantrum. There was a democratic election and you fucking lost, deal with it. Or is that what you’re protesting? Are you protesting democracy and think Hillary should just go fucking chain herself to the White House gate and not agree to shit out the key until they say she can live there?

This is the exact shit that everyone feared would happen if Trump lost. People said he threatened the peaceful transition of power and all that America stands for because he wasn’t sure if he would accept the results of the election. What the fuck are you guys doing? Storming the streets and gathering outside his building with pitchforks and torches. Streets and infrastructure were shut down, there were shootings, flag burnings, violence, and New Orleans even burned the president elect in effigy. Can you IMAGINE if these were Trump supporters rather than Hillary? Democrats would be scared to leave their houses until spring because the people outside with different political views must be violent, dangerous maniacs! Everyone would be talking about how it’s New World Order and Trump’s to blame because of the dialogue he used at his rallies. But this? This is just good people making their voices heard. It’s insanity. You want to protest? Go protest outside the Democratic Party’s HQ and tell them you’re pissed off they gave people a shitty candidate to vote for and ran a shitty campaign and lost to a scumbag.

I hate Trump with a burning passion and I wish to god he wasn’t our president, but I hate these people even more. If you followed Lady Gaga to a cry fest outside Trump Tower last night then fuck you.