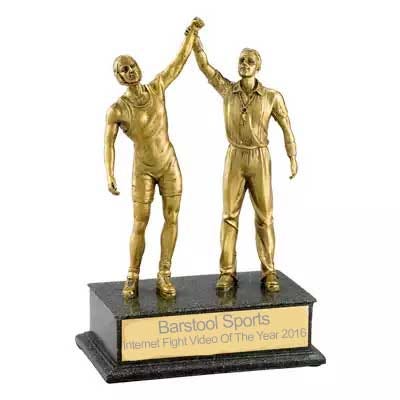 It was a torrid year for internet street fights, most of which were chronicled throughout the year on my Internet Fight Video of the Year rankings. But it’s year-end, our last official blog day of the year, and that means it’s time to give away this very real and not haphazardly Photoshopped trophy (I imagine I’m the dude enthusiastically holding up the winner’s hand) to one lucky miscreant. So let’s get to it right away with your runners up:

HONORABLE MENTION: Girl who went from fisticuffs to a round of bumper cars

For as much of a bad move as it may be to start upgrading from “relatively innocent street fight” to “potential vehicular manslaughter” when in an altercation with other human beings, I kinda don’t hate the move by this chick. You think Sun Tzu would sit there waiting for three giant bitches to beat him down when he’s already lost the upper hand? Of course not. If we were doing a 2016 update to The Art of War, 1) Sun Tzu would be very confused by the rise of digital book publishing 2) The chapter on “Vanquishing the Enemy in a World Star Video” would have something about winning at all costs for the sake of the internet and your reputation.

HONORABLE MENTION: A guy knocking out dudes who cursed out his girlfriend in the best-filmed fight video ever

For as much as I felt like I would hate the guy screaming for an apology, I respect the hell out of what he did here. He’s a total meathead but he’s being chivalrous and he didn’t seem to want to escalate the situation. But those guys started acting tough, hugging and jamming a finger in this guy’s face while refusing to say sorry for being shitheads so he fucking took care of business. That plus “he fucking hit me in the faaaace” guy…it hurts me to not have this make the top 3 but it was as close as close can be.

THIRD PLACE: Big guy with the enlarged heart of a champion

I know, it’s tough to have a fight loser in the final standings when there were so many tough competitors. But I have never seen a man take as much of a beating without landing any good shots, get as much shit talked at him by as many people, be completely punked out and yet I STILL came away thinking that he won the fight. Dude’s exactly like the Undertaker in WWE if the Undertaker wasn’t in good enough shape to do the sitting up thing and if he just got pinned all the time and if he had dangerous type 2 diabetes.

SECOND PLACE: A girl tries a sneak attack and eats the beatdown of a lifetime

Heyyy a little showing for the ladies, girl power! But seriously what a performance. She saw the other girl coming with her sneak attack and then nailed her with a nasty suplex, pummeled the shit out of her while this girl bitched about her hair, kept walking after her and emptying shots while encouraging the girl to beat her ass…I mean my God. Transcendence is what that is. I’m not sold on the other chick being the toughest girl so that’s the one thing I’d dock Babe Ruth a point for, you won’t get by on my watch and win the coveted Spags Internet Fight Of The Year Award by beating tomato cans, no matter how impressive.

AND YOUR WINNER and Internet Fight Video Of The Year for 2016….

Not since the days of watching Kimbo Slice clips on Sublime Directory (in between much browsing of the porn also on there) have I seen a dude look like such a beast who also completely takes all the focus of the camera. That is how you assert your dominance over a group of men. This guy should include this video with his CV and resumé if he applies anywhere; even if they’d worry about his violent streak, they’d be too afraid not to hire and promote him, the real life equivalent of that guy wearing camo whom Elaine promoted out of the mailroom on Seinfeld.

And there you have it, a great win for a great performer. I have to imagine he’s going to want to collect his trophy and, if he does, he should come to Barstool Sports HQ with his baseball bat and feel free to ask for Dave Portnoy. He will definitely be in possession of the trophy and if he isn’t is probably lying about it and should be asked about it with great enthusiasm anyway.

Thanks to all the fighters knowingly or unwittingly took part, here’s wishing all of you a 2017 full of smashed faces.