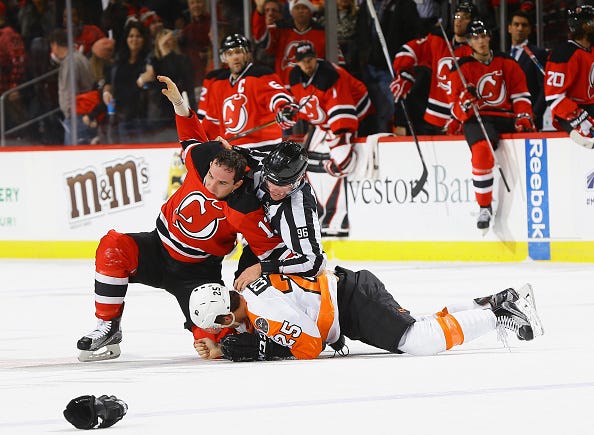 I’m not gonna sugar coat this one at all. That was one of the worst Flyers games of the season. From top to bottom, nobody played well last night. I’d very much like to drink a gallon of spiked egg nog right now and just forget it ever happened. But I know there are plenty of Devils Stoolies here who are thirsty for tears, so I guess it’s time to take some Friday morning lumps.

You had to know heading into last night that this game wasn’t going to go well for the Flyers. The Devils were 2-6-2 in their last 10 games. The Flyers were just coming off an emotional win against Washington the night before. The Devils always find a way to bring out the worst in the Flyers and best case scenario was an overtime loss. Which I’d be perfectly content with. Heading into the holiday break by taking 3 points from the Caps and Devils on a back-to-back would have been perfect. Instead, the Devils came out with some jump in their game and the Flyers looked like your October Philadelphia Flyers. They couldn’t generate shit for offense (aside from that one Raffl scoring chance). They couldn’t generate anything through the neutral zone. And worst of all, they decided to fuck around and play like ass in their own zone.

That’s terrible awareness from Brandon Manning and a bizarre lack of urgency from Claude Giroux right at the faceoff dots. I’ve said this for the past few games now but the Giroux line is terrible in their own zone. They’re constantly trying to be too cute with the puck. Constantly trying too hard to make a play that isn’t there. They’re kind of cursed by their own skill a little. I don’t know what play Giroux was trying to make here, but it wasn’t the right play of just sending it up the boards and out of harms way. 2 giveaways in a row, and the puck ends up in the back of the net. That was the moment you knew this game was over last night.

I blogged about all the extra-curriculars last night. There were a bunch of fights in the 1st period and the game was chippy for the full 60 minutes. You love to see some bad blood finally brewing between the Flyers and Devils again. But the Flyers got way too caught up in it all. I mean, how can you expect to win hockey games when your penalty box looks like this?

Giroux. Simmonds. Gudas. Yeah, it would be nice to have those guys out on the ice. The Flyers were so clearly off their game last night and it was tough to watch. Meanwhile, the Devils wanted it more. Which makes sense with how poorly they’ve been playing lately. Obviously their coach was going to challenge them heading into the game last night, and these are all professional athletes who can respond to that challenge. Credit to the Devils for being able to win the game both on the scoreboard, and the mental game as well. The Flyers have a 5-day break now for the holiday. But in true mailtime fashion, it might as well have been a 6-day break.

P.S. – I really hate this shit from Konecny.

I love that the kid plays with a ton of heart and emotion. But you just lost 4-0. Get off the ice. If you really wanted to yap that much then yap during the game. Not after getting embarrassed. He’s young and he’ll learn when to pick and choose his battles. But nothing is worse than the kid who decides to throw on the muscles after getting his ass kicked.

See ya after the holiday. Can’t wait to yell at all my relatives about Dale Weise at dinner on Sunday.