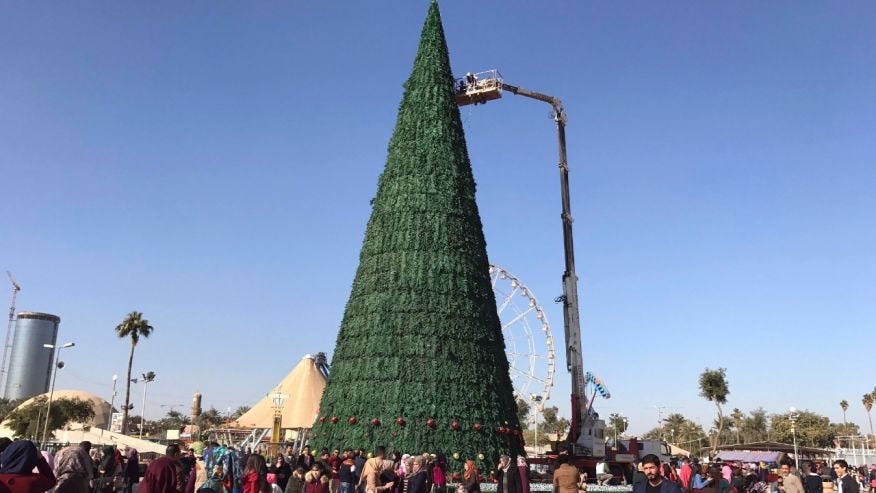 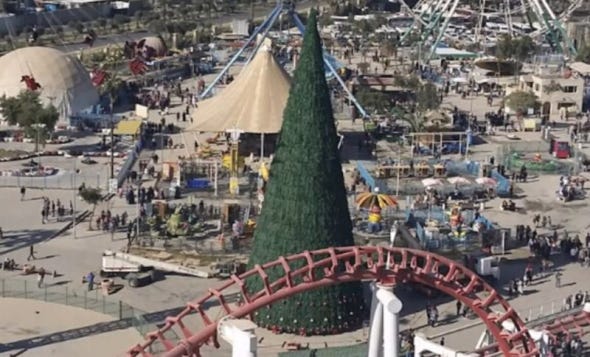 Fox News — An 85-foot-tall artificial Christmas tree stands erected in Baghdad as a symbol of solidarity with Christians this holiday season, says the Muslim businessman who built it.

Yassi Saad said he wanted to put the tallest tree in the Iraqi city with the aim at “joining our Christian brothers in their holiday celebrations and helping Iraqis forget their anguish, especially the war in Mosul.”

The tree, with a diameter of 33 feet, was erected in the center of an amusement part in the Iraqi capital. Saad said the initiative cost around $24,000.

If I’m in Baghdad I’m staying as far as possible away from this motherfucker. Erected a giant Christmas tree in BAGHDAD? FUCKING BAGHDAD!?! Bro they torture the shit out of you for far far less. I think if you even say the word “Christmas” ISIS scoops you up and drops you in a vat of acid. Or they strap you to the top of a massive car bomb and drive you straight into a marketplace. That’s not a joke or funny that’s just a fact. Horrific shit goes on in Iraq and it especially goes on to Christians.

And this guy put up an EIGHTY-FIVE-FOOT-TALL Christmas Tree right in the middle of Baghdad? God bless him. And Portnoy thought he showed some balls with his 9-foot menorah. Talk to me when you’ve put yourself and your family and anyone that’s ever come into contact with you ever in jeopardy by taunting all the terrorists with a giant Christmas tree in the capital of Iraq. Unreal move but nobody go anywhere near Yassi Saad for any reason whatsoever ever for the rest of time.