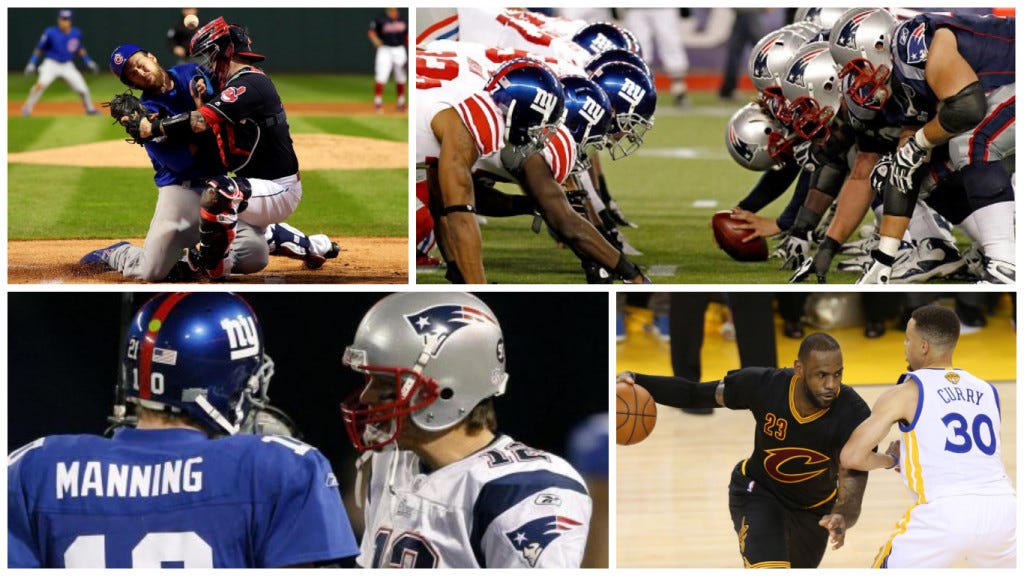 For the last two weeks, the most discussed game in the NFL has been a hypothetical one: What if this is a repeat of 2007 and 2011 and the Giants are catching fire at the exact right time while the Patriots churn on with their usual dominance, setting up a third showdown between the Boston and New York franchises? For Patriots fans, this game represents a chance at salvation and Armageddon all at once. For Giants fans, a third win over the Patriots would be the only thing that could possibly top 18-1. And for casual NFL fans, it would be the most hyped and dramatic Super Bowl matchup since…well since the last time the Patriots and Giants played.

But would it be the biggest game of the past year, and by year I mean by the 365 days since the last Super Bowl? Well, *Uncle Chaps voice* it’s hard to say. 2016 was a terrific sports year. Almost every championship game was unusually dramatic in a memorable way with beyond-usual high stakes. Would Pats-Giants 3.0 top them all? I think there are two other games that would have arguments.

Cleveland-Golden State Game 7 was a game that had historical implications on the lines for both sides. For the Warriors, it was their chance to become the winningest team in NBA history and pass the ’96 Bulls on paper (which only their fans would’ve believed but still). It also would’ve validated their douchey Silicon Valley ownership and legions of drooling fanboy media members and Twitter-obsessed basketbloggers that Golden State has somehow “solved” basketball and reached the platonic ideal of the sport. For Lebron, it was the most polarizing and famous athlete of his generation’s chance to finally stuff it in the face of his millions of haters, deliver a title to the most depressed sports city on Earth and fulfill the destiny that everyone put on him since he was in high school.

Cubs-Indians has it’s own arguments though. The Cubs drought was one of the last great American sports stories and needs no further explanation. If the Indians won, their trade for Andrew Miller would’ve become a legendary deal. And most importantly, it finally would get everyone to shut the fuck up about the Warriors blowing the 3-1 lead in the finals which was the most poorly used meme on social media other than that annoying kid who always tweets about how Eli Manning has two Super Bowl MVPs.

Both of them were huge. Would Patriots-Giants be even bigger? I can’t answer that objectively. The Giants winning Super Bowl 42 was the best moment of my life and it isn’t even close. I can already tell you the Giants beating the Patriots a third time would be more joyous for me than the birth of my first child. So I’ll let you, the reader who in no way will be similarly biased because it’s not like the lions share of Barstool’s readership comes from Massachusetts and New York answer instead. Vote below: