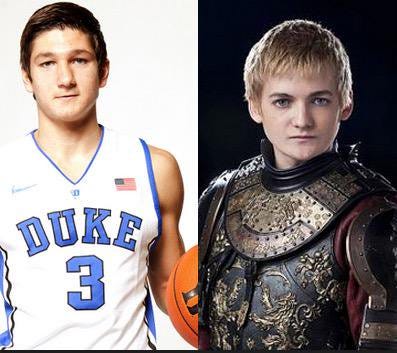 By now everyone has see Tripgate 3 from Grayson Allen AKA Graymond Green. And even more than the 3rd nationally televised trip, it was Grayson’s reaction that has people talking. The buzz floating around the college basketball world last night and today is “Is Grayson Allen suffering from mental illness???” Gimme a goddam break. Could we be any more dramatic?

I mean don’t get me wrong I see where people are coming from. Grayson Allen seems like the type of kid who put cats in microwaves in high school. Like the really intense weirdo that scares all his classmates. And between the rage on the bench and then fucking crying in the locker room last night, that is like textbook manic depression. But can we all relax with the psychoanalysis?? Can we stop pretending to be Freud or Carl Jung? Grayson Allen is just a plain old asshole. He suffers from a mental illness called “acting like a dickhead.” His name is Grayson, for fucks sake. Almost impossible to not act like a spoiled entitled brat. Everyone who ever played basketball on any level has run into a kid like Grayson Allen. He’s got a wild temper and acts impulsively on the court. Plays dirty and snaps a little bit in the heat of the moment during games but ultimately isn’t a tough guy so he apologizes afterwards. The type of kid who grew up living at the end of a cul de sac always getting what he wanted and when a call didn’t go his way or he got beat on a play and got embarrassed on the court, he flipped out on coaches and refs and teammates. Hes the guy who presses reset on the Nintendo when its clear hes going to lose. The kid who screams at his mom in public in front of his friends and makes it painfully awkward.

Grayson Allen may take it to the extreme but it’s nothing that we all haven’t seen before. He’s a dick who can’t control his emotions when he doesn’t get his way. A baby inside a 6’5 All American’s body. Spare me the mental illness nonsense. He’s Joffrey Baratheon and I hope someone poisons him.