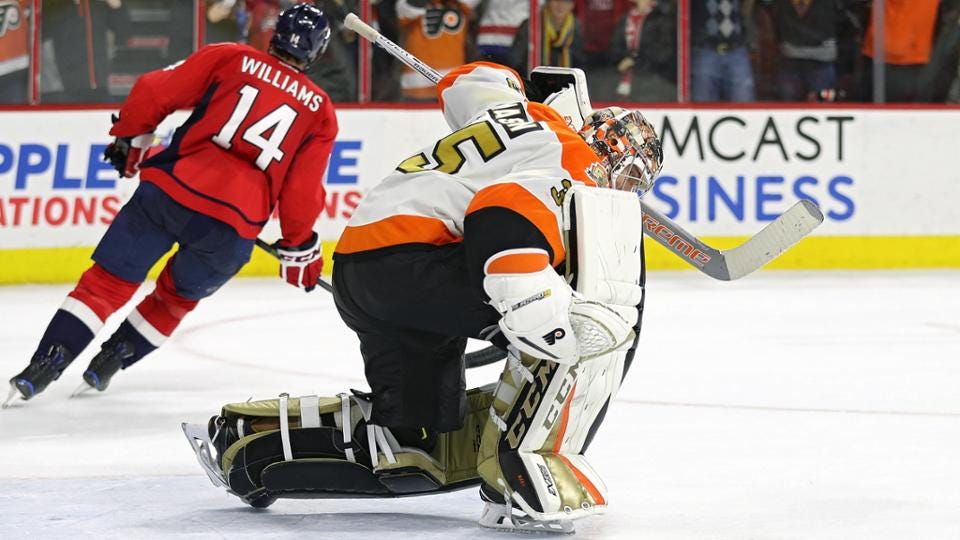 First off… THAT’S how you write a headline.

Second off, the Flyers continue to be in the holiday spirit and this Christmas and continue to give us all some free hockey to watch every night. The game on Monday night against Nashville went to a shootout, and then last night they managed to squeak by the Caps in the shootout thanks to Steve Mason and this filthy little move from Weezy.

Now to be perfectly honest, it took awhile for last night’s game to feel like it had anything close to a playoff atmosphere. I’m not sure if that’s because each team is just trying to play it safe heading into the holiday break. Maybe every team in the Metro is playing so well that they don’t want to do anything different to throw them off their game. Or maybe there’s just not as much bad blood between the Flyers and Caps right now. But it wasn’t until this Claude Giroux goal that the juices really started to get flowing.

That’s just vintage Claude. Steps up at a crucial moment in the game, drags his balls across the table and snipes one home with authority. Bar diz. Big moment in a big game against a big opponent. That’s when you need the guy with the ‘C’ on his sweater to lead the way, and that’s what Giroux does. There were times last night when I was Googling “Ovechkin injury” because I forgot he was even on the ice. But not Claude. And shoutout to 19-year-old Ivan Provorov for reading that play and having the sense to jump up on that break. Without Provorov there, the play probably dies in the neutral zone and the Flyers head into intermission down 2-1.

Quick Sidenote: Mike Milbury mentioned after the game last night that Ivan Provorov has a Norris Trophy in his future. And I’ve been shook about it ever since. I knew it was too good to be true. I knew that something or someone was going to come in here and ruin Provorov for me. Now I guess I just have to sit by and watch what happens to ruin his career. Maybe he’ll end up in the KHL or something.

Who Forgot To Pay The PECO Bill This Week?

Remember when the Flyers were automatic on the powerplay in the middle of their 10-game win streak? Remember when taking a penalty against the Flyers was essentially a suicide mission? Well that’s now 5 games in a row in which the Flyers haven’t been able to take advantage of the powerplay. And it’s pretty much been the same story ever since Colorado. Here’s what I said after that game.

Rough night for the powerplay last night and I think we’ll see more teams go with that max-aggressive penalty kill that Colorado was going with. If you let the Flyers powerplay set up against you, then you’re dead. It’s risky to go on the all-out attack mode like the Avs were in last night but clearly it worked. So now the Flyers have to figure out how to combat that since they’ll be seeing it a lot more often.

As long as teams are able to limit their penalties against the Flyers so the PK unit has enough in the tank to at least chase the Flyers’ top powerplay unit, then they can shut it down pretty easily. It takes the Flyers too long to get set up in their powerplay. They’re great once everybody is in place and they can work the puck around a bit. But dumping the puck deep, retrieving on the forecheck and then controlling possession is something they struggle with against an aggressive kill. So yeah, they might want to figure that out.

Steve Mason is 8-1-1 in the month of December. I know that consistency has always been his biggest issue here in Philadelphia. He’ll go on a heater, get everybody’s hopes up and then come crazing back down to reality. But that’s a month of work there. 8-1-1. He’ll probably sit tonight for Stolie, then the holiday break, and then go against St. Louis and San Jose to close out the month. But clearly something has changed for the guy. He mentioned in the post-game interview that being a father really helped change his perspective on how he approaches the game, but I think he just wanted to brag about how much he has sex. Obviously it has everything to do with not having a 2-goalie carousel in Philly any more with Neuvirth’s injury. We’ve been saying that since day 1 when Neuvirth went down but you can’t understate how important that was for Mase. He’s always had the physical part of his game down. I mean, aside from being injury prone. But people forget that he won the Calder Trophy and was nominated as a Vezina candidate in his rookie season. It’s just been the mental aspect that has always fucked with him. Now that he’s comfortable in between the pipes and doesn’t have to worry about one bad start landing him on the bench for 3 straight games, it’s a whole new guy back there for the Flyers. He may not be a Vezina candidate but his name should at least get mentioned when you bring up the Hart conversations.

– Michael Raffl continues to make Ron Hextall look like a genius for that contract extension last season. 7 goals on the season so far. Not exactly a point scoring machine but he’s a great complimentary guy for Giroux and Voracek on that top line.

– I’m really starting to love Roman Lyubimov’s game. Plays with a ton of energy and he might be the only forward in the league right now who is consistently taking slapshots. It’s a dying art but Lubby loves to clap away. It’ll be interesting to see how Hakstol uses him once Couturier and Read are back in the lineup. I think he’s done enough over the course of the last few weeks to keep him in the lineup and consider scratching VandeVelde and Weise. Dale Weise, man… Hopefully Vegas hasn’t been watching the Flyers this year and take him in the expansion draft just because they recognize the name.

That’s 11 wins in their last 13 games and they’ve gotten points in 12 of them. I told myself heading into this back-to-back against Washington and New Jersey that 3 points is what I’d need to be comfortable with where they’re at before the holiday break. Anything besides a regulation loss tonight against Jersey and I’ll be happy. Now we’re having fun.