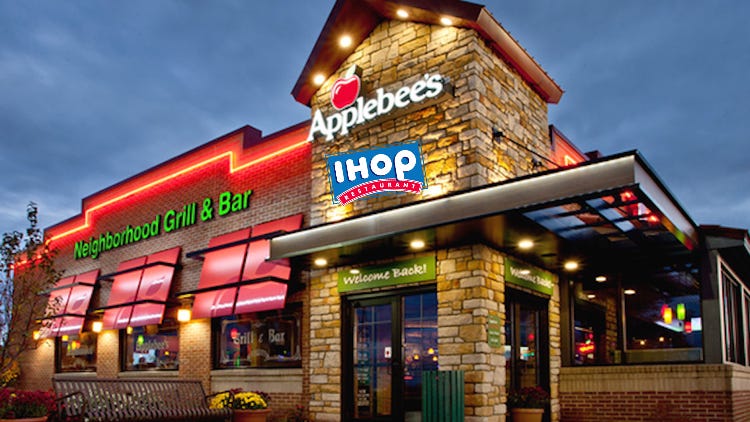 Detroit Free Press- The world’s first combination IHOP and Applebee’s restaurant will happen next year in downtown Detroit. The 300-seat gastronomic experiment will be located inside the Millender Center, across from the Renaissance Center, and be oriented to serving guests in nearby hotels as well as downtown visitors, office workers and residents. Sources said Wednesday that the co-branded restaurant’s menu is still being developed, and it’s not yet known whether guests could order IHOP pancakes and omelets throughout the day, alongside plates of Applebee’s boneless wings and Fiesta Lime Chicken.

The 12,000-square-foot restaurant would replace the former Sweet Lorraine’s cafe and be a franchise of TEAM Schostak Family Restaurants. It is expected to open in late 2017 and employ more than 100 people. The restaurant will feature a coffee bar and Detroit-centric interior design, Executive Chairman Mark Schostak said. “This is the first IHOP/Applebee’s combo that’s ever been built anywhere,” Schostak said. The Schostak company “is proud to expand our portfolio by uniquely combining two nationally recognized and family-oriented brands.”

DEEEEEETROIT CHAIN RESTAURANTSSSSSS!!! What an unbelievable news story to pop up out of the blue today with no warning at all. I remember a few years ago when a fresh faced, bright eyed young blogger went up to Detroit to save it with revolutionary ideas like combining a firetruck and an ambulance to save money and lives with a vehicle called the frambulance. The ideas were not implemented and the city was not saved. But I think we can officially say that Detroit is officially on the right path now thanks to the idea of combining two great things. So I think Detroit owes our pal Big Cat an internet h/t for this one.

Now I’m not much of an urban planning guy or know how economics work. But everything I know as a sports fan tells me that this is going to turn Detroit into the world’s next boom town. You know how they say an arena will bring more people downtown to spend money at restaurants and bars? Well that’s the case with this Megapower restaurant. It’s not often you can get drunk at a restaurant at night and then go back to the same restaurant the next morning and soak up your hangover with pancakes and greasy eggs. The money will just pump into downtown Detroit as people suck on the proverbial teet of this restaurant for all their culinary needs. Plus can you imagine some of the combinations that can get ordered at any time of day? Pancakes for mom, boneless buffalo wings for dad, and of course a basket of chips for the entire table with impeccable ambience and decor. How American is that? I’ve never felt more freedom in my life than the thought of this restaurant. Detroit needs to be great again in order to make America great again. And I think we can all agree the Motor City is roaring back in the 4th quarter like a certain silver and blue team led by Matt Stafford simply due to the mere whispers of this superrestaurant.