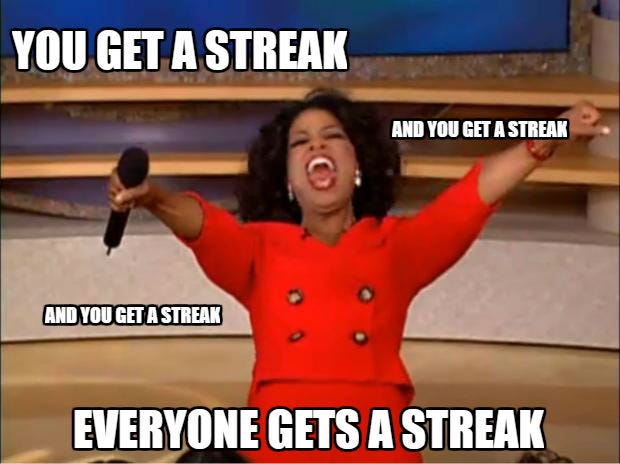 Last week the Philadelphia Flyers were riding high on their 10 game win streak. Thought maybe they had something special going on but as it turns out, win streaks are just the hot new trend in the streets these days. Because at the same time the Flyers were on their 10 game streak, the Penguins had a 7-game streak going. The Capitals had a little streak of their own going. The Columbus Blue Jackets were streaking and they’re still streaking now after winning their 10th game in a row last night at home vs Los Angeles. That’s two 10-game win streaks in the league this year. And not only just this year, but within a week of each other. So let’s talk about the Blue Jackets to start because they’re the most interesting team in the league right now.

Are The Blue Jackets For Real? 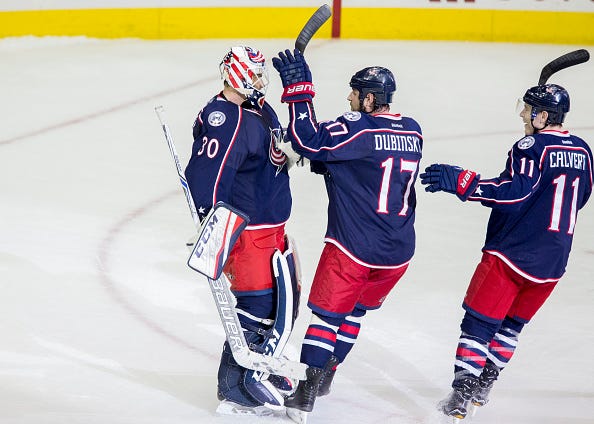 “Are they for real” is the question that pretty much everybody in the hockey world has been asking recently. And the answer is yes. The Columbus Blue Jackets are a real ice hockey team that consist of real ice hockey players that is staffed with real coaches and plays in a real league. They are not some make believe fictional team. The question gets a little more complicated, however, when you ask if they are legitimate contenders. 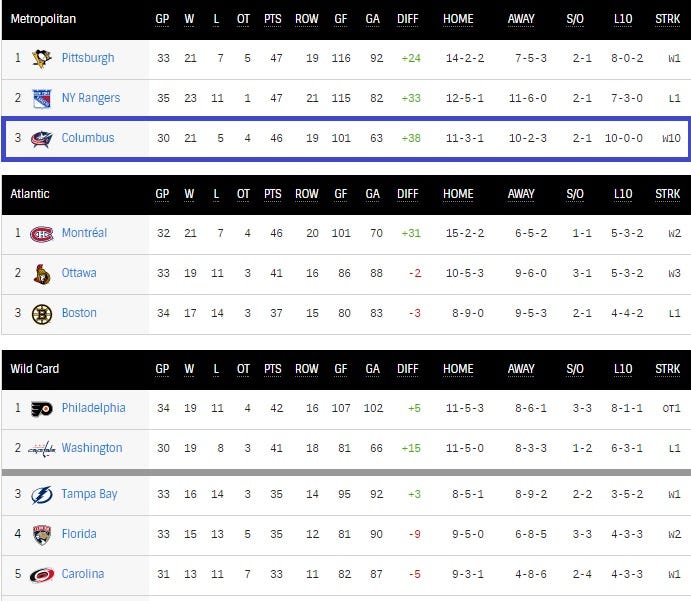 At this point in the season, you have to imagine it’s a lock for the Blue Jackets to make the playoffs. Columbus and Washington have both played the fewest games in the league so far this season with 30 a piece. The Blue Jackets are 4th in the league right now despite playing the fewest amount of games. The Metro has obviously been wild this season so there’s a chance they get bumped to a wild card spot before the season is over. But they have 11 points AND 3 games in hand on the Lightning and Panthers. So yes, I think by starting off the season at 21-5-4 is enough to carry them through the rest of the year. Especially considering they have 6 players with 20+ points right now and Bobrovsky who has the talent to carry a team deep into the playoffs. They are getting help from all over the ice so it’s not like losing one guy to injury (aside from Bobrovsky) could ruin their season.

But then there’s a thought process that because the Blue Jackets have played the fewest amount of games this season, that they’ll start to fall back to reality once their schedule tightens up down the stretch and they have to fit more games in than everybody else. Which is a completely justifiable thought process until you look at what the Blue Jackets schedule has looked like already. They’ve played 7 back-to-backs already and have their 8th coming up right before Christmas with Pittsburgh tomorrow and Montreal on Friday. So it’s not like this team hasn’t had to play on short rest at all this season. It’s just they have this clusters of games at a time and then have 3-4 days off in between.

So again–the Blue Jackets have build themselves a cushion right now that seems like enough to keep them in playoff contention through the rest of the season. I know there’s plenty of hockey left to be played but unless Bobrovsky goes down and they have a total meltdown like Montreal last year, they should be a playoff team. And the thing that separates them from the 2015-16 Canadiens are how much guys on the roster are contributing. Atkinson, Wennberg, Saad, Gagner, Foligno, and Weresnki all have 20+. Hartnell is still pitching in with some assists. They haven’t gotten Boone Jenner going yet but if he flips the switch, then there’s nothing to worry about for this team. Which drives me nuts as a Flyers fan but I’d by lying if I said they weren’t fun to watch.

Things Are Getting Wild In The West 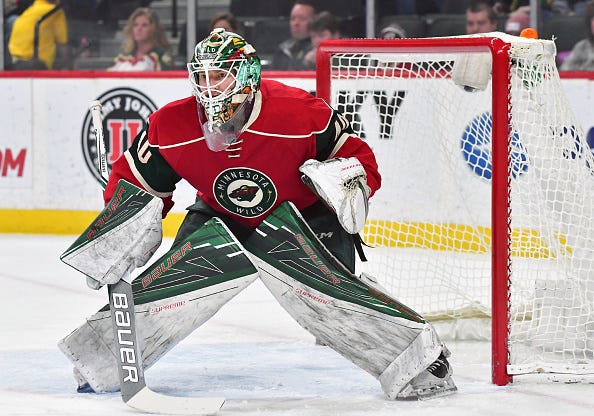 Out west you have the Minnesota Wild currently on an 8-game win streak after blanking Colorado last night 2-0. That was Devan Dubnyk’s league leading 5th shutout of the season and he also leads the league in Save% currently with .948. I mentioned this before in a blog a few weeks ago but Dubnyk is putting together a Vezina-caliber year which is crazy to think about considering where he was at as a goaltender just a few years ago. He was stuck on some shitty teams in Edmonton to start his career in the NHL. Then he gets dealt to Nashville for a cup of coffee. Then he moves to Arizona for a hot second. Looks like his career is heading down a path where he’s traded at the deadline every year for a 5th round conditional draft pick. But then something happened once he got to Minnesota and now he’s one of the top goalies in the league. Pretty incredible turnaround for the guy and now he’s got the Minnesota Wild in some pretty solid position here right before the Christmas break. 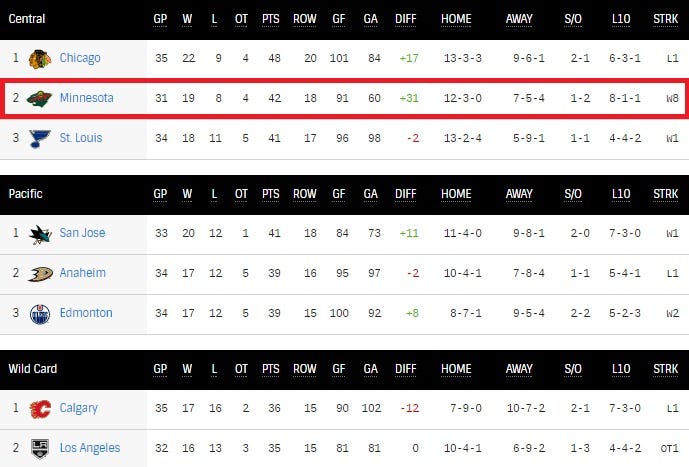 Again, it’s the team in the conference with the least amount of games played that is going on a bender. Now I will admit that having to play more games down the stretch than the rest of the conference is going to hurt a team in the West more than it would a team in the Eastern conference. That travel schedule is tough and they have 12 games in February which also includes their bye week. So 12 games in the shortest month of the year with a 5-day bye week already blocked in there. Luckily it’s 8 home games in a row between the 8th and 27th but that schedule is still tough. So yeah, maybe scheduling will come back to bite the Wild in the ass down the stretch but that can also get them in the playoff mindset heading into the end of the regular season.

Now we already talked about how Devan Dubnyk resurrected his career in Minnesota, but how about Eric Staal? 10 goals and 25 points so far this season for Eric Staal who leads the Wild in points. Last year he was a deadline move to the New York and it just never clicked. I think anybody would have a brain realized that move wasn’t going to work out for Staal or the Rangers. So then Minnesota signs him to a 3-year deal worth $3.5 million AAV in the offseason. The money isn’t too bad but after it seemed like he lost a step with New York, everybody kind of laughed at the term on that one. Now he has 25 points in 31 games and that contract looks like a steal. Good ol’ American boy Charlie Coyle has 23 points on the year. I feel like Mikael Granlund still hasn’t found that final gear to switch into but he has 21 points now. Parise has been struggling a bit this year but he’s also missed some time with injury/illness. So this team, like Columbus, is getting plenty of help from a lot of different guys. So I like the Wild to stay in one of those top 3 spots in the Central and considering how open the West looks like year, they can go as far as Dubnyk takes them.

One last note on the Wild. 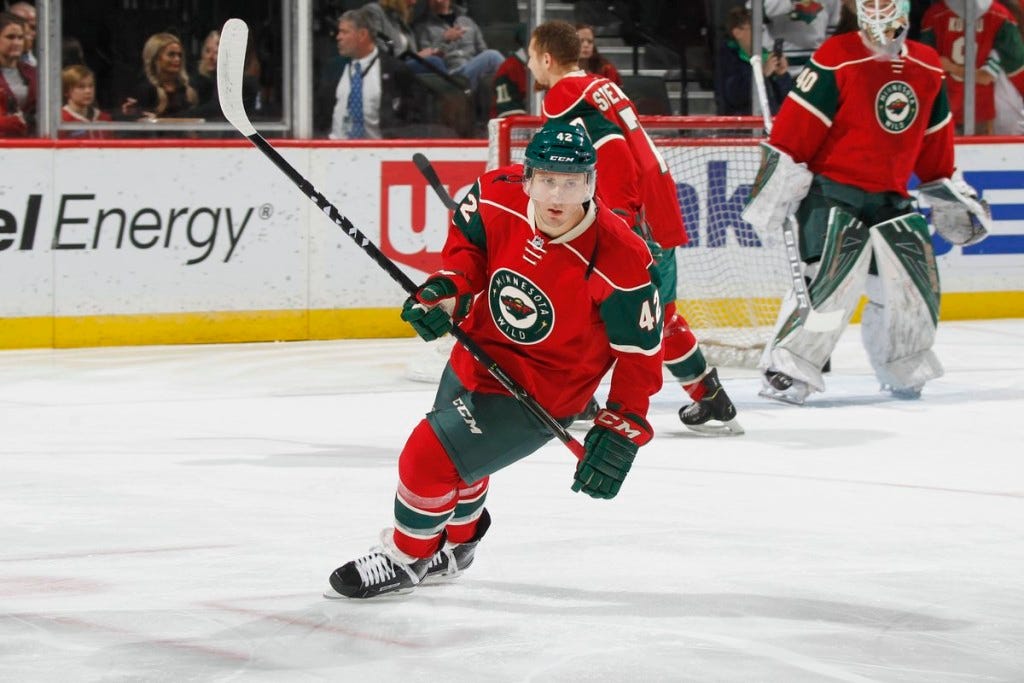 Last night 30-year-old Pat Cannone made his NHL debut. Becoming the 2nd oldest player in league history to make their debut. Guy’s been grinding it out in the AHL for years now so it’s great to see him finally get the payoff after keeping the dream alive for so long.