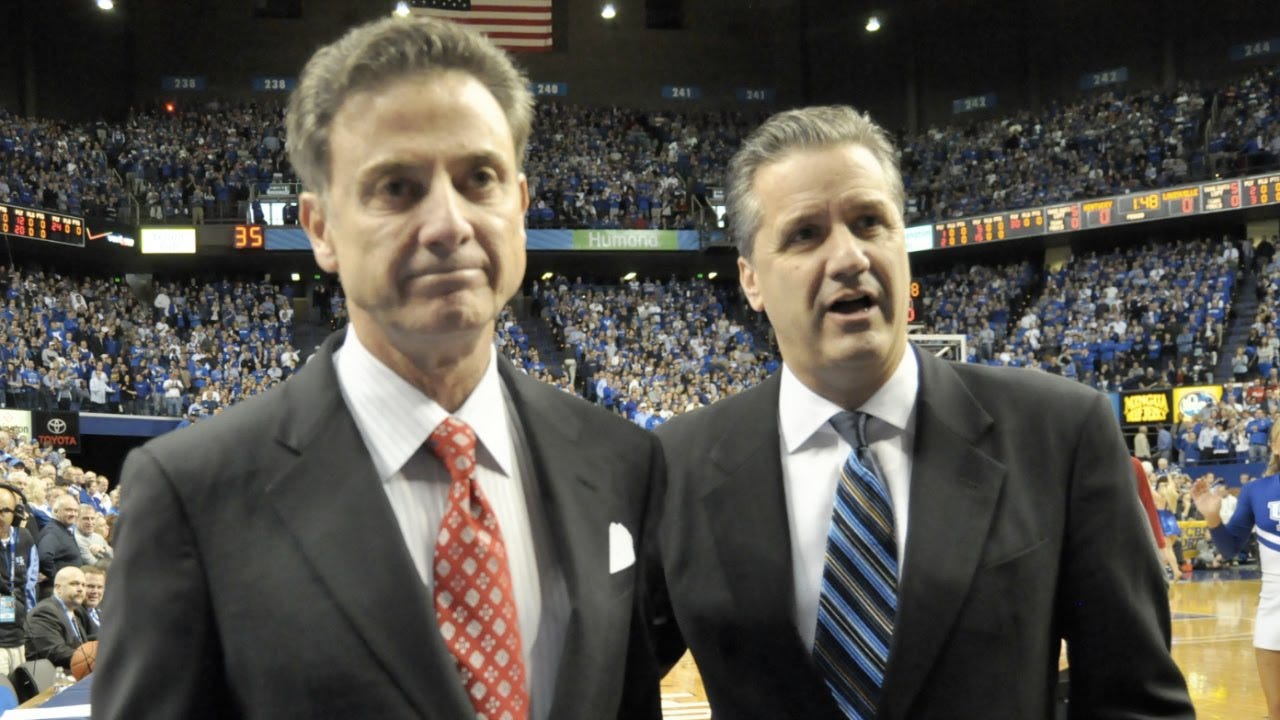 Duke/UNC is the most storied rivalry in college basketball. However, when it comes to pure hate, nothing matches the Kentucky/Louisville game. We get that game tonight, a little earlier than normal due to Louisville playing Indiana on New Year’s Eve. The coaches hate each other. The fans fight in dialysis centers. There’s been fights on the floor between players. It’s beautiful.

Both teams rank in the top-11 in both polls and top-8 in KenPom and with it being the most notable college game tonight, it will get a ton of fanfare. Besides the change of date, the other major difference this year is the style of play between the teams. Louisville still wants to ugly the game up defensively and relies on that for offense. Kentucky on the other hand, wants to run – something that’s not typical with Cal teams – and has struggled defensively. They prefer to beat you by scoring 100 points rather than winning in the 50s.

Kentucky has absolutely dominated the series, especially since Calipari became the head coach. They’ve won the last four meetings and eight of the last nine, with the only loss coming the year Kentucky made the NIT. The line opened for this game with Louisville -2 and it’s already down to a pick in some spots.

Already today a certain programming that has been trying to mimic PMT recently had Rick Pitino on, who was trying to call out the Louisville fans. He called them similar to pro fans in the sense that they are great when the team is good. It was nothing but a ploy to make sure Kentucky fans don’t get into the Yum! Center tonight. While previewing the game he also said he’d take De’Aaron Fox No. 1 overall in the NBA Draft and Malik Monk in the top-4.

Here are the things to watch for in tonight’s game:

– Louisville has to slow down De’Aaron Fox. Everyone is all over Malik Monk right now – and rightfully so – after his 47 point showing against Carolina. But, it’s Fox that makes that Kentucky offense go. His ability to take over the game scoring (he also had 24 points against UNC) or distributing makes him one of the best point guards in the country.

– Speaking of slowing down Fox, Pitino is going to have to get creative with his press. Fox may be the fastest player in the country with the ball in his hands and with the three-guard lineup, that press will be easier to break for Kentucky. Louisville should run more ¾ look or trap in the ½ court. Hell, I wouldn’t be surprised if we see Pitino get real junky and run a triangle-and-2 on Monk and Fox. I do expect to see some ½ court zone with a heavy shade on Monk.

– Pitino is a Hall of Fame coach and one of the five best coaches in the game right now. That’s why I think he’s absolutely bluffing when he said earlier this week that Louisville won’t slow it down against Kentucky. That’s not how you beat this team. UCLA was able to do it because they are arguably the best offensive team in the country. Louisville is not that. Louisville struggles to score. As Rob Dauster from NBC Sports pointed out the three best perimeter players for Louisville are shooting under 37.5% from the floor this year.

– Kentucky has to keep Louisville off the glass, similar to the Carolina game. The Wildcats were able to hold the Tar Heels to 10 offensive rebounds, which was huge. Kentucky struggles giving up offensive rebounds. If you can’t score from the outside, you attack the glass and get second chance points. Guys like Jaylen Johnson, Mangok Mathiang and Ray Spalding are all strong offensive rebounders.

– Kentucky needs a strong game from Derek Willis and/or Wenyen Gabriel. The two combine to play the four spot for the Wildcats and both struggle on one side of the ball. Willis might be the worst defensive player I’ve seen for Kentucky since Calipari took over – yes, even worse than Kyle Wiltjer was. He’s constantly out of place, not aggressive when going for rebounds and is too flat-footed when guarding the ball. Gabriel on the other hand is a work in progress offensively. He’s still very raw, scores around the rim but struggles to consistently shoot the ball. However, Willis hasn’t been there offensively this year. He’s shooting just 36% from three and hasn’t looked for his shot. They need both of these guys to thrive on what they are good at. Otherwise, those minutes should go to Mychal Mulder and Kentucky would go small or you move Bam to the four spot and bring in Isaac Humphries and go big.

– It’s more of a curiosity thing, but I want to see how Monk comes out to start the game. He’s been awesome in big games this year, but he can press a little bit. There’s no doubt Cal will run a set for him in the first three possessions, but I want to see how Monk looks for a shot. He’s strong at pulling up off the dribble along with being a catch-and-shoot guy. Personally I’d like to see him get two plays designed. The first would be coming off a screen for Fox to drive and kick to him. The second would be setting up a double screen with Monk having the ball.

– Donovan Mitchell needs to be the guy everyone thought he was going to be this season. He’s been decent, don’t get me wrong. But, everyone thought he was the breakout candidate (hello, Luke Kennard) this season. If he can start hitting some outside shots, it makes his game that more complete. If he doesn’t have a good game, Louisville will struggle against Kentucky’s perimeter defense.

– Watch how the refs call the game. I hope they let them play and there’s a flow. But, if it’s called tight, Kentucky will benefit. They are a better free throw shooting team and slightly deeper. On top of that Louisville’s defense is predicated on bumping in the lane, checking you whenever they can and overall physical play. This UK team is more finesse.

Pick: It’s the first true road game for Kentucky this year, which is saying a lot. Under Calipari they are 2-5 in those first road games, with the wins coming at Indiana in 2008 and at Louisville in 2014. I’m taking Kentucky to win by 3 here. I think refs will look to keep it tight, which again benefits the Wildcats. On top of that, Kentucky is a horrendous matchup for Louisville. The Cards matchup better against teams like Purdue and Baylor, who want to slow it down. If Louisville truly tries to make this an uptempo game, they are playing right into Kentucky’s hands. This time De’Aaron Fox will be the star for Kentucky while I think Ray Spalding has a strong game for Louisville.

Bonus Hype Video: I haven’t seen Louisville’s yet. But here’s the one Kentucky put out: