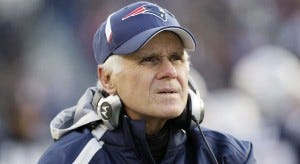 There’s just something about Dante Scarnecchia’s story this year that just gets to me. Something I can’t quite put my finger on. An older, respected gentlemen and a genuine badass who can relate to the young guys walks away from the empire he helped build in 2014, only to come back two years later to the scene of his former glory to make it bigger and better than ever?

I don’t know why exactly, but that speaks to me somehow.

On a team where Bill Belichick and Tom Brady exist, it would be ridiculous to call anybody else the most important or the most valuable man on the Patriots. But since I need to put some kind of superlative on what Scarnecchia is doing, how about if I call his return the most significant story of the 2016 Pats? Or to put it more simply, Man of the Year.

Consider the mood we were all in 11 months ago after that AFC championship game in Denver. Sifting through the smoking wreckage to find the black box, and all the data pointed to the fatally flawed offensive line. The advanced stats had Brady pressured on an incomprehensible 49 percent of his throws. He dropped back 60 times in all, was sacked four times and hit 23, or 38.3 percent. And this was in the aftermath of a Week 17 game in Miami where the Pats had 70 rushes for a pathetic 2.6 YPA. It was so bad that for the first time in my Draft Geek life, Pats fans weren’t saying they wanted [opens Cliche’ Generator app] a wideout who’ll “take the top off of the defense” or a speedy edge rush specialist who’ll “get after the quarterback.” Everyone agreed the top priority wasn’t some sexy pick, but the O-line, which is like an a 8-year-old asking Santa for clothes.

The five starters in that game – Vollmer, Kline, Stork, Mason and Cannon – were the cards Scarnecchia was dealt coming out of retirement and asked to build a winning pot with. And as we sit here 14 games into the season, he’s sitting behind stacks of High Society. He discarded Kline and Stork. Vollmer got injured and is probably done for good. And has settled on a unit of five full time, every down starters of Solder, Thuney, Andrews, Mason and Cannon that is playing like a full house that seemed impossible last winter.

Consider Von Miller, who in the title game rushed Brady at will, to the tune of 2.5 sacks and spent more time across the Patriots line than the referee. And yet Sunday he was a complete non-factor. As were Aaron Donald a couple of weeks ago and J.J. Watt early in the year. Scarnecchia has been the Professor Dumbledore who threw an invisibility cloak over at least three members of 2016’s All Pro Front-7. But don’t take my word for it. Here is the Scar Factor in numbers (All 2016 stats through 14 games. Der.):

–Commitment to Running the Ball:

–Commitment to Running the Ball with LeGarrette Blount

Bear in mind that this is all coming 34 years after Scar was first brought to New England by Ron Meyer, one of the scummiest weasels ever to disgrace the Patriots sidelines. (And that is saying something.) But he clearly got this one hire right. And all this serves to prove what one aging, strong-willed, hard-working, profane, talented, ruggedly-attractive tough guy can accomplish in what’s supposed to be a young man’s game. Welcome back to the Patriots, Very Old Balls.