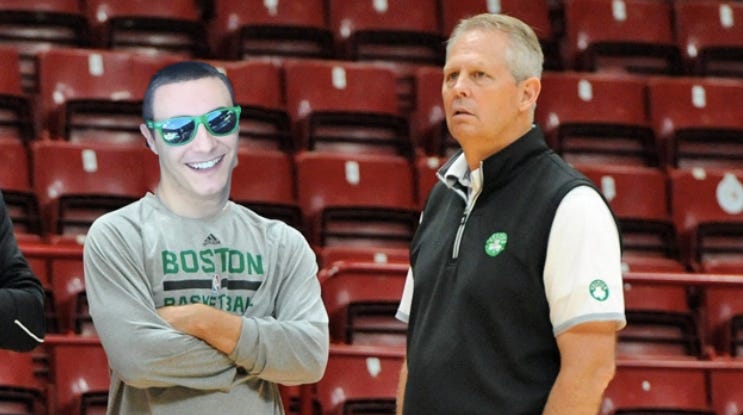 A year ago to the day I wrote this blog. You can’t see the comments now, but it was filled with compliments and praise and definitely wasn’t a place where internet strangers called me names or made fun of my basketball intelligence. Well, here we are 365 days later, and to my disappointment, none of those trades happened. No other trades happened either. Perhaps Ainge didn’t like any of my ideas last year, but that in no way is going to stop me from giving him #My2Cents again this trade season. If you missed last year’s blog, here are the ground rules:

1. ESPN Trade Machine doesn’t allow you to add picks (that I could find), so I’ll be adding them to each trade so things make a bit more sense

2. I broke these down into a couple of sections. Trades that make actual sense and they should really do, outrageous pipe dream ones, and finally, trades for each of the Barstool cities.

3. If you disagree with my proposals, run a couple of your own and we can chat about it on the Twitter machine or maybe in a certain Saturday franchise you can find every Saturday here on this fine website.

Got it? OK good. Grab a seat Danny, turn off your cellphone (but keep the burner on for any potential deals), and let’s talk trades 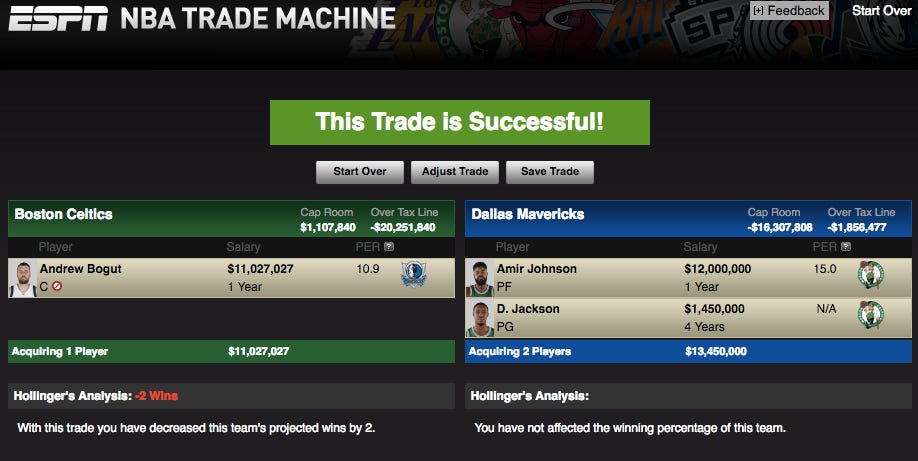 Why the Celtics should do this: Anyone with a brain knows the biggest need the Celtics have is in their frontcourt. They need rebounding/low post defense more than anyone needs anything on this planet. Bogut makes sense for a variety of reasons, almost too much sense. Offensively, he’s been in decline for the last four years. Some might find that discouraging, but I love it. This means he in no ways expects to get the ball on offense, perfect. The stat that I care about, is his rebounding has stayed legit. He’s back up to 10rpg this year in his 25 minutes, and when he gets over that number of minutes, he usually ends up with double digit rebounds. For a team that can’t defensive rebound to save their life, give me his 7.8 a game. Now for DAL, look, Bogut hasn’t played since Dec 5th. They are tanking, they don’t want him, take the bodies and the pick. You get a PG locked at a good price for crazy years, and Amir comes off the books as well so it doesn’t lock up cap space. 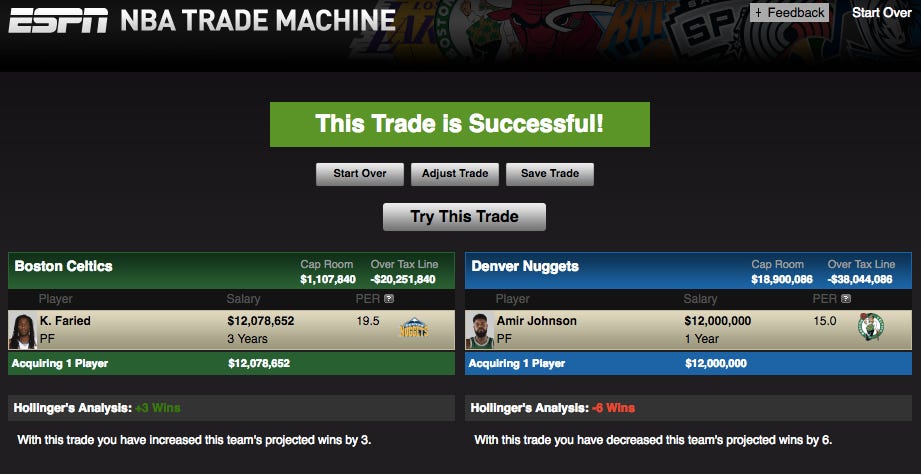 Why the Celtics should do this: We’re sticking with a theme, and that is big men. In case you somehow forgot in the 10 seconds since reading the first trade, the Celtics need help in this area. This works for a couple reasons in my mind. First, DEN and Faried are on the outs. He knows it, they know it, we know it, everyone knows it. He’s gone from not starting, to starting, to not starting. The Nuggets are similar to the Sixers in they have an abundance of big men, and Faried can maybe he available with the right deal. DEN is sort of like the Boston of the West. They love young prospects and draft picks. This trade gives them cap space and trade ammo. For the Celtics, it’s a no brainer. A young energetic big who can run the floor and rebound there is a lot to love. The hope is being on this team would improve his defense, because it’s spotty, but to me worth the risk. I also love it for the contract. I bet a player of Faried’s caliber commands like 17-19M a year in today’s open market. To get him at 12M makes me feel like this is the kind of deal Ainge would prefer to make.

Why the Celtics should do this: While I’m sure there are some that would hate to see Rozier go, if this trade is a possibility the Celtics have to do it. At 26, Vucevic is a solid 18/10 when he gets starters minutes. Like Faried he’s been in and out of the starting lineup, and we are already hearing chirps of tension between him and and the franchise. I love the price and the years of his deal, which is why he’s probably the most expensive of these options. For Orlando, they clear up a logjam, but also get a player in Rozier who is absolutely a better option than Augustin (29) or CJ Watson (32).

Also their GM is from Worcester for crying out loud. This should have been done yesterday.

Why the Celtics should do this: You know, with all the recent stuff that’s come out of Philly with Noel I’m not even sure I do it anymore, but for the sake of the blog if it were to happen, this is what I think a reasonable trade looks like. Here’s the problem though. The Sixers overvalue their big man trio the same way the Celtics overvalue their guard trio. Classic Mexican standoff. Both sides know that this deal makes sense for everyone, but they probably don’t do it out of nothing more than stubbornness. For the Sixers, you get young upside players, one who fills an immediate need, and enough picks to help your rebuilding process for a guy you might not be resigning anyway. For the Celtics it would be a risky move A) because of the price to resign him and B) because of health. My take on this might be that if they want Noel and are interested in paying him that kind of money anyway, just told off and sign him to an offer sheet.

Why the Celtics should do this: This trade machine is a little deceiving because Dieng just signed a 4/64M extension, which is primarily why this trade is a pipedream. However, with every 4th quarter meltdown, MIN’s roster becomes that much more available. Thibs already talked about making trades, and who knows, maybe Danny can hit up his old buddy and work something out. For the Celts, Dieng gives them a young inside presence who can score and also protect the rim. Obviously there would be a dip somewhere because he’s not playing next to KAT, but he’s a much better option than anyone that’s not named Al Horford. 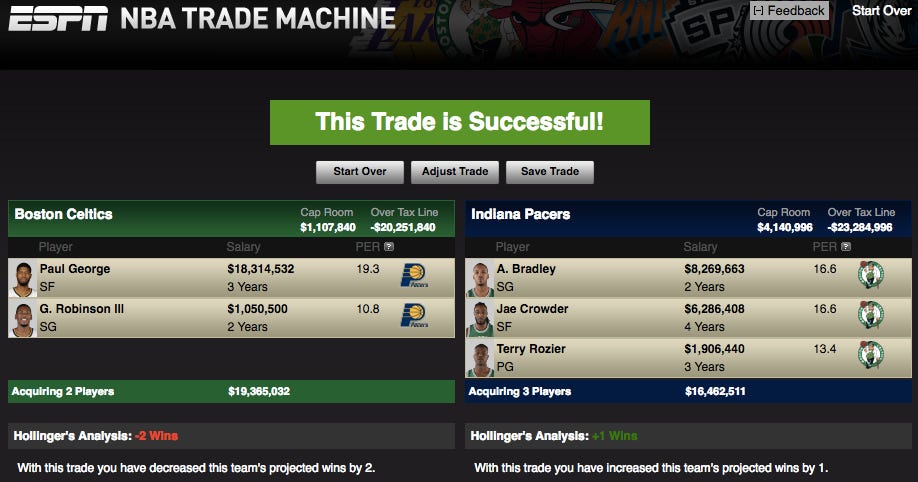 Why the Celtics should do this: Well, because PG13 is one of the best players in the NBA. This is a pipedream obviously because in the East, Indiana is still very much alive, so I’m not sure they would be willing to part ways with their franchise player. Also, the new CBA makes it very enticing for PG13 to stay where he is, so I must repeat, there is NO chance this happens. If it did, Boston sure is paying the price. This might almost be too pricey, but it’s the very minimum I bet it would take for IND to even listen. The hope with this move is if you pair PG13 with Isaiah and Horford, that other good players will come in FA because if not you’re kind of screwed. 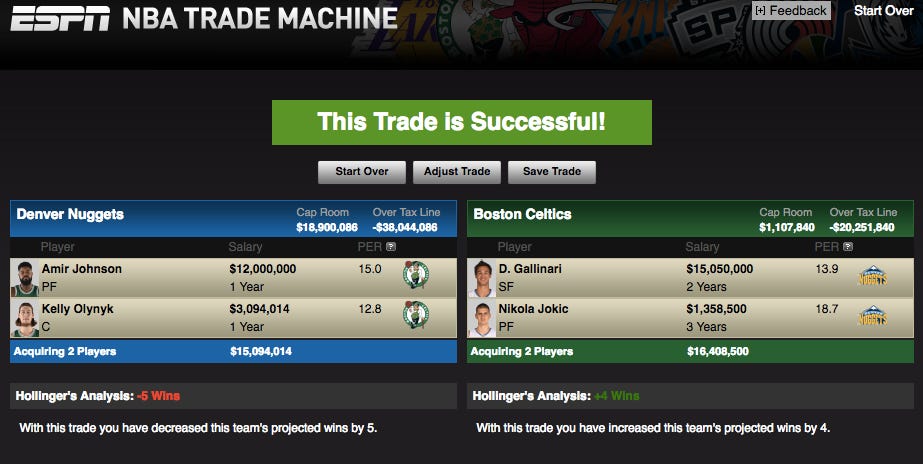 Why the Celtics should do this: Let’s say Denver wants to make a deal, but wants to keep Faried. Well in that case, I say Danny go for an extra piece in Gallinari. Jokic is a fine big on his own (you could argue the better of the two big men), and Gallo definitely helps this team offensively. Put a better way, he’s everything Olynyk is supposed to turn into but hasn’t yet. This helps DEN clear space and gives them assets as they continue to rebuild. The Celtics get a good young big man and another 6’10 player to help stretch the floor, which Brad loves to do. It’s a pipedream because both of these players are better than what the Nuggets would get in return, so unless they are truly mailing in their season, no chance. 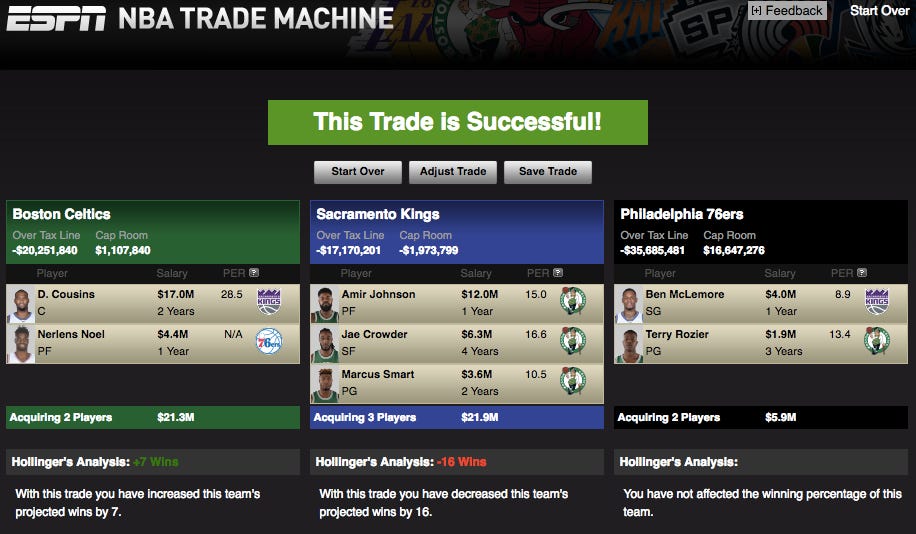 Why the Celtics should do this: Want to get nuts, let’s get nuts! What if there was a way for the Celts to bring in both disgruntled bigs who will probably poison your locker room? Well, there is! I do think it’s almost impossible to expect SAC to move Boogie, but you never know with all this shit that just went down. This trade gives them good players on great deals, while also helps them clear cap space this summer while giving them a good supply of picks. Trades like this are why the Trade Machine is an evil tool, or so I thought.

Why the Celtics should do this: Now this, this is something not even my twisted brain could dream up. This scenario was tweeted at me from a stoolie who has since deleted his tweet so I can’t fully remember where all the picks went. I think SAC got both BKNs, or maybe they were split between IND/SAC I can’t remember. Either way, this was too crazy for me not to include in the pipedream section. If you’re telling me the Celtics starting lineup would be Smart/Avery/PG13/Horford/Cousins I might almost forget about losing Isaiah. Jesus H. Christ. This right here is the most diabolical thing I have ever seen, and damn the ESPN Trade Machine for making it a thing. 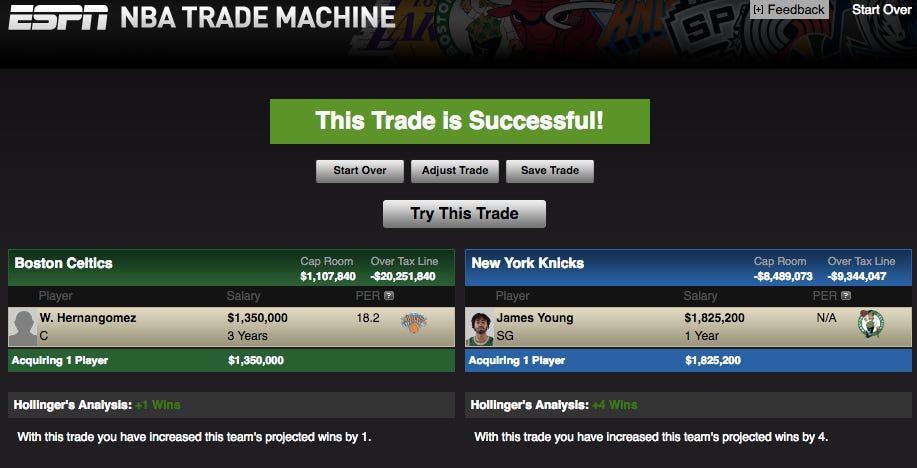 Why the Celtics should do this: Celts get an intriguing young big man on a good contract, while also send James Young to a team he’d probably get minutes for and dominate. Bad news is there really isn’t anything you would want from NY that they would consider giving up, and really I can’t ever see the Celtics and Knicks working something out. 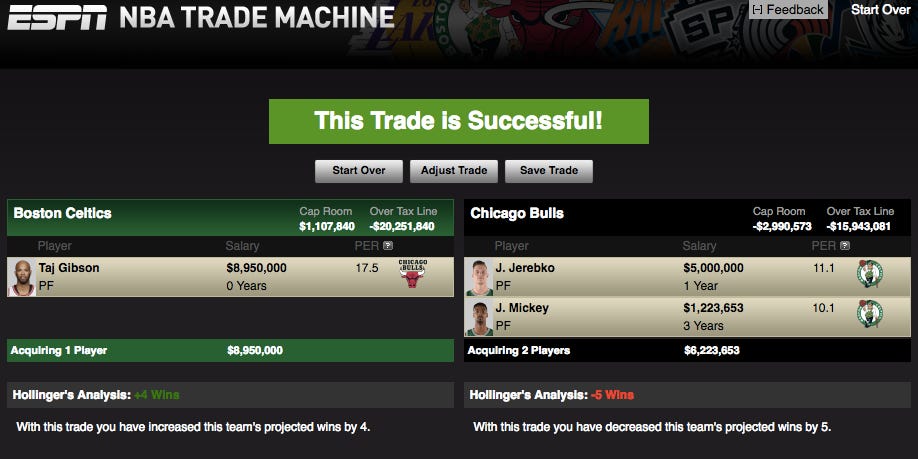 Why the Celtics should do this: Mostly because when you look at CHI’s roster, he’s really the only one you think they would consider trading, and even that’s a long shot because he plays an important role on a team that has turned out to be pretty good so far. However, what if Bobby Portis is the future, and CHI has no business in resigning Gibson after this year? Then they are at least getting something for him. Gibson gives the Celtics the low post rebounding/scoring they need, and more importantly he would no longer haunt them.

Why the Celtics should do this: Washington’s season has been a bit of a let down, and I don’t think you are prying Wall or Beal away without ridiculously overpaying, but something tells me the Wizards wouldn’t mind getting out from under Gortat’s deal if they decide to be sellers at the deadline. This way they get an expiring deal and some picks to help rebuild, and the Celtics get a legit 7 footer who is a legit rebounder. Also his price isn’t terrible when you consider Mozgov is at like 16M.

Now what are the odds ANY of these trades happen? If history has taught us anything, about 13%, even the realistic ones. At some point Ainge has to do something because he can’t hold on to all these picks, but that doesn’t mean he needs to have a blockbuster deal in order to have a successful deadline. Last year at this time it wasn’t a big deal if he stood pat, but he now has one less BKN pick to work with, not to mention the fact that teams are already hesitant on them to begin with, the pressure is on. Luckily for Danny, he can just read this blog.