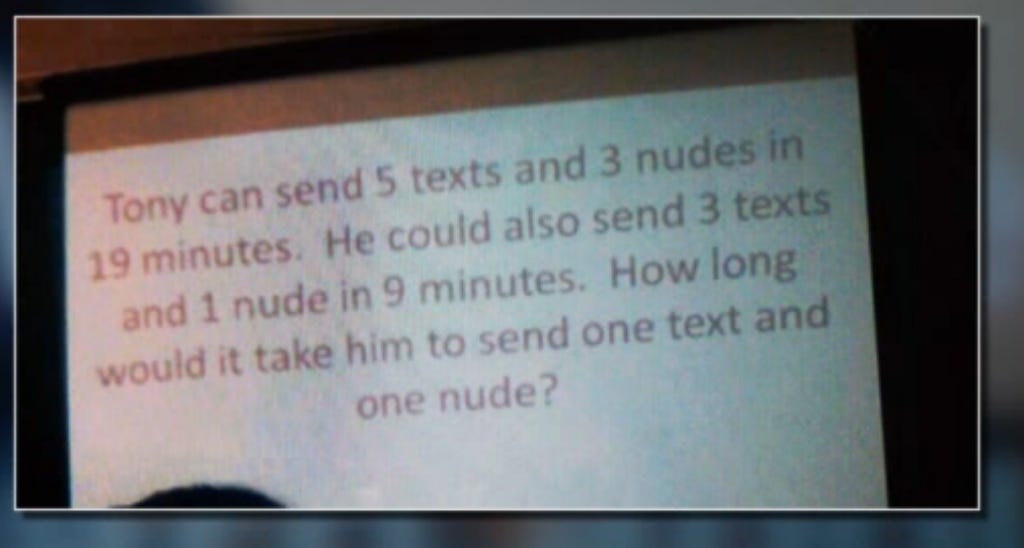 MIDDLEBURG HEIGHTS, Ohio — The father of two 14-year-old students at Middleburg Heights Junior High School in Ohio says he was angry when they showed him a photo they snapped of their algebra lesson from earlier this month.

It reads: “Tony can send 5 texts and 3 nudes in 19 minutes. He could also send 3 texts and 1 nude in 9 minutes. How long would it take him to send one text and one nude?”

“We addressed the teacher and kind of clarified exactly what happened, and in this case provided what we thought was the appropriate consequence, which was clarification that that was inappropriate,” school superintendent Michael Sheppard told Fox 8.

Nothing gets the blood flowing to young people like dropping the Pythagorean theorem mixed with some hypothetical nudes. Look, we all know that if Randy had six candy bars and Barbara’s bitch ass ate 3 and Susan ate one that Randy would have 2 candy bars. It’s called simple math for a reason, yall. It’s simple. But guess what, pals? That’s boring. You can’t teach math that way in today’s day and age. You gotta make it cool. It’s gotta be edgy.

“Becky With The Good Hair was firing off dank nudes to Joey at the rate of 3 per hour until her parent’s found out. Becky’s parents grounded her for one hour for each nude that she sent. Becky is grounded for 2 weeks. How many nudes did Joey receive?”

Relatable teaching used to be rewarded. Now, it gets you an article in the paper and a formal reprimand. Unfortunate to say the least.