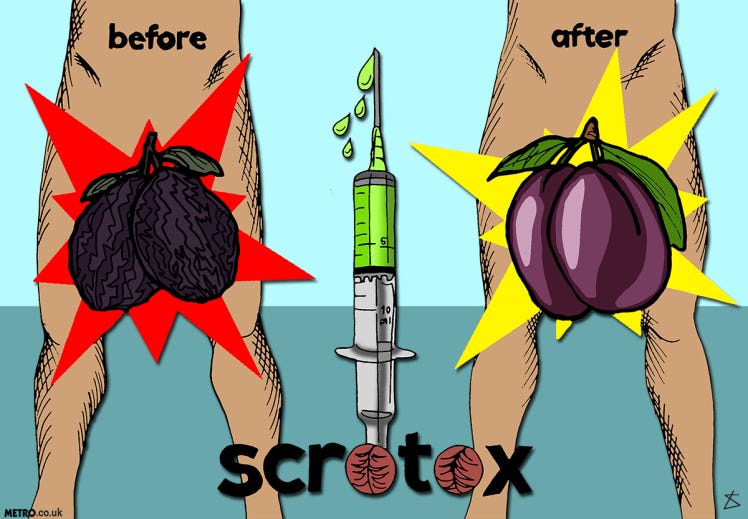 Mens Health – Scrotox: It’s Botox—the synthetic neurotoxin that blocks the release of a chemical signal from nerve to muscle, reducing muscle contraction—only, you know, for your scrotum. You might not think guys would want to willingly inject the chemical compound into their testicles. But one board-certified plastic surgeon, John Mesa, M.D., says he has performed Scrotox on 15 men, and he anticipates that number to rise significantly in 2017. Dr. Mesa, who refers to the procedure as “ball ironing,” says that more and more men are looking to seek the treatment for the same reason you’d want regular Botox: They want fewer wrinkles. When you inject Botox into the scrotum, it smoothes the wrinkles, according to Dr. Mesa. It also allows your testicles to hang down farther, which Dr. Mesa says makes them appear larger.

Are smooth balls even desirable? Aren’t the weird wrinkles exactly what balls have going for them in the first place? The greatest thing about balls is when they start shape-shifting and the wrinkles start moving on their own like hot lava from a volcano, or an alien’s brain, or that image of water moving on planet Earth in a National Geographic show. Now it might be obvious by, oh, I don’t know – my entire physical being – but I’m a fan of altering my body for cosmetic reasoning. Botox is a weapon I’ve used for pretty much my entire adult life, and if the world were ever in the unfortunate situation where the only way to prevent fillers and injectables from being discontinued was to kill a human baby, I would volunteer as tribute to poison that babyfood so fast you wouldn’t be able to say “body dysmorphic disorder.” I have Botox in my forehead and jaw, Juverderm in my lips, Voluma in my nose, two silicone bags full of saltwater in my tits, I’ve done too many weight loss laser procedures to count – but this, this new trend is going too far.

Hear all of our takes on smooth balls, wrinkled balls and much much more on this week’s KFC Radio: