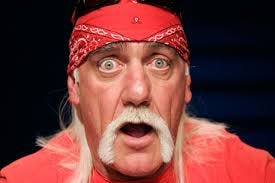 CLEARWATER, Fla. (AP) – Hulk Hogan could have used his signature leg drop on thieves who stole a delivery from the front porch of his Florida mansion.

Clearwater police released a video Friday showing four women pull into the driveway of the former pro wrestling champion’s mansion last weekend. Three rush up the steps and pick up the package, but apparently startled by a noise they drop it and run back to their car. After a few seconds, three run back up the steps, open the package, remove the contents and flee. Police did not say what was stolen.

I love the term porch pirate. In fact, I kinda wanna go steal some stuff from my neighbor’s porch just because I’ve always wanted to be a pirate. The issue was that I didnt have a ship or crew. I’m sure I can wrestle up some scallywags, though. Shoudnt be an issue at all now that I dont even need a ship.

Stealing from a mansion with your car isnt the way to go if you’re going to be a thief. You have to assume that every nice house in America has some sort of video equipment at this point, right? Not to mention that stealing Amazon Prime boxes is the ultimate crap shoot. Sure, you might get good stuff every now and then but then you steal some Prime boxes from Hulk Hogan’s mansion and you get some stuff that you’ll never use.