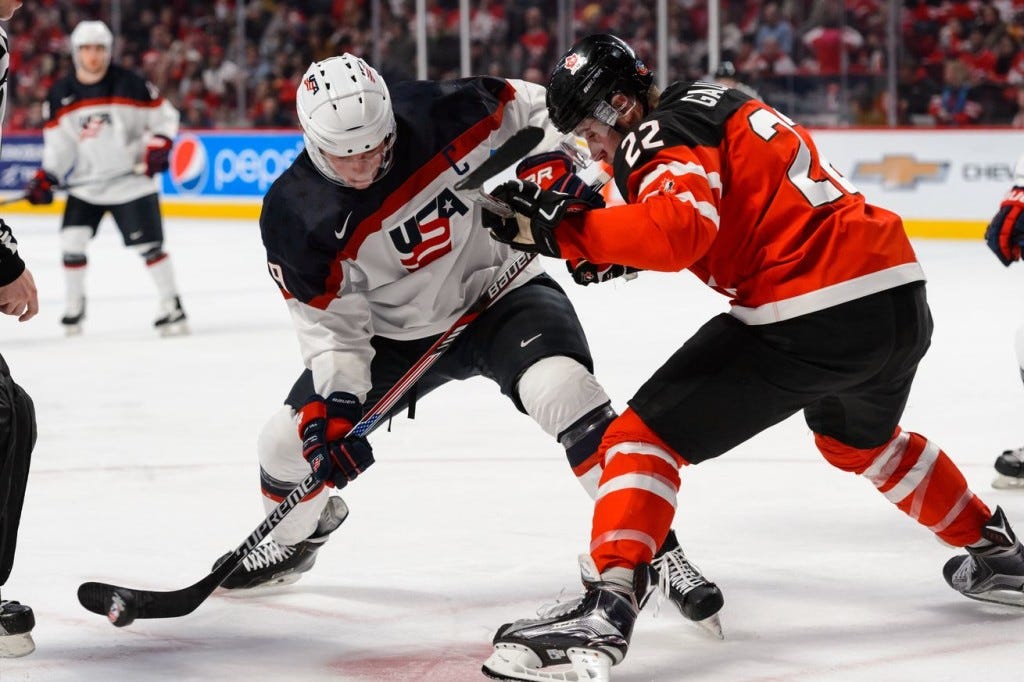 A week from today, the puck drops to start the 2017 World Junior Championship. Year in and year out, the World Juniors is one of the best tournaments in all of sports. It still hasn’t gotten nearly as big as it should here in the United States, but progress has definitely been made. Each year we get to spend the week between Christmas and New Years watching the next generation of NHL talent make a name for themselves while playing for their country. But here’s the one problem with the tournament this season–most of the next generation of NHL talent is already in the NHL. One of the biggest stories in the league so far this season is the flood of young talent in the league. You’ve got kids like Connor McDavid, Patrik Laine, Jack Eichel, Auston Matthews, Mitch Marner, Ivan Provorov, Zach Werenski, David Pastrnak, the list goes on and on. They are all some of the top players in the NHL right now and all of them could be playing in the World Juniors this year. That’s not to say that you won’t be seeing elite level talent during this tournament. But the top 18/19/20-year-olds in the world have already been able to make the jump to the NHL. So yeah, obviously the World Juniors isn’t going to be quite the same this year as it’s been in the past. But there are still a few big time players out there who most people will be really seeing for the first time. So buckle in and lace up. Let’s talk WJC.

We’re going to keep this pretty quick considering the match ups that most people want to see will be in Group B. But Group A consists of Finland who won gold last year, Sweden who finished 4th last year, Czech Republic, Denmark, and Switzerland. Obviously the big two teams that everybody will be watching to come out of this group will be Finland and Sweden. So let’s start with the Finns real quick. 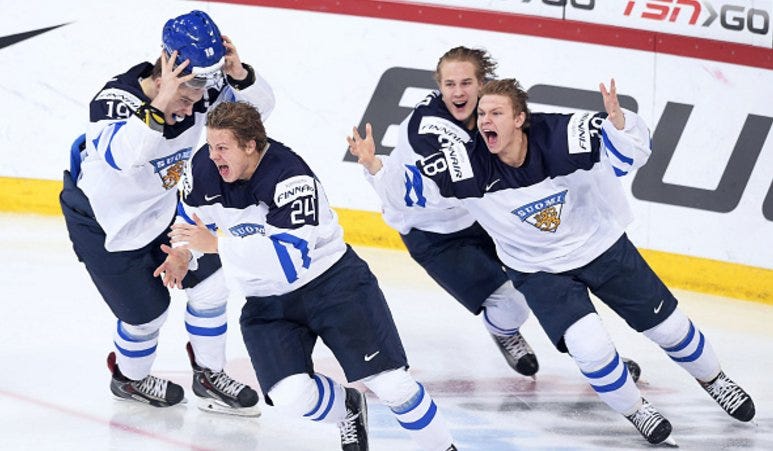 Patrik Laine. Jesse Puljujarvi. Sebastian Aho. Kasperi Kapanen. All guys who played a major role on the 2016 gold medal team last year, and all guys who will not be on the team this year. Puljujarvi was the scoring leader and the MVP of last year’s tournament. He’s been struggling a little so far this season in Edmonton but he won’t be made available for Team Finland. Patrik Laine won the MVP at the World Championship last year. Not the World Juniors, but the World Championship. Then he made Finland’s World Cup roster and is currently 3rd in the NHL in scoring with 18 goals. Aho has been killing it in Carolina and Kapanen, who scored the gold medal winning goal last year, will be staying in the AHL. So yeah, that’s 4 major pieces to a gold medal team that they’ll be without this year. Keep in mind that Finland also won the U18 Championship last year and the team will be stockpiled full of 2017 draft eligible players. Kids like Miro Keiskanen and Kristian Vesalainen will be high draft picks in June. But it’s gonna be ridiculously hard for Finland to medal again this year without those 4 guys, let alone trying to repeat as champions. 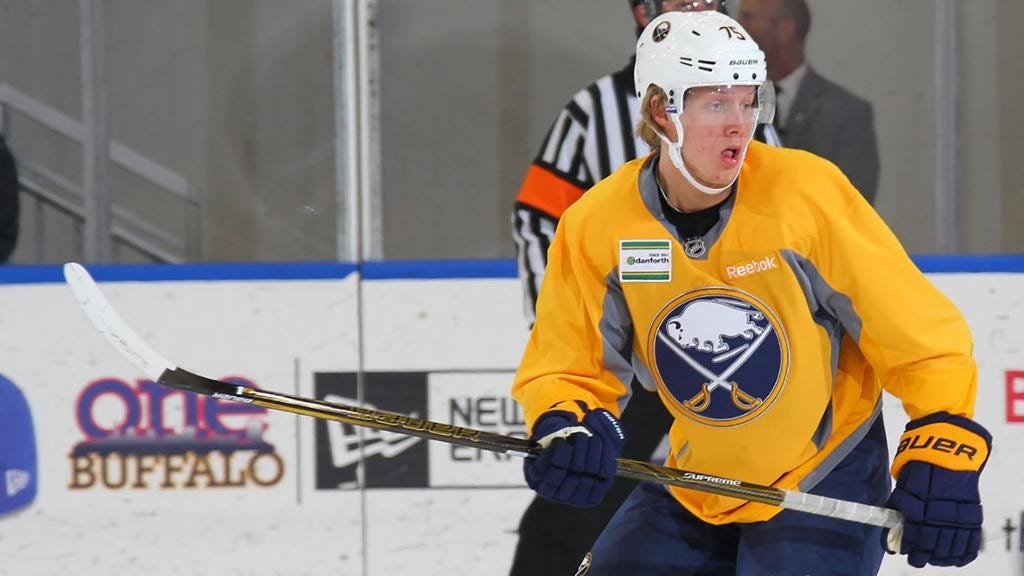 Sweden will be the favorites to come out of Group A with a #1 seed. This will bet the first chance for Alex Nylander to take over Team Sweden by himself without his older brother William on the roster. Nylander and Rasmus Asplund are both a pair of 2016 Sabres draft picks that should spark the Swedish offense, along with 2015 Minnesota Wild draft pick Joel Eriksson Ek. On the back end, Sweden continues to produce some of the best puck moving defensemen in the world. Look for Jacob Larsson and Gabriel Carlsson to lead the way as veterans on this team, as well as Flyers prospect Felix Sandstrom to lock it down for the Swedes in between the pipes. Sweden and Finland play each other on December 29th. Unless something goes seriously wrong for either of these teams, I can’t see them losing to the Czechs, Denmark or Switzerland. So that December 29th game will most likely decide who gets the 1 seed and who is #2.

Now on to the part of this blog that really matters. The group of death. Canada, Russia, the United States, Slovakia and Latvia. Russia finished with a silver medal at last year’s tournament. The United States pulled away with the Bronze. And Canada, who will be hosting the tournament this year, looks to bounce back after not even placing last year. Slovakia and Latvia will unfortunately become innocent casualties to the war that will be waged in this group over the next few weeks. So let’s start with the back-to-back World War champs on this one. 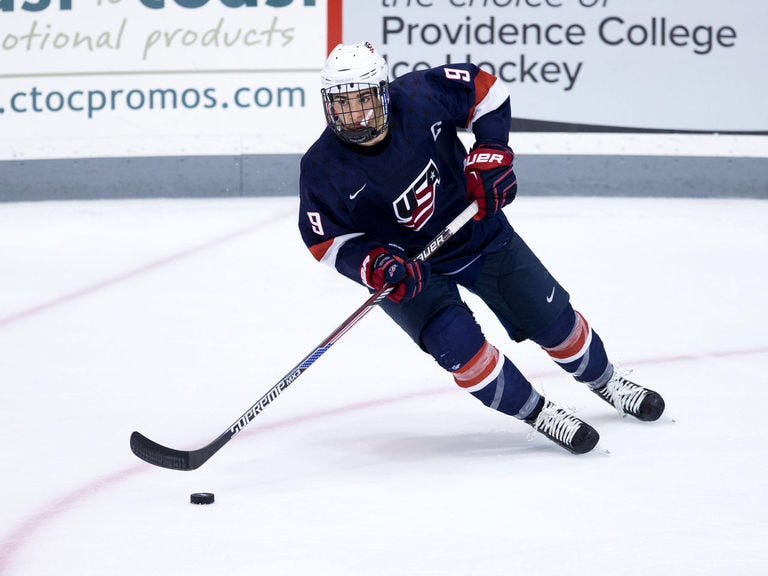 Offensively this might be one of the best US teams put together. Even with North Dakota’s Brock Boeser missing the tournament due to injury, there’s a great combination of size, skill and speed all over this lineup. 2016 Minnesota Wild 1st round pick Luke Kunin was just named as the team’s captain. Then you go down the list and you have 2016 7th overall pick Clayton Keller out of BU, 11th overall pick Logan Brown playing for Windsor in the OHL, 19th overall pick Kieffer Bellows out of BU, 26th overall pick Tage Thompson at UConn, Alex DeBrincat who could have easily been a 1st round pick last year. Colin White who you’ll see in Ottawa later this year once his season at Boston College wraps up. Jeremy Bracco who is yet another blue chip caliber prospect in the Maple Leafs pipeline. If you need an easy way to kill a few hours, just YouTube the highlight videos for all of these guys. It’s a crazy lineup of talent. Sure, having guys like Auston Matthews and Jack Eichel could obviously help out Team USA a ton. But when you look at who they have at the forward position, they seem as deep as any team in this tournament.

Defensively is where things get a little dicey for team USA. The big names to watch for on the blueline are 2016 Blackhawks pick Chad Krys and 2016 Bruins pick Charlie McAvoy. Both of them play at BU and I’m pretty sure half of the USA roster will be Terriers. But McAvoy and Krys are the returning players on the blueline from last year’s team. And then in net you either have Tyler Parsons from London, Joseph Woll from BC or Jake Oettinger from BU. All 3 would be newcomers to this team. So again, there aren’t many familiar faces on the back end for this team. And when you look at the roster Team Canada has put together, you’ll realize that’s a bit problematic. 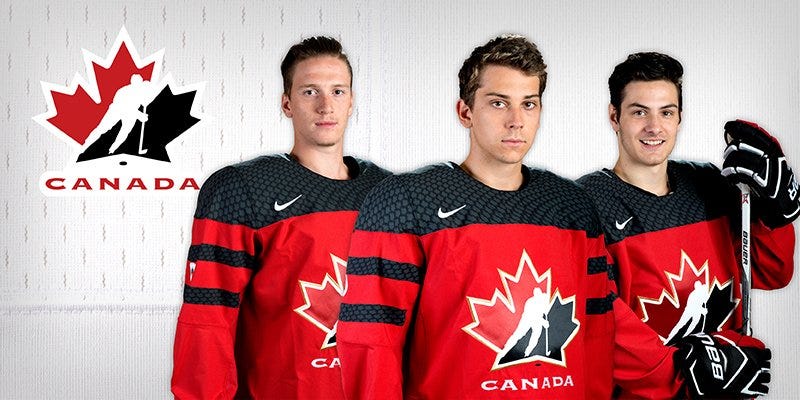 There are very few scenarios that are more disastrous than Team Canada not even placing at the WJC. To say last season was a disappointment for the canucks would be an understatement of the century. So what do they go ahead and do this year? Well they put together a roster that looks like a clear cut favorite to win Gold. Remember when we were just rattling off all the offensive talent Team USA will have at their disposal this tournament? Well let’s add a little more fire power to that and now you’ve got Canada’s roster. 3rd overall pick from 2015 Dylan Strome was just named team captain earlier today and how Strome hasn’t stuck around in Arizona is bananaland. 129 points in Erie with Connor McDavid as his linemate in 2014-15. 111 points in Erie last season with just Alex DeBrincat. He’s probably the best player not in the NHL right now. And then you have 2016 3rd overall pick Pierre-Luc Dubois looking to prove that he was worthy of that draft pick after not sticking with Columbus this year and having a rough go to start this season back in Cape Breton this year. The Blue Jackets passed over Puljujarvi for Dubois, who has NHL size and NHL scoring ability. This will be a huge stage for him so look for Dubois to make the most of it. And then there’s Julien Gauthier. Another big body (6’4″ 224 lbs) coming out of the QMJHL with unreal scoring ability. Imagine those two on the wing with either Strome or a guy like Mathew Barzal up the middle. Barzal was named as assistant captain to the team this year and it’ll most likely be the last time he plays for Team Canada at the World Juniors. Because if he’s not with the Islanders next season then that franchise is even more mismanaged than previously thought.

Before we get to the blueline for Team Canada, we have to address the #1 overall pick sized elephant in the room. 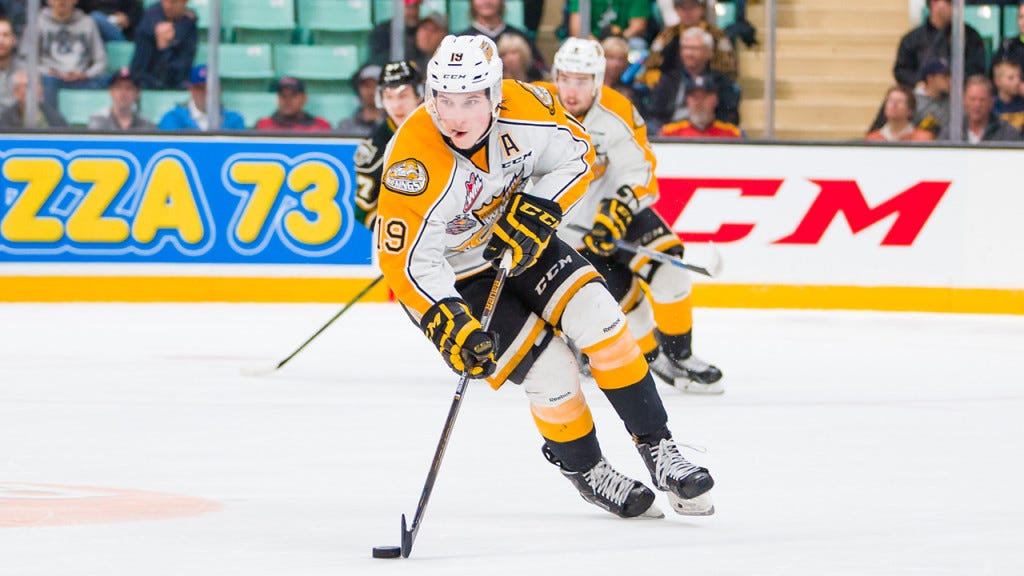 Every year the World Junior Championship is a great chance to watch the next first overall pick make a name for himself before he makes the jump to the NHL. It’s also a great way for fans of teams who suck to get a good look at their potential savior. This June, Nolan Patrick will be the 1st kid to hear his name get called but he’s been bit by the injury bug this year so we won’t be seeing him at the WJC. He’s not quite a generational talent like Connor McDavid and potentially either Auston Matthews or Patrik Laine. But he’s an elite level player who would definitely make this tournament more interesting. But I guess we forge on anyway.

Defensively the Canadians are just as deep as they are up front. Thomas Chabot is the only returning face to the blueline for Team Canada and he’ll also be one of the team’s captains. But then you’ve got Jake Bean and Kale Clague who are both monsters in the WHL. Then you’ve got Flyers prospect Philippe Myers who has managed to turn himself into one of the top defensive prospects playing for Rouyn-Noranda in the QMJHL. The Flyers have been striking gold with D prospects (i.e. Shayne Gostisbehere, Ivan Provorov, Travis Sanheim, etc.). Myers is just another name to add to that list. Then you’ve got another Flyers prospect Carter Hart in net for Team Canada. Hart was the WHL goalie of the year last season and will most likely be Canada’s #1 moving forward. 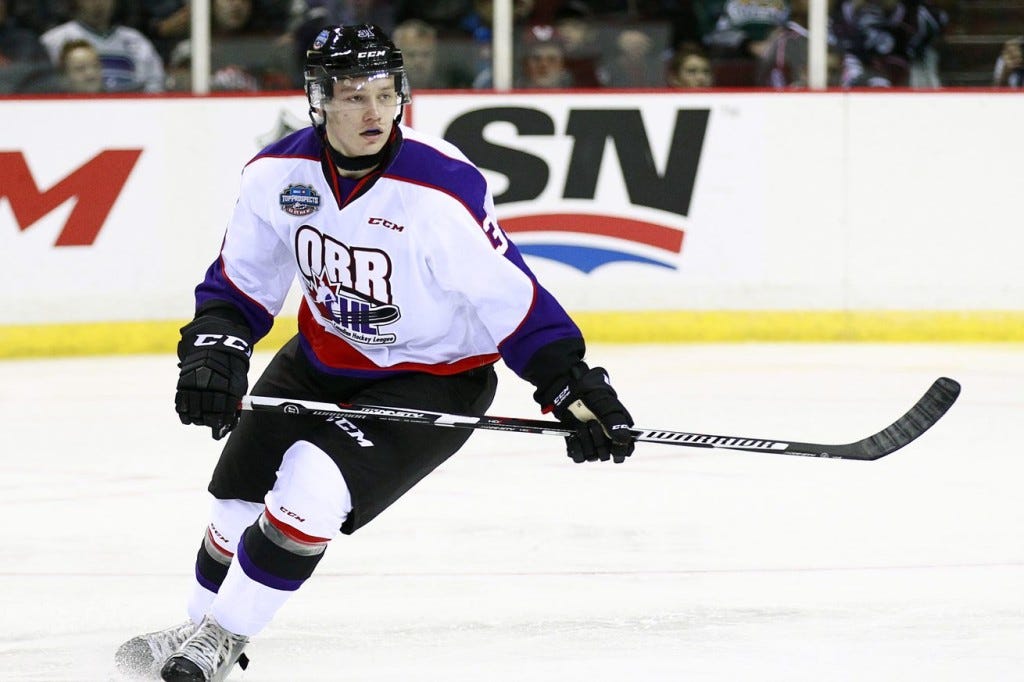 I’ll be honest. I don’t know a ton about this Russian team. I know that Mikhail Sergachev (Montreal ’16) is a high end prospect on the blueline. Usually I’m cautious about Russian defensemen but like Ivan Provorov, Sergachev is spending his junior days in the WHL instead of staying home in the mother land. Then the Russians have German Rubtsov (Philadelphia ’16) and Nikita Korostelev (Toronto ’15) at forward. You may remember Korostelev from this beauty featured in the Dangle Days recap a few weeks ago.

Other than that, however, I’m not too familiar with the Russians. With that being said… you can never take them lightly.

Group B Games To Watch:

Obviously the marquee game coming out of Group B will be USA vs Canada on New Years Eve. That game will be at 3pm EST. 2 days before that, USA will play Russia at 3:30 on December 29th. And Canada opens up their tournament against the Russians on the 26th at 7pm. USA plays on the 26th against Latvia so hopefully that’ll be a nice confidence booster for the boys to start their tournament with.

Realistically… I see Canada coming out of Group B with the #1 seed and then USA with the #2 seed. Which means you’ll most likely see Team USA face the Czech Republic in the quarterfinals and then if they beat the Czechs in the quarters, then they’ll have Sweden in the semi-finals.

Gold – Canada (that hurt to write)

I’ll repost this blog at some point over the weekend before the tournament kicks off. Then we’ll have live blogs for every Team USA game. Make sure to follow me on Twitter @BarstoolJordie for updates/videos/nonsense/etc.