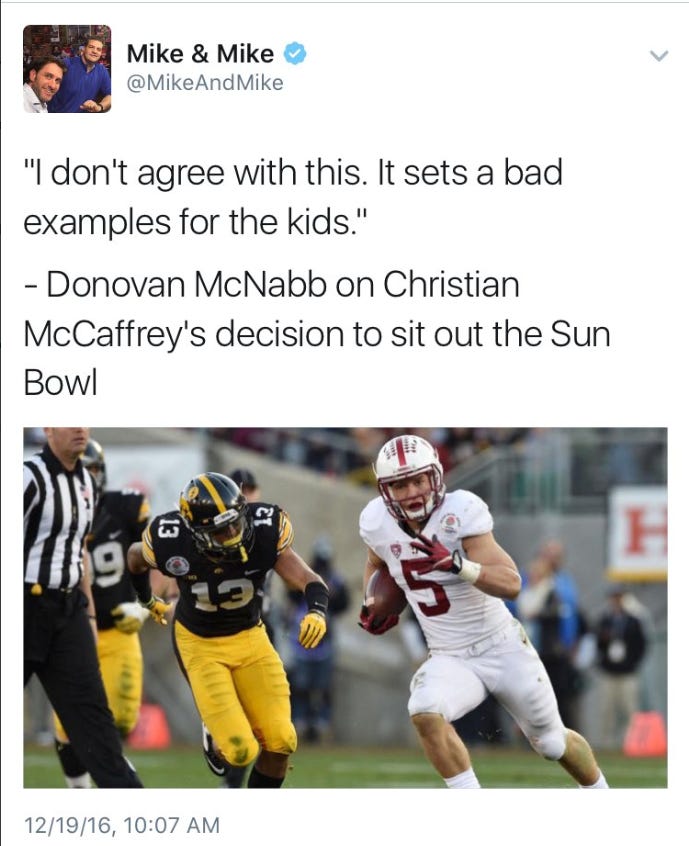 Donovan McNabb wants you to think about the message to the kids. The same Donovan McNabb who has had not 1 but 2 DUI’s, he wants you to think about the kids when it comes to a college football player who makes zero dollars sitting out a meaningless Bowl game so that he can ensure his health when he takes the next step in his career. Won’t someone please think of the Kids!

Forget the kids thing because we can all agree Donovan McNabb is a fool. Why would anyone ever have a problem with a guy sitting out a Bowl game that means absolutely nothing so that they can get to the NFL Draft healthy. Do I need to remind you of this.

Jaylon Smith, a top 5 pick tearing his knee in a meaningless Bowl game just last year. But Big Cat he had insurance? Ok, sure, you know that insurance pays a fraction of the career earnings of a Top 5 pick and that’s not even factoring in the fact that he may never be the same player again because of a game that meant absolutely zero to his career.

And don’t get me started on the hypocrisy with all of this. The fans talking about “loyalty”. College Coaches leave whenever they want. Did Tom Herman coach Houston on Saturday? No, because he  took the next step in his career, so Christian McCaffrey can’t do the same? Or how about Coaches that take away scholarships when a player gets injured. Jim Harbaugh pulled Kain Colter’s scholarship AT STANFORD when he hurt his shoulder in High School. The same Kain Colter that wants to unionize College players and stop letting the NCAA make millions of dollars off their free (minus 4 years of school) labor.

Listen the bottom line is this. I’m not smart enough to figure out a solution to college players getting paid. There are a million hoops to jump through until we get to that point. But until we get to that point I have no problem with these guys looking out for themselves. For Christ Sakes NFL contracts aren’t even guaranteed. Cry about loyalty, cry about quitting on your team, cry about anything you want, but if you were in this same exact situation you would do the same exact thing. The corporations that talk about loyalty are the first guys to throw you on the trash pile the minute you no longer have value. That’s life, if you don’t look out for yourself no one will. All in favor of what McCaffrey and Fournette are doing.

PS
With all that said if any Western Kentucky or Memphis players think about sitting out the Barstool Sports Presents Pardon My Take Presents The Wet The Beak Ponzi Scheme Awareness Boca Raton Bowl, then I’ll throw a fucking hissy fit. I didn’t fake buy a Bowl to get bamboozled by a College Kid.