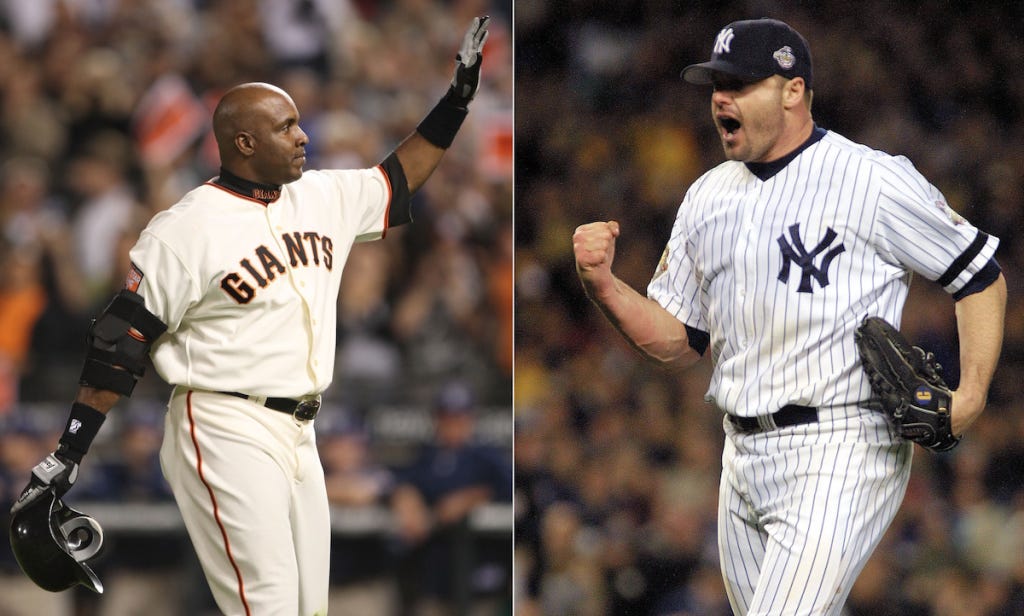 We all knew this was gonna happen, right?

Feitelberg’s take from a couple weeks ago hit the nail on the head — if Bud Selig is going into the Hall of Fame, then there’s no reason why the best of the best from the Steroid Era should be kept out anymore. Keepers of the gate, you lose. The almighty enabler is in. And you know what? I don’t give a flying fuck that Selig is in. He should be in. Baseball flourished under Selig’s watch, and it flourished because he, along with all of the owners, turned a blind eye to the widespread use of steroids within the game. Everybody made millions, and the fans were loving every second of it. Revenue was up, attendance was up, ratings were up, average annual value of free agent contracts were up. Everybody benefitted. It was one big roided up circle jerk.

Was it cheating? Of course it was. But guess what? Baseball is the entertainment industry. All professional sports are. We pay to go to the games, and we watch on TV to be entertained, not to see sportsmanship and integrity. You think those jacked dudes in the action movies aren’t juiced up? Of course they are. But why do we care? It’s just entertainment. That’s exactly what the Steroid Era was — the most entertaining era in the history of the game of baseball.

If you wanna tell me that you’re not voting for Manny Ramirez because he failed two tests after the drug testing policy was implemented, then I can buy into that. But for the players who were juiced out of their minds during a time period in which these drugs weren’t even banned from the league, the best of the best of those players should be Hall of Famers, and they will be.

I agree with Jeff Passan here that the rate in which Barry Bonds and Roger Clemens are appearing on the publicly-made ballots (73.6%) will likely drop, because there are still hundreds more that have yet to be submitted, but I think it’s safe to say that Bonds (44.3%) and Clemens (45.2%) will see significant increases in their percentages from a year ago, getting closer and closer to the 75% that they need for enshrinement. I also think that Selig’s induction has a lot to do with that. Based on purely the numbers, we’re talking about two slam dunk first-ballot Hall of Famers, who are arguably the greatest position player and greatest starting pitcher of all-time.

Although neither player actually failed a PED test, there was more than enough evidence to implicate both players of using performance-enhancing drugs during their playing careers. I’m sure more than a handful of writers will use that as grounds to never vote in guys like Bonds and Clemens. But those voters need to get over themselves. It’s a fucking baseball museum, guy. When I go to the definitive baseball museum, I want to see the player who hit more home runs than anybody and won more MVP awards than any other player in history, and I want to see the pitcher who won more Cy Young awards than any other pitcher in history.

Will they get in this year? Probably not. But they’re picking up steam, and they’re going to get in eventually. And when they do, some people will be upset about that. Me personally, I’m not going to be jumping for joy or anything when they get in. I would undoubtedly vote for both of them if I had a vote, but there’s a part of me that definitely feels odd about rewarding players who cheated. But the fact of the matter is that if Selig is in, all the big name steroid guys should be in, too. Otherwise, it’s just extremely hypocritical to have the commissioner who enabled the Steroid Era in the Hall, alongside managers who won championships with steroid guys on their rosters, but yet the players are somehow where we draw the line.